The White Wagtails (Motacilla alba alba) are small perching birds that occur in much of Europe and Asia and parts of north Africa. Very rarely, they breed as far north as Alaska.

Those found in the milder parts of the range are typically resident; the others typically migrate south to Africa for the winter.

The partially migratory British and Irish form – the Pied Wagtail (Motacilla alba yarrellii) – appears to have expanded their breeding territories to include areas on the adjacent European mainland.

Wagtails were named for their characteristic long, constantly wagging tails.

They inhabit open country, often near human settlements and water. 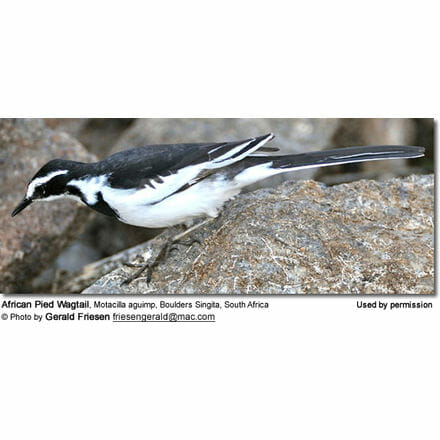 These slender Wagtails measure about 16.5 – 19 cm in length, including their long tails.

The plumage is grey above and white below, with a black cap, white face and black throat.

The Pied Wagtail’s plumage is a generally blacker than that of the nominate race of Western Europe.

They mostly feed on insects, favoring bare areas for foraging, where they can easily spot and pursue their prey.

They generally nest in the crevices of stone walls or natural and man-made structures.