The White-winged Doves (Zenaida asiatica) – also known as Singing or Mesquite Doves – are large, semi-tropical and pigeon-like doves that occur naturally in the Americas.

They are sometimes considered conspecific (one and the same species) with the West Peruvian Dove (Zenaida meloda); however, differences in vocalizations and morphology are credible arguments against this theory.

In fact, they may best be placed into the bird genus Columba (typical pigeons) than the dove genus Zenaida (American doves).

White-winged Doves occur naturally in the United States from the Southwest east to Texas and Louisiana, south to Mexico, Central America and the Caribbean, into parts of western South America. Introduced populations have established themselves in Florida, USA.

They have been increasing their range northward. In fact, they have been reported as far north as Alaska to Ontario, Maine, Newfoundland, and most places in-between.

Most of them are seasonally migratory. They breed in the United States and northern Mexico and travel south to Mexico, Central and South America, and some Caribbean islands for the winter. However, those populations occurring in areas where food is available year-round – in the southern parts of their range – tend to be year-round residents.

They inhabit scrub, woodlands, desert, citrus orchards, agricultural fields and residential areas throughout their range. Many farmers in Mexico refer to them as “la plaga” (the plague) as large flocks – sometimes thousands of them – may descend upon a single field of grain, and decimate it (particularly after the breeding season). 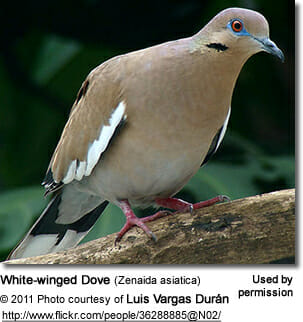 The nominate form “Z. a. asiatica” and ssp. “meansii” are the most common and widespread of the white-winged dove species. 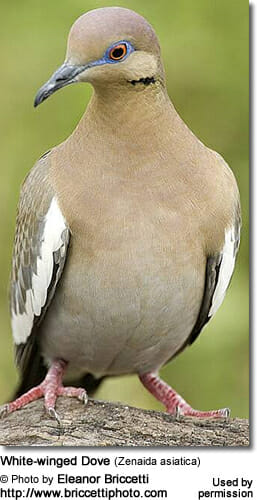 They have small heads and mostly greyish brown upperparts and greyish underparts. The wings are blackish with broad diagonal bars that are most noticeable in flight, but can also be seen at rest. The square tail has whitish tips. There is a black streak on each cheek. The skin around the eyes is featherless and bright blue. The eyes legs, and feet are red or pinkish-red.

Adult males and females look alike; except males have a slight glossy, purple sheen on their heads and necks, and tend to be slightly larger in size.

Immature birds look like adults, except a duller and greyer plumage and lacking the black cheek streaks and blue eye rings of the adult. Their legs and feet are brownish pink; and the eyes are dark brown to black.

They are larger than most doves and the white wing patches on the upper wing are unique features amongst doves occurring in the Americas.

In the United States (or northern breeding range), nesting usually commences in late April / May and goes on until August. Sedentary populations in the southern parts of their range may breed at any time of the year. Pairs, and often also their young, commonly remain together for life in family groups.

The males seek out areas with easy access to food and water and suitable nesting areas; and they will defend their breeding territories against intruders and competitors. Young males of breeding age will then try to attract mates with cooing and visual displays, wing and tail fanning and bowing. Once a good match has been found, the pair involves in mutual preening and feeding. After copulation, the females select nest sites within their mates’ territories. Females will explore tree cavities, forking tree branches and branches with plenty of shade and cover; sometimes taking over abandoned nests of other birds.

The construction of the nest usually takes 2 – 5 days. Both parents cooperate in building the flimsy, shallow, concave platform nests, which are mostly made of twigs, as well as weed stems, grasses, mosses, roots and other nesting material. The males examine and bring appropriate twigs or plant material to the females one at a time. The females wait at the nest sites and decide which ones to incorporate into the nests. The nests are typically situated in trees or low bushes.

The average clutch consists of two cream-colored to white, unmarked eggs which measure 0.7 – 0.9 inches (1.9 – 2.3 cm) in diameter and are 1-2 – 1.3 inches (3 – 3.2 cm) long. The eggs are incubated for 13 -15 days by both parents in regular shifts. The males often brood from mid-morning until mid-afternoon, and the females from mid-afternoon through mid-morning. Since the incubation commences with the first egg, the first-laid egg has an advantage, as it leads to the older chick hatching first, being stronger than its younger sibling and being more successful in demanding food from their parents. The hatchlings are blind and naked, except for long buffy or whitish down feathers.

For the first four days, the chicks are fed “crop milk” – a protein- and fat-rich secretion that is chemically similar to mammalian milk. This diet is gradually supplemented with regurgitated seeds, and by the second week, the chicks’ diet is mostly composed of seeds. White-winged Doves are known to attempt luring potential threads away from their nests by pretending to be injured (the typical “broken wing” display).

The young fledge (leave the nest) when they are 13 – 18 days old, 14.5 days being the average. The males continue to feed the young while the females may start on a new clutch within 3 days of the young having fledged or shortly after having lost a clutch. On average 2.2 chicks are raised in a season. Young birds can start nesting as soon as 2 – 3 months after leaving the nest.

Migratory populations commence their migration south to their wintering territories in mid to late September.

Depending on their range and seasonal availability, White-winged Doves feed on various fruit, a variety of seeds and grains from cultivated fields, cactus fruit, berries and acorns.

Those occurring in desert areas (particularly in the Sonoran Desert) rely heavily on the nectar, pollen and fruits of the saguaro cactus (Carnegeia gigantea) for both nutrition and water. They are also important pollinators of this cactus.

In residential areas, they visit bird feeders, where they feed on seeds and cracked corn dropped on the ground.

They supplement their diet with snail shells and bone fragments extracted from raptor pellets or mammal feces. The calcium obtained from such sources is needed for eggshell and crop milk production. They will also swallow small stones to help with digestion.

Their cooing calls are drawn out booo-hooo hoo-hoo, reminiscent to ” who cooks for you” vocalizations. When spotting a thread, a drawn-out “hoo-a” sound warns others in the group.