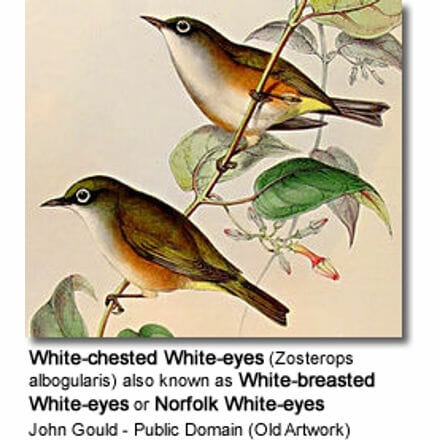 It is endemic to Norfolk Island – a small island in the Pacific Ocean between New Caledonia and New Zealand. Its only habitat is a 5 km² large forested area around Mount Pitt on Norfolk Island where it lives solitary.

It is regarded as one of the rarest birds in the world. Since 2000 the Australian government has considered the species extinct.

It reaches a length up to fourteen centimetres and therefore it is one of the largest white-eyes. The wingspan is 7.5 cm and the weight is about 30 grams. Its appearance is characterized by a pale green head, an olive green colored neck and white throat and belly parts. A further feature is a conspicuous eye ring of white feathers.

Males and females are colored similarly.

Its diet consists of fruits, berries, nectar, and insects.

In the breeding season from October to December the couple build a cup-shaped nest in which two white eggs are laid. The incubation time lasts eleven days and another eleven days later the juveniles became fully fledged.

The largest threats are habitat destruction and invasive species. The decline of the White-chested White-eye began as the introduced Silvereye (Zosterops lateralis) became naturalized on Norfolk Island. It displaced the White-chested White-eye from its breeding range. From the 1940s rats destroyed the nests and clearing of the forests led to a severe decline in the population to only 50 individuals in 1962. In 1986 the Norfolk Island National Park was established to save this bird from extinction, but because of the fluctuation of this species, surveys often remained unsuccessful. In 1978 only four individuals where monitored, a sighting in 2000 resulted in one individual; bird watchers claimed to have seen the bird in 2005, however official surveys have not recorded the species since 1980. A predator-exclusion fence was built around the last remained habitat in the Norfolk Island National Park