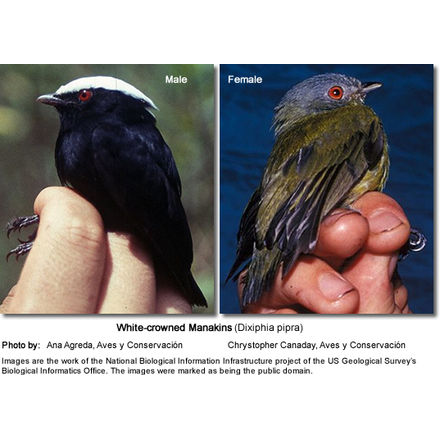 The White-crowned Manakin, Dixiphia pipra, is a tiny passerine bird in the manakin family. It is a resident breeder in the tropical New World (Americas) from Costa Rica to northeastern Peru and eastern Brazil. It was formerly placed in the genus Pipra, but its syringeal anatomy favours its separation as a separate genus Dixiphia. This genus is currently considered monotypic (a genus consisting of only one species), but Hilty suggests that more than one species may be involved.

It is common in mountain foothills, breeding mainly between 800-1600 m, although in northeastern Venezuela it apparently occurs down to sea level.

This is a species of the understory of wet forest and adjacent tall second growth.

The nesting behaviour is undescribed, but presumably resembles that of other manakin species in which the female lays two brown-speckled white or grey eggs in a cup nest . In all manakin species, nest-building, incubation for 18-21 days, and care of the young are undertaken by the female alone, since members of this family do not form stable pairs.

Like other manakins, this species has a fascinating breeding display at a communal lek, but the leks (competitive mating displays or dancing grounds) of this species are much more dispersed than the small cleared areas favoured by most manakins, with 3-4 males just within earshot of each other, and up to 100 m apart. Males fly between horizontal perches 3-12 m high and up to 50 m apart with a swooping flight, or, when a female is present, a slow butterfly-like flutter.

The White-crowned Manakin is, like its relatives, a compact short-tailed bird with a stout hooked bill, dark legs and striking male plumage. It is typically 9.7-10 cm long, weighs 12 g, and has red eyes.

The adult male is mostly black with a white crown which can be erected as a low crest. His call is a buzzy jeeeeeee, louder and preceded by a popping p-p-p chee when displaying.

The female and young males are olive-green with a grey head and throat, and grey-green or olive underparts. The female of the eastern Andean race coracina is brighter and greener above and below than nominate pipra, but the combination of a grey head and red eyes makes specific identication relatively easy for a female White-crowned Manakin of any race.

The White-collared Manakin feeds low in the trees on fruit and some insects, both plucked from the foliage in flight.