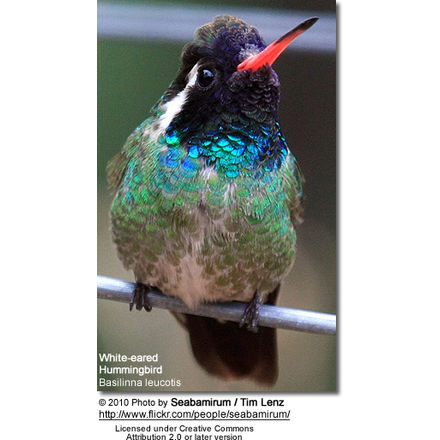 The White-eared Hummingbirds (Basilinna leucotis) is also known as zafiro oreja blanca (Spanish name – translated: sapphire white ear) – both of which refer to its most distinctive feature – the white line stretching from its eyes across its ears down to the chest. 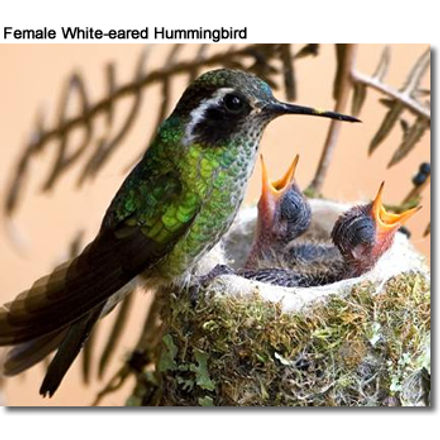 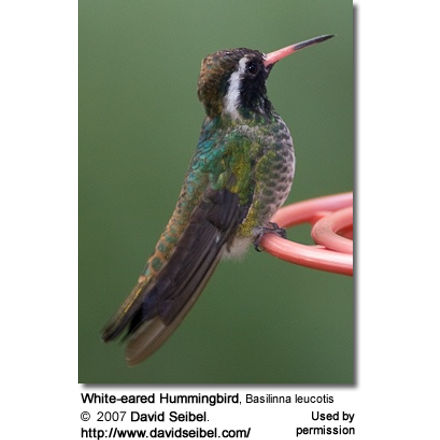 Migratory populations typically arrive at their breeding location in late March to late April and leave for their winter location by October to winter in Mexico.

White-eared Hummingbirds occurred as vagrants eastward to Mississippi and Michigan. They could conceivably have reached Massachusetts as well. 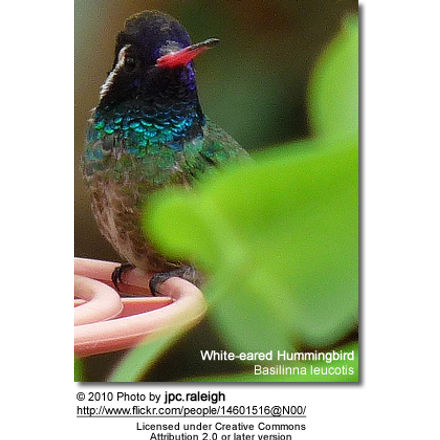 Common Physical Traits: The upper plumage and chest of the adult is mostly green. The undertail feathers are mostly white. The tail is dark and straight.

Their bills are long, thin, and straight, with red at the base. The most distinctive feature is their white ear stripe for which this species was named. It is more boldly colored in the male.

The adult male: His throat is a metallic turquoise green-blue. His crown and face is violet and black. His back is deep green with a rusty wash. Their slightly notched tail is bronze green – the outer feathers are darker. His lower abdomen and undertail feathers are whitish.

The bill of the male is short, straight and very slender. It is red in coloration with a fairly small black tip. A broad blue violet band encircles the base of bill in mature males.

The adult female is less colorful than the male. Her pale-cream colored throat has golden green to turquoise green speckles. Her back and crown (top of the head) are deep green. She has a broad white line behind the eye with a broad blackish stripe below. Her under plumage is buffy-white spotted with green. Her tail feathers (rectrices) look like the male’s, but the lateral ones are tipped with greyish-white.

Her bill is black with some red-orange at the base. Her tail is slightly notched and her outer tail feathers are tipped whitish.

Juveniles: Immature birds usually attain their adult plumage when they are 2 years old or older. Younger birds (juveniles) look similar to the female – both in coloring and size. However, the immature female shows distinct pale feathers edges and has a darker bill. The immature male has a distinct green patch on his throat and there is more red on his bill. 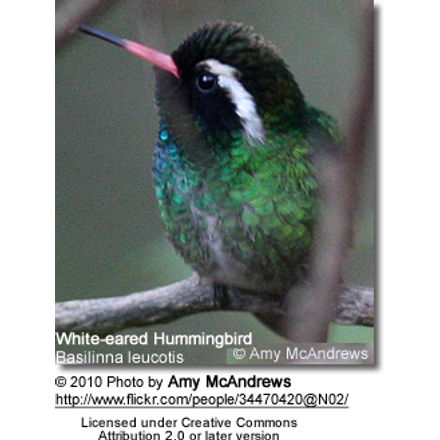 The average clutch consists of two white eggs, which she incubates alone for about 14 to 16 days, while the male defends his territory and the flowers he feeds on. The young are born blind, immobile and without any down.

As is the case with other hummingbird species, the chicks are brooded only the first week or two, and left alone even on cooler nights after about 12 days – probably due to the small nest size. The chicks leave the nest when they are about 23 – 26 days old. The female White-eared raises two broods each year.

The White-eared Hummingbirds primarily feed on nectar taken from a variety of brightly colored, scented small flowers of trees, herbs, shrubs and epiphytes. They favor flowers with the highest sugar content (often red-colored and tubular-shaped) and seek out, and aggressively protect, those areas containing flowers with high energy nectar. They use their long, extendible, straw-like tongues to retrieve the nectar while hovering with their tails cocked upward as they are licking at the nectar up to 13 times per second. Sometimes they may be seen hanging on the flower while feeding.