The White-faced Ibises (Plegadis chihi) are distinctive, dark-plumaged ibises that occur naturally in the Americas.

They resemble herons and share many of their habitats and behavioral traits, but unlike herons, ibises fly with necks outstretched and often in V-formation.

They breed in western USA south through Mexico, as well as from southeastern Brazil and southeastern Bolivia south to central Argentina, and along the coast of central Chile.

They winter in southern California and Louisiana south to South America (over the rest of their breeding range).

Breeding adults have a somewhat warmer plumage and they have pink faces bordered with white. The bill is grey bill and the legs are redder

White-faced Ibises can be identified by their red eyes throughout the year, compared to the Glossy Ibises‘ dark eyes. 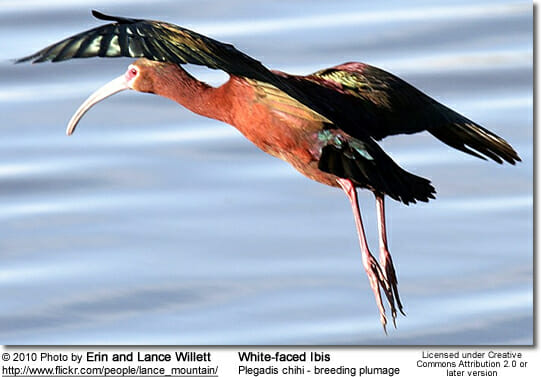 Glossy Ibises typically nest in colonies in marshes, often with other water birds.

The nests are shallow cup-shaped platforms of sticks, grasses or reeds that are typically situated on low trees or bushes near a body of water, such as rivers, swamps or lakes. Although some ibises also make their nest amongst rocks and on cliffs,

These ibises are generally quiet, but a variety of croaks and grunts -including a hoarse grrrr made when breeding – can be heard.

They mostly feed in shallow waters or marshy wetlands on small fish, aquatic insects, mollusks, frogs, and food sifted from the water surface. 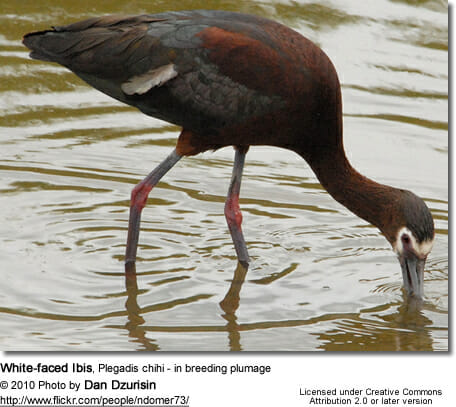