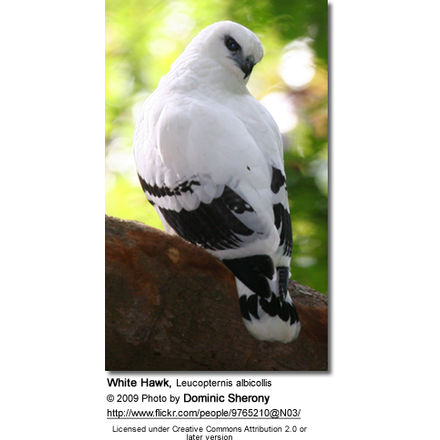 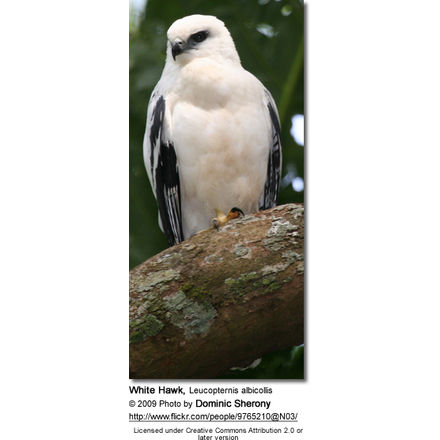 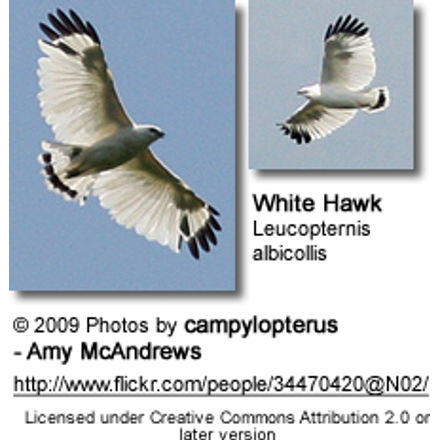 The White Hawk (Leucopternis albicollis), a bird of prey breeding in the tropical New World, belongs to the family Accipitridae of the Falconiformes; it is sometimes separated in the Accipitriformes with the other hawks and their relatives. Though it is commonly placed in the subfamily Buteoninae, the validity of this group is doubtful and currently under review.

This is a bird of lowland forest and other woodlands. It ranges from southern Mexico through Central and South America to Peru, Bolivia and Brazil. It also breeds on Trinidad.

The White Hawk’s range in central South America is the entire Amazon Basin, from the Andes on the west to the Guianas on the Atlantic on the northeast, and to the transition lands to the south.

A widespread species, it is usually not common, but the IUCN considers it not to be globally threatened due to the large extent of its range . 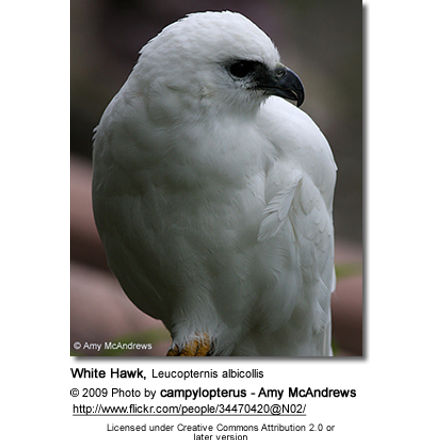 The adult White Hawk ranges from 46-56 cm long with very broad wings and has a white head, body and underwings. The upper wings are black, and the very short tail is black with a broad white band. The bill is black and the legs are yellow.

Males and females look alike, but females are larger and heavier (840 g compared to the male’s 650 g).

Immature birds have extensive black spotting on the upperparts and dark-streaked whitish underparts.

This species is often seen soaring, and has a spectacular aerial courtship display.

Entirely white, except for black markings on the outer primaries, and a black sub-terminal tail bar. The eyes are yellow.

Similar to ghiesbreghti but with more distinct black markings on the wings and tail. The eyes are brown.

Wing feathers are more heavily marked with black, and it has black streaks on the crown and collar. The tail band is broader and the eyes are brown.

Smaller than the northern forms and the wings are mostly black, with white markings. The black tail band extends to the base of the tail and the eyes are brown.

All subspecies look mainly white from below.

The identity of the birds discovered in 2000/2001 in the Serranía de las Quinchas of central Colombia  is unclear.

The call of the White Hawk is a plaintive kerwee.

The White Hawk feeds mainly on reptiles with some insects and mammals, caught in a sortie from a perch.

It builds a large stick platform nest in a tree and usually lays one dark-blotched blue-white egg. An attended nest was observed in Ecuador in mid-August.