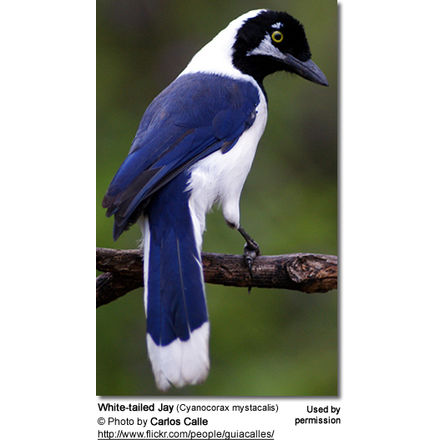 Within their limited range, they are the only naturally occurring jay species.

White-tailed Jays are Ecuadorian and Peruvian natives with a range that stretches in Ecuador from Guayas – a coastal province in central western Ecuador, the adjacent El Oro (the southernmost of Ecuador’s coastal provinces) and south – away from the coast – into the province of Loja.

In Peru, Ecuador’s neighbor to the south, their range extends down to western La Libertad located in northwestern Ecuador.

In Ecuador, they are most common in Guayaquil (the largest and the most populous city in Ecuador), in the Chongon Colonche Range (a mountain range on the central pacific coast), and along the first part of the highway west towards the coastal city of Salinas (located in the Province of Santa Elena, which previously was part of the Guayas Province).

They are generally absent from humid areas, favoring dry woodlands, desert-like scrub and cactus-dominated desert vegetation. These birds are found up to elevations of 4,000 feet (~ 1200 meters), but are most common below 1,640 feet (500 meters). 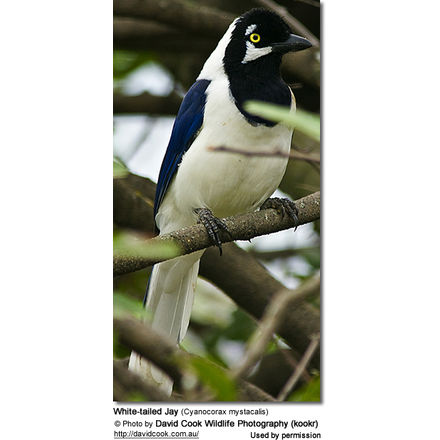 White-tailed Jays measure about 12.8 inches (32.5 cm) in length, including the tail.

The upper plumage is mostly dark blue, brighter on the wings. The head, sides of the neck, throat and chest are black.

There is a large, white area on the hindneck and upper back. The tail is mostly white except for the dark blue central tail feathers.

The face is black, except for the small white spot above the eye and the white, broad moustache, which arches up towards the eyes.

The plumage below is white.

Their eyes (irises) are pale yellow.

There are no birds within its range that it resembles. Confusion is unlikely.

They resemble the Cayenne Jays (not naturally found within their range), but those can be identified by their mostly violet-blue, white-tipped tails and their mantle brown glossed with violet, brightest on the wings. 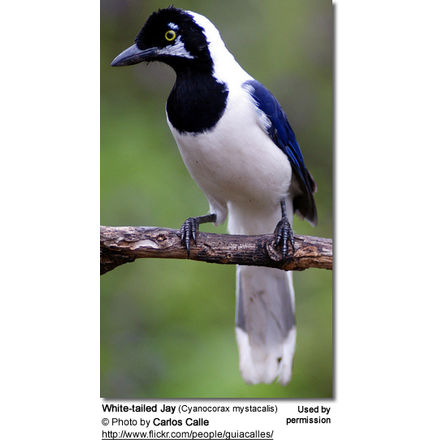 White-tailed Jays feed on a wide range of insects and other invertebrates, as well as on acorns and various cereal grains.

They will also take meat and human scraps, as opportunities arise. They mostly forage on the ground and in the open,

These birds are very vocal and their repetitive hollow calls are often heard within their range. Their vocalizations are described as fast repetitions: “cho-cho-cho” or “chah-cha-cha“.