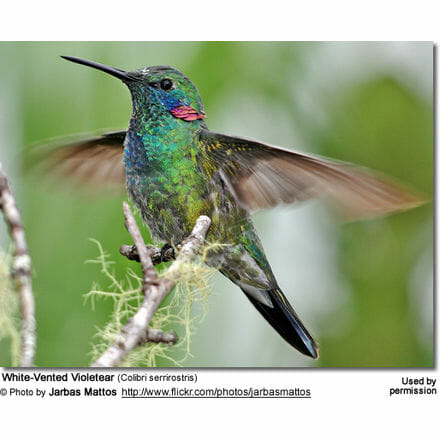 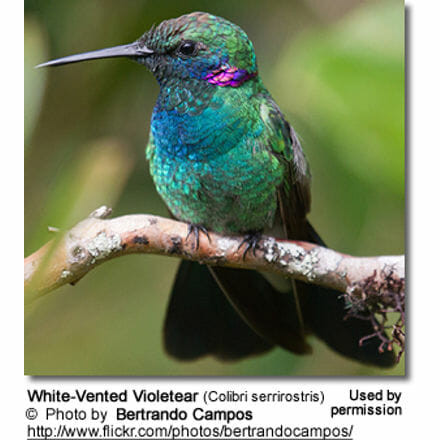 The White-Vented Violetears (Colibri serrirostris) are also known as Brazilian Violet-ears or Singing Hummingbirds – named for the fact that they are heard singing throughout the day.

Its scientific name is derived from the Spanish name for hummingbird “colibri” and “serri rostris” – translated “saw bill” – referring to the minute serrations on the upper bill. 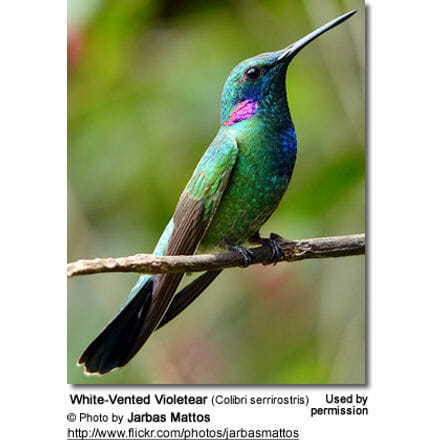 These South American hummingbirds are found in central and south Brazil (from Mato Grosso, Goiás, Bahia and Espírito Santo) west in Bolivia south to central Paraguay and northern Argentina south to Córdoba.

This species is common throughout its range.

The White-vented Violetear has a glossy green upper plumage and a yellow-green under plumage with blue shimmer. The vent is white.

There is aviolet-blue region from the eye down to and around the sides of the neck, often looking like a collar. The dark bill is long and slightly down curved. 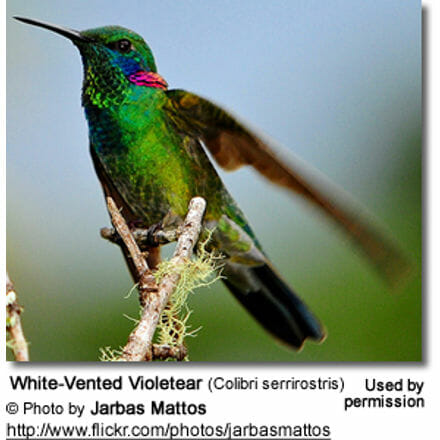 The female is responsible for building a small cup-shaped nest out of green moss and line it with other soft plant fibers, and strengthen the structure with spider webbing. The nest is typically found on a twig 1-3 m high in bush.

The White-vented Violetears primarily feed on nectar taken from a variety of brightly colored, scented small flowers of trees, herbs, shrubs and epiphytes. They favor flowers with the highest sugar content (often red-colored and tubular-shaped) and seek out, and aggressively protect, those areas containing flowers with high energy nectar.They use their long, extendible, straw-like tongues to retrieve the nectar while hovering with their tails cocked upward as they are licking at the nectar up to 13 times per second. Sometimes they may be seen hanging on the flower while feeding.

Its song consists of a vigorous repetition of the chit call usually song by several dozen breeding males in loose leks (= gathering of males for the purposes of competitive mating displays).