The male is called a “cob” – from Middle English cobbe (leader of a group); the female “pen,” and their chicks are known as “cygnets” – from the Latin word for swan, cygnus.

They migrate south to winter in west and central Europe – around the Black, Aral and Caspian Seas and coastal China and Japan.

In Great Britain, they breed in northern Scotland, particularly in Orkney. They overwinter in northern and eastern England as well as Ireland.

They usually migrate to their winter territories around October and arrive back in their breeding territory in April. 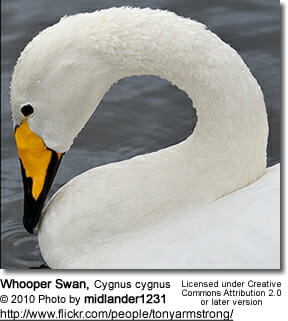 The Whopper’s Swan is native to the following countries:

It is a vagrant to:

During winter they can be found in inland lakes, estuaries, marshes, rivers and bays. When breeding, they occur around shallow lakes and coastal flats. 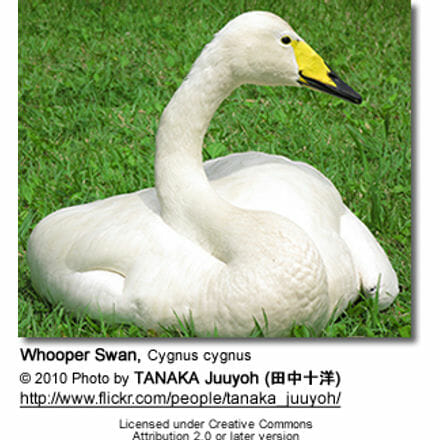 The Whooper Swan has a pure white plumage. The webbed feet and legs are black. Half of the beak is orangey-yellow (at the base), while the tip is black. These markings on the bill differ and individuals can be recognized by their bill pattern.

Juveniles usually have a white plumage, but grey-colored cygnets are not uncommon.

The Whooper Swan can easily be identified from other white swans by the color of the beak. 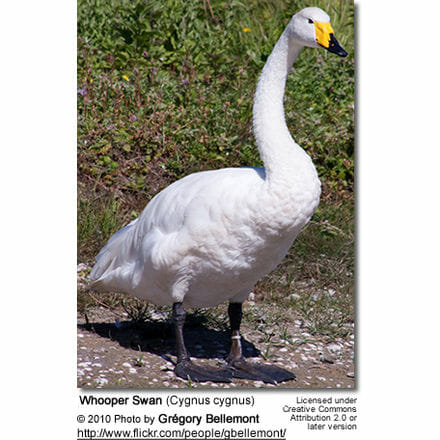 The Whooper’s Swans breed in freshwater marshes, ponds, lakes and along slow-flowing rivers.

Most Swans find their mates before the age of 2 years – usually during the winter season. Even though some may nest for the first time when they are two years old, most won’t start until they are 3 to 7 years old.

Swan pairs typically bond for life and pairs stay together throughout the year, including moving together in migratory populations. However, it has been observed that some of them switch mates over their lifetimes, particularly after nesting failures, and some that lost their mate did not mate again.

In captivity, Whooper Swans have been reported to hybridize with Mute Swans, Trumpeter Swans, Tundra Swans and Greylag Geese.

They will nest in areas with ample food supply, shallow and uncontaminated water, and few disturbances. Usually, only one pair nests on a single body of water.

These nesting territories range from 6 to 150 acres in size and are often located near where the female was hatched. The female chooses the nesting area, while the male defends it. Swan pairs are most likely to return to the same nesting site if they were able to raise young successfully there in the past.

Nest sites are often situated on slightly elevated sites surrounded by water, such as on top of old beaver houses, dams or muskrat mounds; on emergent vegetation that is either floating or anchored to the bottom of the water; or on small islands. Pairs will either build a new nest or repair the nest that they have used in previous years.

Nest construction commences in mid-April and it may take up to two weeks for it to be completed. The male collects aquatic vegetation, grasses and sedges, and transfers them to the female.

She will first pile the plant material up high and then uses her body to form a depression to lay her eggs in. The nest is basically large open bowl. The inside of the nest s lined with down, feathers and soft plant matter found in her environment.

The nests may reach a diameter of up to 11.5 feet (1 to 3.5 meter) and is often surrounded by a 20 to 30 foot (6 to 9  meter) ditch. This ditch is usually filled with water to make it more difficult for mammalian predators to reach the nest.

Egg laying typically takes place from late April to June, sometimes even before the nest is completed. The female lays an egg every other day until the clutch is completed. There are usually 5 – 6 creamy white eggs in a clutch.

During the incubation period, the female leaves the nest only for short periods to feed on nearby vegetation, to bathe or preen her feathers. However, before leaving the nest, she will cover the eggs with nesting material to conceal them. The male will also remain nearby to protect the nest.

The adults have been observed performing a “victory display” after intruders are deterred, which is similar to their courtship display and consists of facing each another while quivering their wings and trumpeting loudly.

The pair may lay a second clutch if the first eggs or cygnets are lost. 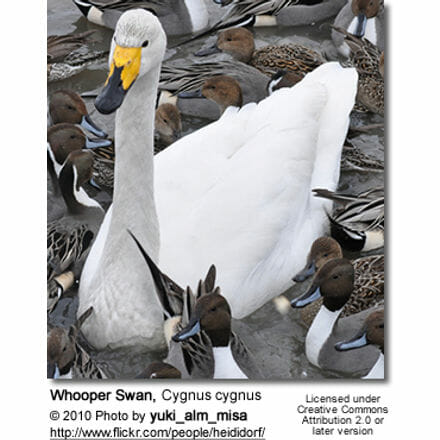 Swans feed primarily on aquatic plants; but they also eat grain, grasses and crop foods, such as wheat, potatoes and carrots – especially in the winter when other food sources aren’t readily available.

In shallow water, Swans may use their strong webbed feet to dig into submerged mud and, like mallards, they tip up – plunging the head and neck underwater – to expose and feed on roots, shoots and tubers. The cygnets feed on invertebrates and aquatic vegetation stirred up by their foraging parents. Ducks and other water birds also often follow swans to forage on exposed plant matter and aquatic insects.

Swans also forage by swimming picking up plant material from the water’s surface or water’s edge.

On land, they feed on grains and grasses. Since the mid 1900’s, its foraging behavior during the winter has changed to include more ground feeding

Their calls consist of a loud, deep, sonorous, trumpet-like honking sounds. Their vocalizations also include peeps, hisses and gurgles.

Their loud calls carry for a great distance.

Swans are known to live 20 to 30 years. Swans form pair bonds when they are two to four years old and remain bonded for life. The first nesting usually occurs when they are 4 or 5 years old.