Wild turkeys are different than the domesticated white turkeys that are bred for food in the USA and in other parts of the world.

Wild Turkeys are smaller than domesticated turkeys and far more colorful in appearance. 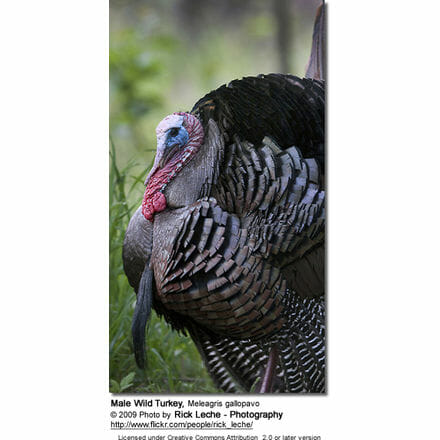 Introduction to the Wild Turkey

Wild turkeys are resident in much of eastern North America, from extreme southern Canada southward to Mexico and Florida. They are scattered locally in the western states and have been introduced into many western states, and Hawaii, Europe, and New Zealand.

Male turkeys gobble, strut and spit and boom to attract females. During the strut the tail is fanned out and held up vertically, the wings are lowered so that the wingtips drag on the ground, and the feathers on the back and chest are fluffed out, with the head held back.

It may occasional perform a deep “chump” (spit) sound, followed by a low “humm” (boom)  accompanied by a rapid vibration of the tail feathers.

During the strut the facial skin engorges and the red, white and blue colors intensify, especially the white are of the forehead.

The nest is a depression in dead leaves or vegetation on ground that may contain from 4 to 17 tan or buffy white, evenly marked eggs with tiny reddish spots. The chicks hatch after an incubation period of 26 to 28 days. They are downy and able to follow the hen within minutes of hatching.

Populations dropped drastically in 19th and early 20th century because of hunting and habitat loss. Northeastern populations were eradicated.

Stocking programs successfully reintroduced turkeys to most of eastern range, and to areas outside the ancestral range in West. Populations continue to increase.

The Eastern Turkey (M. g. silvestris) is the most widely distributed subspecies of the wild turkey. It occurs east of the Missouri River to the Atlantic ocean, the southern and western parts of Minnesota, the eastern third of Kansas and Oklahoma, and eastern Texas and northern Florida.

The Merriam’s (M. g. merriami) subspecies occurs in South Dakota, and portions of most of the mountain states from Canada to Mexico.

The Gould’s Turkey (M.g. mexicana) occurs in extreme southwest New Mexico, southeast Arizona and adjacent regions of Mexico. It is listed on the endangered species list; hunting it is prohibited in the United States.

Turkeys prefer to roost in trees larger than the surrounding vegetation and will often choose roost sites on east facing slopes out of the prevailing winds.

Because sight is one of the turkeys’ means of defense against predators, they often use open fields and meadows as feeding and strutting sites, and wooded areas as roosting sites. Strutting sites are often traditional, used year after year by successive birds.

Turkeys eat a wide range of foods including succulent grasses and forbes, insects, leftover grains, fruits of the grape, cherry and black gum, seeds including mast crops of acorns, pine nuts and juniper (cedar) berries, and new growth agricultural crops. In the winter turkeys rely heavily on acorns and seeds; branch tips of brush and trees; leftover grain crops; and will feed heavily in fields where manure has been spread; at corn cribs and feedlots; and at silage piles.

In the early spring turkeys often rely on leftover grain in agricultural fields. Once the weather warms and new green growth appears they will begin feeding in pastures, river and creek bottoms, and hayfields, where they eat green forage and search for insects.

Hens often seek out sources of calcium (such as land snails) for egg production in the spring.

The availability and location of turkey roosting sites is a determining factor in turkey use of the habitat. If few or no roosting sites are available turkeys may leave the area or not use it. They prefer to roost in heavy timber in ravines if possible; where they can be out of strong prevailing winds in winter, but they will roost in trees open to the wind. Roost sites are often located over or near water in the south.

Scientific studies have shown that turkeys often roost on an east or south-facing slope, about a third of the way down the slope where the winds are calm. East and south facing slopes also receive the earliest sunlight, allowing the birds to warm-up and be able to see early in the morning.

In one study roost sites were often within one half mile of water, and five hundred yards of a meadow. This could be attributed to the fact that turkeys often feed before going to roost in the evening, and they don’t travel far at dusk.

The preferred roosts in the study were mature trees with open crowns giving the turkeys room to fly into the trees and move around. They also preferred trees with large horizontal limbs to roost on.

Mature toms often choose pines (where they are available) because the pines can reduce wind speeds by 50-70 percent. Eastern turkeys generally have several roost sites in their home range, and they may use different sites on successive nights.

In limited and poor habitat, Merriam’s turkeys often roost in the same trees on a regular basis.

Vision scientist Dr. Jay Neitz believes that most birds see in trichromatic color like humans, and that some birds see ultraviolet light as different than any of the three primary colors of red, yellow and blue seen by humans.

Because turkeys are a prey species their eyes are located on the sides of the head, giving them a wide field of vision.

But, because of their wide spaced eyes, they sacrifice depth perception; they see very little in front of them with both eyes at the same time. As turkeys walk, their heads move back and forth, giving them two different angles of an object, which helps them determine the distance to the object.

As a result of their poor depth perception turkeys have difficulty determining the relative size of objects.

The ears of most birds, including turkeys, are located on the sides of their heads, and because they have no outer ear with a cup to enhance the sound from one direction, they hear sounds all the way around them.

Sound received by one ear but not by the other ear helps the birds determine which direction the sounds come from, but not the distance of the sound. Loud sounds generally come from closer range than quieter sounds, and cause turkeys to become alert.

This explains why prey species with widely spaced eyes and ears, like turkeys, often try to verify the danger with both their eyes and ears, and then give an alarm signal before fleeing.

If they don’t know which direction the danger came from they need to verify the danger, and its direction, before they flee; or they may actually flee into, rather than away from, the danger.

Mammalian prey species (deer, elk, sheep, etc.) that have a highly developed sense of smell can determine the direction of danger by scent and wind direction.

They generally flee downwind or crosswind from danger, knowing they are fleeing away from danger, not toward it.

Because most birds have a poor sense of smell they need to rely heavily on both their eyes and their ears to determine the direction of danger before they flee from it.

Turkeys leave a variety of signs as indication of their presence. Adult turkey tracks range from 2-3 inches in length, hens up to 2 1/8 inches and toms up to 2 1/4 inches and longer.

Mature toms leave a wider and deeper middle toe imprint than hens, often with the scales of the toes showing in the track.

Turkey droppings can be found under roost trees, in feeding areas and along travel routes. Hen droppings are pencil size or larger and are bulbous or spiral in shape; tom droppings are straight or “J”shaped.

Piles of droppings under large trees indicate roost sites. Dropped feathers, wing scrape marks in strutting areas and the shallow depressions of turkey dusting bowls are all evidence of turkeys use. V shaped scratches in dirt or leaf-litter are evidence that turkeys have been feeding in the area.

Turkeys habitually occur in flocks. The hens and the young poults often stay together throughout the summer in family groups, or in flocks of several families, with an older hen as the dominant bird of each family, and possibly of each group.

Young females often stay with their mother through the winter and may join other “female” family groups until spring.

In the fall the young males or “jakes” form their own flocks and stay together through the winter. These groups of jakes may join adult males in the spring; during the breeding season.

Adult male flocks often form in the summer after the breeding season is over. These male groups often remain together until spring, when some of the toms go off by themselves.

Since dominance is established within each family as the young birds grow, and the male siblings of each family often stay together into adulthood, the dominant male of each group is often the sibling of the other males in the group.