The different Wood Dove species – bird genus Turtur – are spread across Africa, mostly remaining south of the Sahara Desert. They are resident (non-migratory).

The habitat requirements differ somewhat by species. Some prefer forests, and others are found in semi-open or open areas. Many have adapted well to living in urban environments.

These doves are usually seen alone or in pairs, but may form large flocks at waterholes or at favored feeding areas. 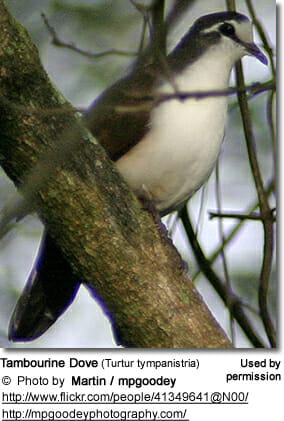 Their bills range in color from reddish or purplish to black.

They have fairly short wings and tails, rufous wings with glossy patches, and broad black and white bands on the lower back.

Flight: Their flight is quick and characterized by regular beats and occasional sharp flicks of the wings; and they generally fly low. In flight, the chestnut markings in the underwings are visible.

Gender ID: Males and females look alike (the exception being the Tambourine Dove).

Juveniles are duller than adults. They arescaly below and lack the wing spots. 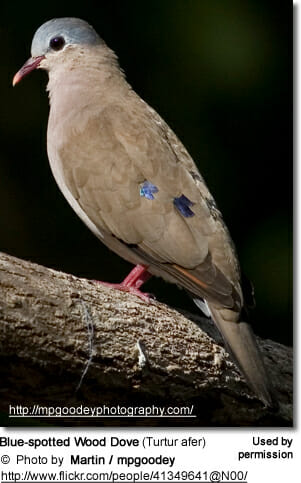 Ssp. chalcospilos, afer and abyssinicus look alike except for some differences in the color of the plumage (mostly the wing patch), and the color of the beak. The ranges of the species also facilitate ID; however, their territories overlap substantially.

Pairs are monogamous, establishing firm bonds that last a lifetime. They build nests out of twigs, leaves and other plant matter in trees (often acacias) or bushes. The average clutch consists of two cream-colored eggs. The male and female raise the young jointly to independence.

Wood Doves feed on various seeds, fallen fruits and insects. Most foraging occurs on the ground.

The vocalizations of the different Wood Doves are quite similar. They are described as soft long coo-coos, followed by a series of slow descending coos lasting about 10 seconds, and ending with 4 seconds of rapid coos that decrease in volume.