In the summer of 2010, I adopted a very ill cockatiel from an avian shelter. The bird had multiple health issues and was near death.

After months of intense nursing, which included medications prescribed by my avian veterinarian, Dr. Robert Dahlhausen, most of the bird’s illnesses were resolved.

The xanthomas, however, would prove to be more challenging. 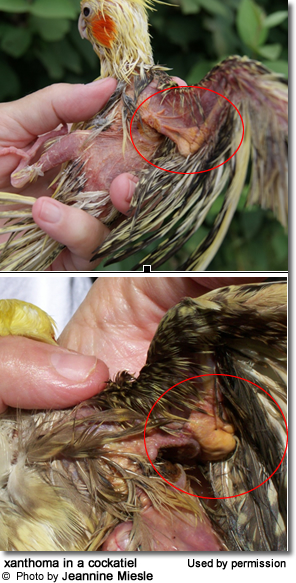 In this cockatiel, the xanthomatous tissue had invaded several areas on her neck, breast, sides near the wings, and upper back. They extended from the body, across the humerus bone, to the elbow joints and up the ulnar bones toward the manus (hand). The masses on the wings near the body had spread enough to restrict wing function. The xanthomatous tissue on her sides was an extension of those which covered her patagial (wing web) areas. These xanthomas covered most of the wing web and elbow joints, both ventrally and dorsally.

Figure 2: The left underwing xanthomas. Note the necrotic lesions under the wing and xanthomatous tissue on her axial areas (sides). The xanthomas are visible as they grow through the feathers.

Marcie’s condition was critical. Dr. Dahlhausen administered and prescribed multiple medications for her concurrent diseases and provided Gentamicin Sulfate antibiotic cream for the necrotic sores and dermal infection under her wings. I was to massage the cream into the wounds several times a day. Since the masses were interwoven with the damaged tissues, all of the affected tissues received massage at each session.

Treatment of the xanthomas

I rejected all three of these options, resolving to devise a method of eliminating these masses by non-surgical means since she could not have survived surgery. Even if she could have survived it, I refused to subject her to it. According to Dr. Dahlhausen, since xanthomas are composed of lipids and cholesterol, the fats would be reabsorbed into the body and eliminated, but the cholesterol would not. The yellow masses would shrink a little as the fat dissolved, but the cholesterol–filled cells would always be with her, enlarging and spreading.

I reasoned, therefore, that the xanthomas should respond to therapeutic, restorative massage. The cells would undergo lysis (cellular breakdown) if exposed to pressure and manipulation. The friction and resultant heat created by massage would become the lysins that would destroy the fat and cholesterol cells’ membranes and thus destroy the tissue. The blood would absorb the cholesterol, and the body would then excrete it as it does the lipids, through the intestinal tract. It was plausible, therefore, that the xanthomas would reduce in size and eventually disappear. I began to massage the xanthomas at the same time as I worked on the sores.

During the next few weeks, the wounds began to heal, but the xanthomas were unyielding. At her visit in late August, Dr. Dahlhausen did notice a slight decrease in the size of the xanthomas under her wings but not on her elbow joints, neck and back. I was taken aback by an unusual occurrence: The yellow masses seemed to decrease in one area and increase in another, as though the cells had moved. At this time, it defied explanation.

Figure 4: Aug. 20, 2010–Marcie’s left underwing, showing the growth pattern of the xanthomas; they are attached to the muscles, tendons and bones and are inhibiting her wing movement.

Figure 5: Sept 15, 2010—By September, we were beginning to notice some improvement in the lesions under her wings and a reduction in the size of some of the xanthomas. The xanthomas wrapping around the elbow joints are visible.

Figure 6: Nov 16, 2010—The left underwing; note the reduced size of the xanthoma at the elbow joint.

My massage technique is as follows:

The body is extremely stressed in its attempts to heal concurrent illnesses. The life-threatening, internal diseases and external wounds are dealt with first, and the rest wait. Therefore, it took weeks for the xanthomas to respond to treatment. Since her body was also immune-compromised and suffering from poor nutrition, results took even longer.

Figure 7: Nov. 16, 2010—The xanthomas stretching across the bones and muscles of the right wing are shrinking, and the wing is able to extend more fully. There is a clustering of xanthomatous tissue developing above and to the right of the elbow joint.

By December, we noticed the following changes in the nature of the xanthomas:

By January of 2011, the xanthomas were showing visible improvement. They had been steadily shrinking due to the daily massage. The appearance of the knot-like protrusion seen in Figures 13 had yet to be explained. The previously large, spreading xanthomatous mass appeared to be condensing and accumulating in that one area near her body. This tissue concentration would be clarified later in her recovery as it tied into the final dissolution and excretion of the xanthomatous cells.

Figure 9: Dec. 5, 2010—Feathers are trying to break through the xanthomas on her elbow joints.

Figure 10: Dec. 20, 1020–The right wing, showing xanthomatous tissue in the wing web. She is unable to achieve full wing extension due to the xanthoma from her elbow attaching to her side.

Figure 11: Dec. 26, 2010—Marcie’s left underwing xanthomas are shrinking; the ulna still harbors some xanthomatous tissue. There is one small cluster above and to the left of the elbow.

Figure 14: January, 2011—On the dorsal, left wing elbow joint, the xanthoma has shrunk and now only covers the lower half of the joint. It is the lower, yellowish, dimpled part, where the feather is coming through. The pink area above it is bone and skin tissue. Any feathers that attempted to emerge there eventually fell out as the xanthoma reduced in size.

Figure 15: March 14, 2011: Marcie’s right underwing showing dark feathers emerging from the xanthoma on the elbow joint. This complex xanthoma is wrapping around the bone and interconnecting musclse and tendons. A knot-like cluster of xanthomatous matter is visible above the black feathers, attaching to her body. It is inhibiting wing movement.

Figure 16: March 14, 2011–The left underwing skin is showing rapid regeneration as the xanthoma gives way to healthy tissue on the patagium and over the bones. There are visible cracks in the wing web (above the ulnar bone) that would take time to heal.

In April, a clear, yellowish, heavy fluid had begun seeping through the skin under her right wing and side. I believed that this sticky fluid must be cholesterol, and it was undergoing lysis, breaking down and converting to a liquid. Only the right underwing and the skin around her neck now bore the xanthomatous tissue. These areas might have been the source of this viscous substance, but it was oozing out from the inside of the body through the skin instead of being absorbed into the body and excreted through the intestinal system as the lipids had. In addition, the tissue under that exudate on the wing was not healing.

Dr. Dahlhausen had originally projected that this condition would have run its course in a few weeks. He agreed that it was most probably the cholesterol undergoing lysis, and that the massaging had broken down the molecules of cholesterol so that the body could eliminate them.

I presumed that it was possible for the cholesterol to break down within the dermal layers and escape from the body through the patagium, but we could not explain this phenomenon. Dr. Dahlhausen ran a cytology test on the right underwing tissue from several locations. There were no fungal cells, so the sticky exudate could only be coming from the cellular lysis in the xanthomatous tissues.

He suggested I try giving her the herbal remedy, ginseng, which is purported to break down and eliminate cholesterol in the body. Sometime later, he proffered a possible explanation:

“Since it is only the right wing, it points to problems in the aortic arch and cardiac outflow from the heart. The great vessels of the heart are the site that is often thickened with cholesterol deposits, which impede blood flow.” (R. Dahlhausen)

If indeed the ginseng were to work, it could take months, since the natural remedies do not show results quickly; but, in the long run, they are often the most effective when medications fail. I began to put a few drops of the dark liquid in with her Emeraid.

Initially, my goal was to stop the leakage, but then I realized that the body had a purpose in releasing it. I came to the following conclusions:

After two weeks of monitoring the discharge of the cholesterol, I observed the size of the xanthomas gradually decrease. If indeed the ginseng had worked to assist in eliminating the cholesterol from her aortic arch, was her body now completely free of cholesterol? How could we tell if it were?

Figure 17, 18: Dec. 2011: All of the xanthomatous tissue is gone from Marcie’s wings and sides. The tissue has healed and feathers are growing in.

After several weeks on the ginseng, the excretion ceased, and the xanthomatous matter had completely disappeared. I believe now that my theories were correct:

Figure 19 and 20: December, 2011: The Xanthomas on Marcie’s elbow joints are gone, and the covert feathers are growing in over the joints.

I believe that the removal of xanthomas can be accomplished on any bird, regardless of the extent of the xanthomatosis. I am unsure about whether I would have achieved the same results had I used a different antibiotic cream or a non-antibiotic cream. In this case, however, the antibiotic cream was necessary because of the extant dermatological infections and open wounds. It took six months for the xanthomas on her wings and elbows to resolve, and another six months to eliminate them from the skin around her neck, upper back and throat areas since I was unable to manipulate that tissue. But it was more than worth the time spent in order to avoid surgery on her. Time, commitment, and patience.

The reader will find the complete article on Marcie’s rescue and recovery at this website: www.beautyofbirds.com/marcie.html.