The Yellow Bittern (Ixobrychus sinensis) is of Old World origins, breeding in tropical Asia from India and Sri Lanka east to Japan and Indonesia. It is mainly resident, but some northern birds migrate short distances.

They can be difficult to see, given their skulking lifestyle and reedbed habitat, but tend to fly fairly frequently, when the striking contrast between the black flight feathers and the other wise yellowish plumage makes them unmistakable.

This small bittern averages 38cm in length, with a short neck and longish bill.

The male is uniformly dull yellow above and buff below. The head and neck are chestnut, with a black crown.

The female’s crown, neck and breast are streaked brown.

The juvenile is like the female but heavily streaked brown below, and mottled with buff above. 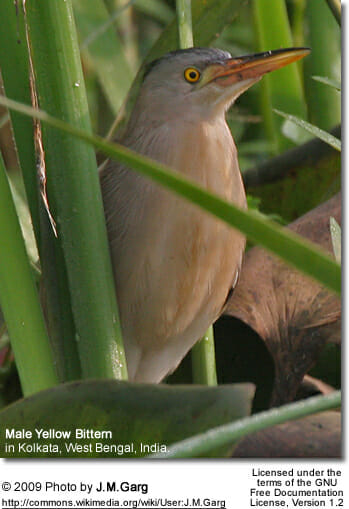 Their breeding habitat is reedbeds. They nest on platforms of reeds in shrubs. 4-6 eggs are laid.

The Yellow Bittern (Ixobrychus sinensis) is protected under the Migratory Bird Treaty Act of 1918.