The Double Yellow Head or Yellow-headed Amazon (Amazona oratrix aka Amazona ochrocephala oratrix) is probably the best known of all the Amazon Parrots.

Differentiating it from other related amazon parrots, this amazon possesses both the yellow nape and yellow crown – hence a “double-yellow” head and the origin of its name. 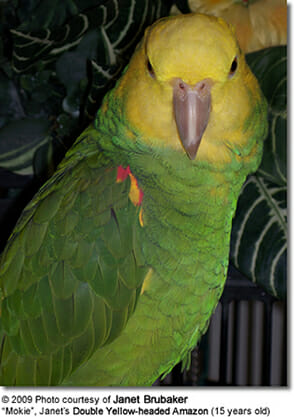 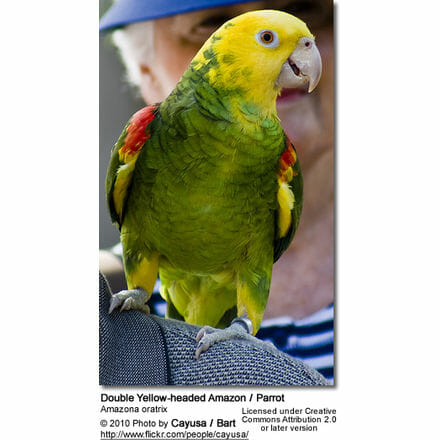 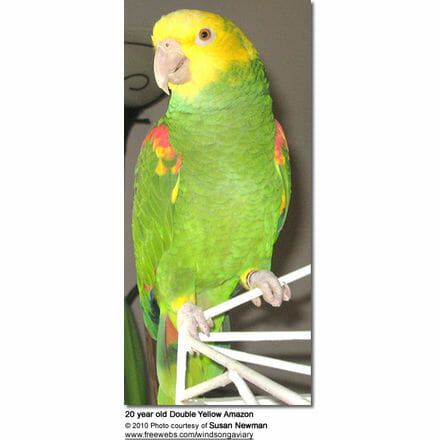 The Yellow-headed Amazons are endemic to Guatemala. They were previously also found along the coastal slopes of Mexico from the Tres Marías Islands and Jalisco to Oaxaca and from Nuevo León to northern Chiapas and southwestern Tabasco, as well as a disjunct area including most of Belize, as well as northwestern Honduras. They inhabit riparian forest and areas with scattered trees, as well as evergreen forest in Belize and mangroves in Guatemala. Introduced populations can be found in Stuttgart, Germany where a population of over 50 individuals resides. Smaller introduced populations are to found at Imperial Beach, San Diego and Santa Anna both in Southern California.

The Yellow-naped Amazon averages 15 – 17 inches (38–43 cm) in length (including tail). When excited all feathers of the neck and crown are raised, making the head appear double in size. They have a robust build, rounded wings, and a square tail. The body is bright green, with yellow on the head, dark scallops on the neck, red at the bend of the wing, and yellow thighs.

The flight feathers are blackish to bluish violet with a red patch on the outer secondaries (shorter, upper “arm” feathers). The base of the tail also has a red patch, which is usually hidden. The outer tail feathers have yellowish tips. The bill is horn-colored, darker in immatures of the Belizean and Honduran subspecies. The eye ring is whitish in Mexican birds and grayish in others. Male and female look alike.

Mutations: Lutino and blue mutations and myriad variations have been produced in aviculture. Below is a photo of Tommy – a beautiful and rare mutation double headed amazon. According to his owners, he is a great pet. He likes attention and wants to be close to the action. He can be very vocal screaming “come here, come here!” Like just about all parrots, he likes to discipline by biting from time to time. Training is recommended to prevent undesirable behavior. 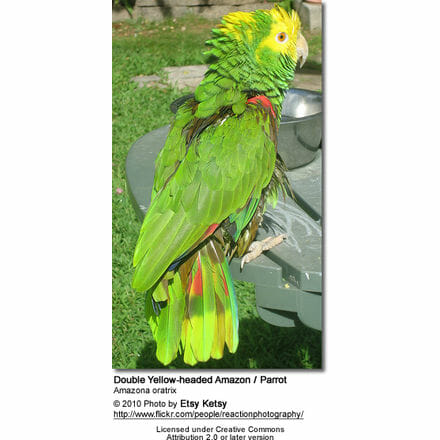 Some become nippy and they may not be the right pet for the casual owner who doesn’t want to take the time to learn about parrot behavior and training. They are generally known to be noisy, thus they may not be suitable for individuals who are intolerant to noise. As is the case with most mid-size to large parrot, they can be destructive unless their energy is redirected at chewing toys, natural and non-toxic branches, and training of tricks.

If you are considering one of these magnificent parrots as pets, please visit the following websites for information: