The Yellow-rumped Cacique, Cacicus cela, is a passerine bird in the New World family Icteridae. It breeds in much of northern South America from Panama and Trinidad south to Peru, Bolivia and central Brazil.

There are three subspecies 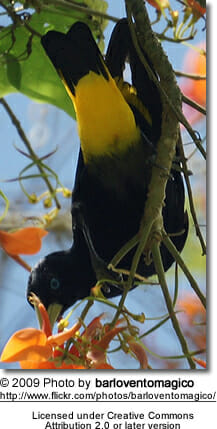 The latter two may be a separate species, Saffron-rumped Cacique.

The Yellow-rumped Cacique is a bird associated with open woodland or cultivation with large trees.

Yellow-rumped Cacique has benefited from the more open habitat created by forest clearance and ranching.

It is a colonial breeder, with up to 100 bag-shaped nests in a tree, which usually also contains an active wasp nest.

The females build the nests, incubate, and care for the young. Each nest is 30–45 cm long and widens at the base, and is suspended from the end of a branch. Females compete for the best sites near the protection of the wasp nest.

The normal clutch is two dark-blotched pale blue or white eggs. Females begin incubating after laying the second egg; hatching occurs after 13 or 14 days. The young fledge in 34 to 40 days, usually only one per nest.

The male is 28 cm long and weighs about 104 g, and the female is 23 cm long and weighs 60 g. This is a slim bird, with a long tail, blue eyes, and a pale yellow pointed bill. It has mainly black plumage, apart from a bright yellow rump, tail base, lower belly and wing “epaulets” (= patches).

The female is smaller and duller black than the male, and the juvenile bird resembles the female, but has dark eyes and a brown bill base. 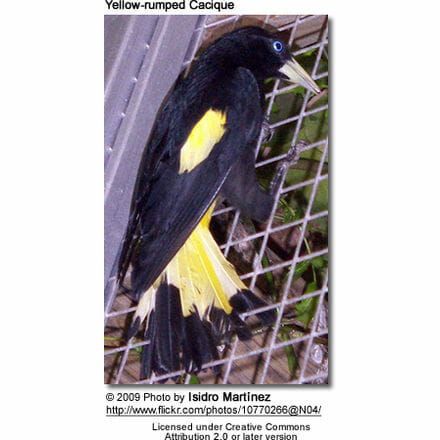 The song of the male Yellow-rumped Cacique is a brilliant mixture of fluting notes with cackles, wheezes and sometimes mimicry. There are also many varied calls, and an active colony can be heard from a considerable distance.

The Yellow-rumped Cacique has benefited from the more open habitat created by forest clearance and ranching. It is not considered threatened by the IUCN.

In Peruvian folklore, this species – like other caciques and oropendolas – is called paucar, or – referring to this species only – paucarcillo (“little paucar“). This species is apparently the paucar that, according to a folktale of Moyobamba, originated as a rumor-mongering boy who always wore black pants and a yellow jacket. When he spread an accusation against an old woman who was a fairy in disguise, she turned him into a noisy, wandering bird. The bird’s appearance is thought to augur good news.