The Yellow-tailed Oriole, Icterus mesomelas, is a passerine bird in the New World family Icteridae.

It breeds from southern Mexico to western Peru and northwestern Venezuela; in Peru it also lives in a river valley corridor.

The Yellow-tailed Oriole is fairly common except in Peru and Venezuela, but is reducing in numbers in parts of its range because of persecution by the cage-bird trade; this species is valued for both its appearance and its beautiful song.

The Yellow-tailed Oriole is 22-23 cm long and weighs 70 g. It is mainly yellow with a black back, lower face and upper breast. The wings are black with a yellow patch (epaulet) and the tail is black with yellow sides.

This is the only oriole with yellow in the tail, hence the species’ name.

Males and females look alike, but young birds have the black on the back and tail replaced with olive-green. 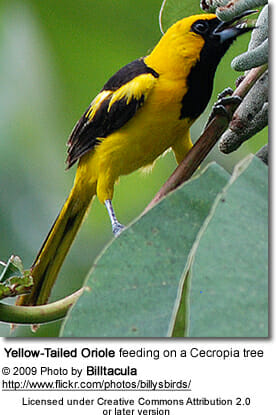 There are four subspecies.

The calls of this species include a chick and a weechaw. The song is a melodic repetition of rich whistles, chuck, chuck-yeeaow. It is often given as a duet, with the female’s response following or overlapping the male’s longer phrases. 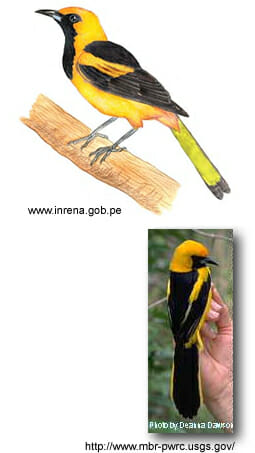 The birds forage in pairs or small groups in denser vegetations than most orioles, mainly feeding on insects, although they will also take nectar and certain fruits such as Gumbo-limbo (Bursera simaruba)[1].

It builds a deep but thin cup nest 2 m high in a thorny scrub by a stream. It lays three dark-blotched white eggs, which hatch in 13 days with a further 14 days to fledging.