The Zebra Dove (Geopelia striata), also known as Barred Ground Dove, is a bird of the dove family Columbidae, native to South-east Asia.

It is closely related to the Peaceful Dove of Australia and New Guinea and the Barred Dove of eastern Indonesia. These two were classified as subspecies of the Zebra Dove until recently and the names Peaceful Dove and Barred Dove were often applied to the whole species

The native range of the species extends from Southern Thailand, Tenasserim and Peninsular Malaysia to the Indonesian islands of Sumatra, Java, Bali and Lombok. It may also be native in the Philippines.

The Zebra Dove is popular in captivity and many populations have appeared outside its native range due to birds escaping or being deliberately released. It can now be found in central Thailand, Laos, Borneo, Sulawesi, Hawaii (introduced in 1922), Tahiti (1950), New Caledonia, the Seychelles, the Chagos Archipelago (1960), Mauritius (before 1768), Réunion and Saint Helena.

It inhabits scrub, farmland and open country in lowland areas and is commonly seen in parks and gardens. 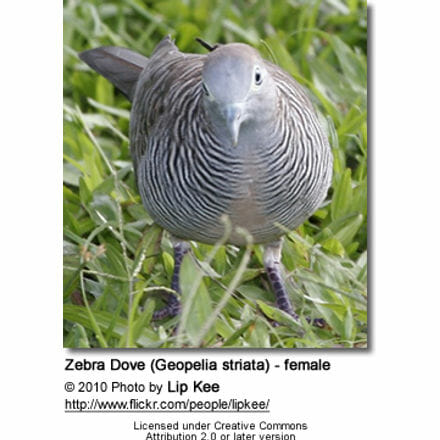 Trapping for the cagebird industry has led to them becoming rare in parts of Indonesia but in most parts of its range it is common.

Zebra Doves are among the most abundant birds in some places such as Hawaii and the Seychelles. 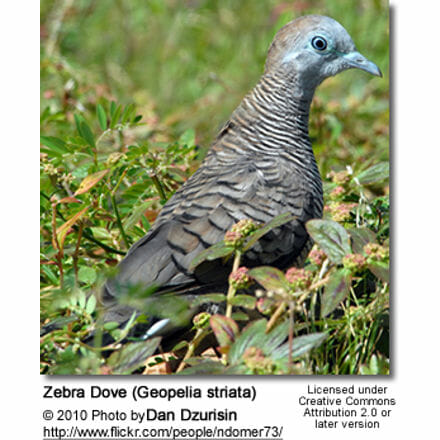 The birds are small and slender with a long, narrow tail. The upperparts are brownish-grey with black-and-white barring. The underparts are pinkish with black bars on the sides of the neck, breast and belly.

The face is blue-grey with bare blue skin around the eyes. There are white tips to the tail feathers. Juveniles are duller and paler than the adults. Zebra Doves are 20-23 centimetres in length with a wingspan of 24-26 cm.

Their call is a series of soft, staccato cooing notes. In Thailand and Indonesia, the birds are popular as pets because of their calls and cooing competitions are held to find the bird with the best voice.

The Zebra Dove feeds on small grass and weed seeds. They will also eat insects and other small invertebrates. They prefer to forage on bare ground, short grass or on roads, scurrying about with rodent-like movement. Unlike other doves, they forage alone, or in pairs. Their coloration camouflages them wonderfully against the ground.

In Hawaii and the Seychelles they come to hotels, restaurants, and even people’s houses to feed on crumbs and pieces of bread around outdoor tables. 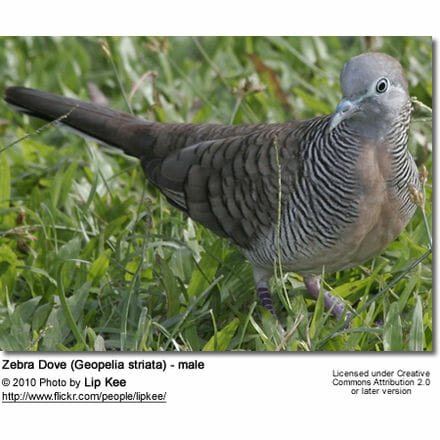 In its native range the breeding season is from September to June. The males perform a courtship display where they bow while raising and spreading the tail.

The nest is a simple platform of leaves and grass blades. It is built in a bush or tree or sometimes on the ground.

One or two white eggs are laid and are incubated by both parents for 13 to 18 days.

The young leave the nest within two weeks and can fly well after three weeks. 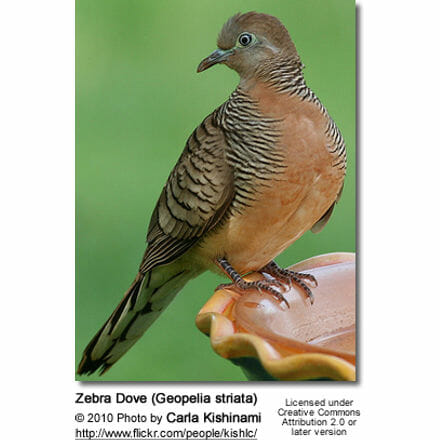