This species was named for its striking blue head on an otherwise mostly green body.

Until recently, these parrots were considered quite common in the wild; however, they are now considered endangered with a declining population in the wild that is estimated between 1,000 – 2,500 birds by BirdLife International and 9,200 up to as many as 46.000 mature individuals by Tobias and Brightsmith (2007).

The existence of these parrots is threatened by habitat destruction and capturing for the rare bird trade. Unfortunately, these parrots are a valuable commodity for which collectors pay thousands of dollars.

They are endemic to southwestern Amazonia and adjacent east Andean foothills.

Specifically they occur in eastern Peru north to upper Huallaga Valley (northern Peru, south of Tarapoto), and east to far western Brazil (only in the state of Acre); and south to Apurimac in southern-central Peru and east to western and northernmost Bolivia (mainly in the Pando department) – where they are common only in localities. They are most easily found in the foothills of Cusco in Peru.

During the breeding season, these macaws are usually seen in pairs and when not breeding, they are typically seen in small family groups of up to 4 birds, with occasional records of up to 60 birds occurring at favorite foraging areas.

The general plumage is green; except the forehead, crown and sides of the head are blue. The flight feathers and primary coverts are also blue. The edge of the wing is bluish-green. The outer upper wing-coverts are blue with green edging. The underside of the flight feathers is olive-yellow, as is the underside of the tail. The upperparts of the tail are a rich maroon color turning green and then blue towards the tip.

The bill is black, ivory colored at the tip. The frontal area is whitish. There is a bare, blackish area between the eyes and the bill. The eyes (irises) are yellow with orange-red outer rings. The legs and feet are flesh-colored .

Immature birds can be identified by their darker irises, entirely black bills and greyer legs. Their facial skin and lores (area between the bill and the eyes) is white. Depending on their age, they have shorter tails.

Within their natural range, the Blue-headed Macaws can easily be separated from other macaws by their dark facial skin against the light colored facial skin of the other macaws in that region. 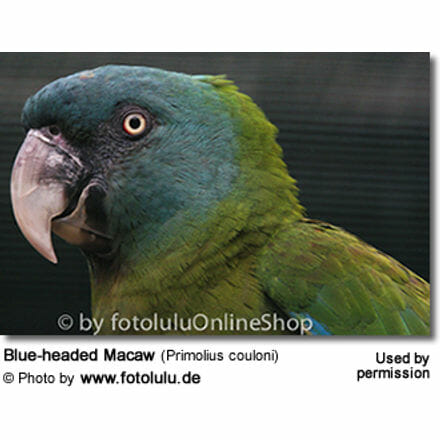 These birds feed on various seeds, nuts, fruits and green food. Most likely, there are some insects in the mix, too, particularly when raising young.

They will also visit clay licks, where they ingest mineral-rich clay. This clay offers valuable protection against toxins naturally found in their diet.

They are usually provided a good quality seed mix: sunflower, safflower, various millets, oats and hemp seeds* are good ingredients. Dried rowan berries and plenty of fresh fruits, vegetables and green food should also be made available, as well as some pine nuts.

They also need mineral supplements – especially before and during the breeding season, calcium supplementation is very important. While raising chicks, parents need soft foods, such as eggfood and half-ripe maize for rearing the young.

(*Hemp Seeds are often referred to as “super-seeds” as they offer a complete amino acid profile, have an ideal balance of omega 3 and 6 fatty acids, and provide an impressive amount of trace minerals – they also have the highest concentration of protein in the plant kingdom.)

Their vocalizations are described as quiet, purring calls in flight as well as soft nasal, slightly rasping notes. Their shrieks and squawks are less raucous than those of the related Blue-winged Macaw. Captive birds are considered medium-noisy macaws. 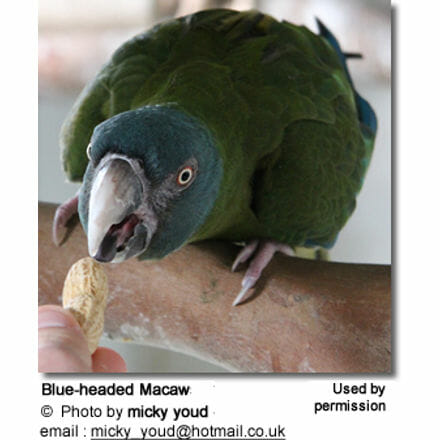