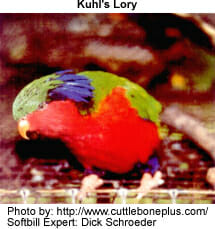 The Kuhl’s Lory (Vini kuhlii) is endemic to Rimatara, a small Makatea Island southeast of Mangaia, as well as Tubuai (Austral Islands). It is found in coconut plantations.The Kuhl’s lory is a nectarivore (nectar eater), and has a brushy tongue to acquire the nectar.

Fossil record and oral traditions show that the Kuhl’s lory was formerly a native bird on most of the Southern Cook Islands – where it was much prized for its small red feathers, which were used for chiefly adornments and for decorating ceremonial headdresses.

The Zoological Society of San Diego has been a conservation partner with French Polynesia in the conservation of several species of lories and lorikeets. It is believed that if invasive ship rats should ever invade Rimatara, the endemic lory would soon become extinct in its natural range. The CRES Applied Animal Ecology Division is working with Cook Islands Natural Heritage staff to increase quarantine procedures and awareness to prevent the introduction of the ship rat and to establish a backup population on an island within the lory’s former natural range, namely Atiu in the Southern Cook Islands. Staff mist-netted 27 Kuhl’s lories, maintained them in field cages, and send them to Atiu for release. Approximately one year post-release, staff plans on participating in a collaborative island-wide survey to determine numbers of release birds, reproductive activity, distribution, and habitat utilization and cultural implications. 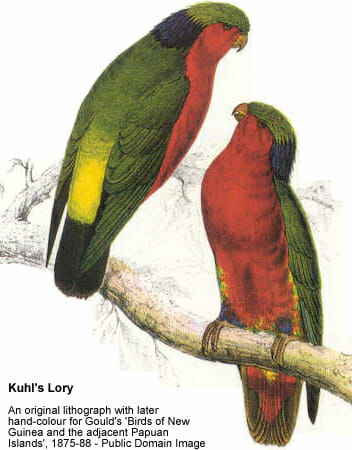 Obviously, this lory is uncommon in captivity.