The Lilac-crowned Amazon – also known as the Finsch’s Amazon Parrot (Amazona finsch) – is endemic to the Pacific slopes of Mexico, from southeastern Sonora and southwest Chihuahua to southern Oaxaca, where they mostly inhabit humid pine-oak forests up to about 6,000 feet (~1,800 meters) elevation.

In the United States, feral populations have established themselves in southern California (Orange Country, Riverside Country, Los Angeles), where this species is found in residential and suburban areas.

A small population of Lilac-crowns has been documented in Santa Barbara County (Linden 2006).

The Lilac-crowned Amazon can expected to live 40 to 60 years. The plumage is mostly green, except for yellow-green face, the red / maroon band across the forehead and the extensive wash of violet-blue on the top of the head (crown) and collar. The feet are bluish. In flight, a red patch of red can be seen in the wings. The outer tail feathers are yellowish-green, except for the central tail feathers which are entirely green.

Juveniles resemble the adults; but have dark brown eyes and white eye rings and ceres (fleshy skin above the beak)

Similar Species: They resemble the Red-crowned Amazon (Amazona viridigenalis), however, can be differentiated by the following: Within its natural range, this amazon is considered “Vulnerable” due to an estimated population decline of 30-49% over ten years due to habitat loss and degradation; and illegal capturing for the pet trade. A decline in its natural range has been documented. This species has disappeared from parts of its previous range.

‘The Lilac-crowned Amazon is readily available in the pet trade. 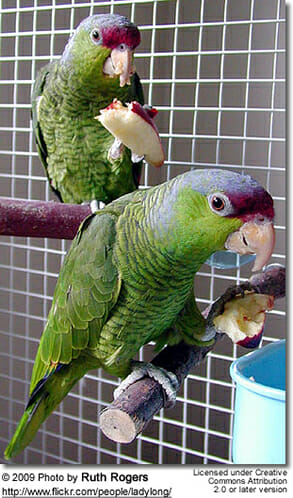 Lilac-crowned Amazons are considered good talkers; however, the quality isn’t considered as good as some of the other Amazon species. Some may never learn to talk at all. They are gentle birds with a quiet demeanor, which makes them a better pet than other more aggressive amazons.

They make wonderful companions for the compatible bird owners, and are appreciated for their clowny personality. They enjoy water and should be provided with showers, about 1 a week. If they are not showered, they will do it for themselves in their water bowl, which can make quite a mess.

Amazon ownership generally presents multiple challenges, such as excessive chewing – especially at certain stages in their life. They do discover their beaks as method of “disciplining us” once they are out of the “baby stage” and they can generally be somewhat naughty, and it really is important to learn to understand them and to guide their behavior before an undesirable behavior has been established.

Aggressive behavior is especially common in “hormonal” amazons. Undisciplined amazons will chew on electric wiring potentially causing house fires. They regard anything in your home as a “toy” that can be explored and chewed on; destroying items that you may hold dear or are simply valuable.

ID: Slightly larger in size. The plumage is somewhat duller. It has a narrower forehead.