The Musk Lorikeet (Glossopsitta concinna) is endemic to south-central/eastern Australia, including Kangaroo Island] and Tasmania

They are found in open forests and woodlands, particularly where there are large flowering eucalypts. They feed primarily on nectar and pollen of flowering Eucalypts, but may also visit orchards to forage on ripe fruit.

The musk lorikeet breeds mainly from August to January. Their nests are usually built in a hollow limb of a tree. 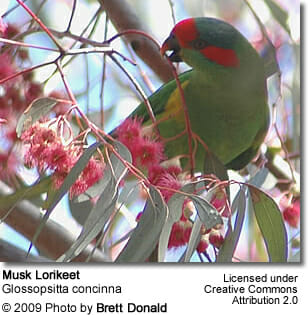 The Musk Lorikeet’s most distinctive features are its red bill and forehead, blue crown and a distinctive yellow band on its wing, as well as its sweet musky smell, probably from which their name “Musk” originates. The Musk Lorikeet averages 22 cm (9″) in length and weighs about 60 grams. There is little or no difference between sexes.

The plumage of the female may be somewhat duller – particularly on the head. But this is an unreliable sexing method. Surgical or DNA sexing is recommended.

There appear to be no natural mutations of the Musk Lorikeet, however an Olive Musk has been developed by crossing with Olive Scaly-breasted Lorikeets.

Lories and Lorikeets: Overview (Naming, Range and Description) … Listing of Species … Photos of the Different Lory Species for Identification

Lories and Lorikeets in Aviculture … Lorikeets as Pets