The Purple-crowned Lorikeets (Glossopsitta porphyrocephala) are distributed from eastern Victoria to the south of Western Australia. They are found in lightly wooded habitat such as mallee scrub as well as eucalypt woodland and coastal scrub.

This species is nomadic, with the pattern of distribution varying from year to year according to flowering conditions. They primarily feed on nectar and pollen of flowering Eucalypts, but may also raid orchards to feed on ripe fruit.

The Purple-crowned Lorikeet is a very small lorikeet, approx. 16 cm in length, with a purple crown, apricot orange forehead and ear-coverts and a black bill. Upper parts are bright green, with a wash of bronze across the nape and mantle, while underparts are greenish-yellow with a pale blue belly. There is a small patch of bright blue at the bend of wing, with underwing coverts bright red, and obvious in flight.

They are more often heard than seen, calling often in flight. The call is a high-pitched slightly metallic ‘tziet, tziet’.

In captivity, these lories are usually not shy. This lory has a tendency to obesity especially when kept in a small cage.

This lory enjoys bathing and being sprayed and its mainly “sticky” diet increases the importance for this parrot to be able to wash any sugary liquids off its plumage.. 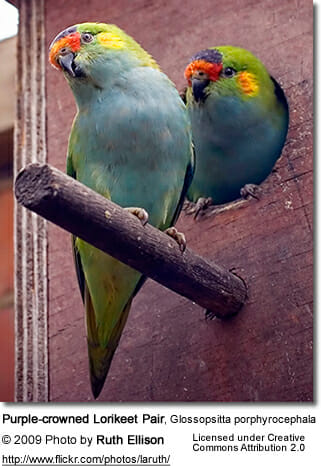 A colony system with other small birds possible. Large aviaries can also be planted as chewing requirement not very great. In Aviculture, this active lory was found to be very susceptible; often dying without discernible cause. Very strict hygiene necessary; minimum temperature during acclimatisation not less than 75°F (24°C).