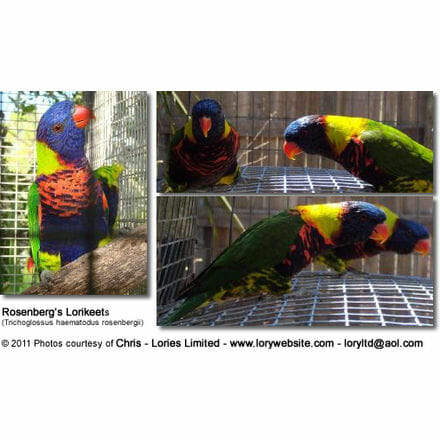 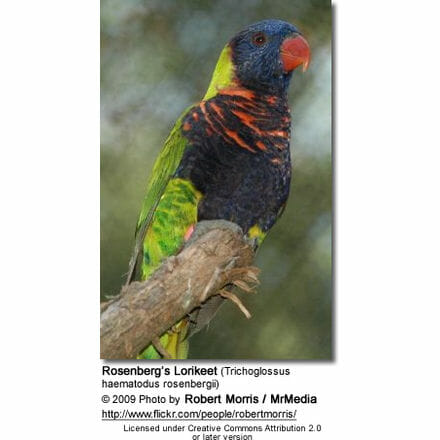 The Rosenberg’s Lorikeets (Trichoglossus haematodus rosenbergii) have previously been referred to as Rainbow Lorikeets, but have since been identified as a distinct sub-species.

The Rosenberg’s Lorikeets are endemic to the Island Biak in Geelvink Bay, off the north coast of (Western) New Guinea, Indonesia.

They are common in lowlands, but occur up to 2640 ft.. They are found in a wide range of habitats, including settlements to forest, coconut plantations, savanna, and mangroves.

In their natural habitat, they form small noisy groups that forage for food high up in the canopy. They are frequently seen in mixed flocks with other parrot species. At night, they form communal roost with hundreds of birds.

They are important pollinators for coconut species.

The head is blue and the breast reddish-orange with heavy blue barring. The abdomen /belly is dark blue. The back of the neck has a broad yellowish-green hind-collar with a fine red line where it meets the crown. The back and the wings are green. The underwing has an orange band. The beak is orange red. The irises are orange-red and the legs are grey. 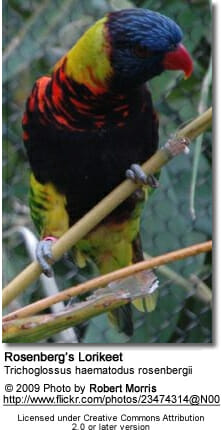 Similar Species: Rosenberg’s Lorikeets look like the nominate Green-naped Lorikeet (T. h. haematodus), but the violet coloring on the head is stronger. The chest feathers have a broader edging. They have a very broad yellow band to the nape (back of the neck), edged at the top with a narrow red band. The abdomen is violet-blue. There is a broad orange band across the underside of the flight feathers.

Within their natural range, they generally start breeding in September through October – although breeding has been recorded in most months. Their courtship display consists of fluttering to reveal under wing pattern, upside-down swings, head-bobbing, tail-fanning as well as bill-fencing

The average clutch consists of 2 to 3 eggs. The hen incubates the eggs for about 24 to 27 days and the young fledge when they are about 80 days old. 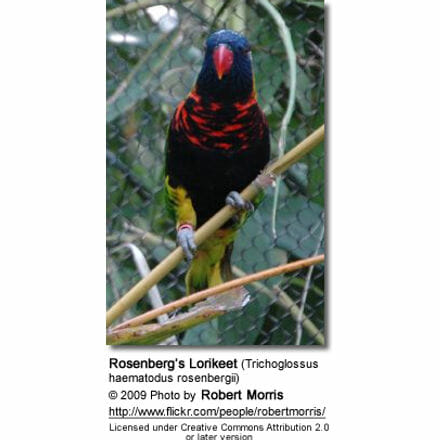 Their natural diet consists mainly of nectar and pollen, but also includes fruits such as figs, citrus, papaya and mangos opened by fruit bats. They may also feed on moth pupae and insects.

Their captive diet typically consists of 30% nectar, 30% fruits and veggies, 30% bird of paradise pellets, 10% plants / flowers, and whatever else the caretakers deem appropriate and healthy for this species.

In flight, they make sharp rolling screeches at regular intervals. Shrill chattering can be heard while feeding. At rest, they make a soft twittering sound or a loud clear musical contact call.

Lories are typically quite easily bred, so many lory species are readily available. Their expected lifespan is 28+ years, provided their specific dietary needs are met. They reach maturity at 8 months or later.

Males and females look alike and breeders depend on DNA or endoscopic sexing to determine their gender. 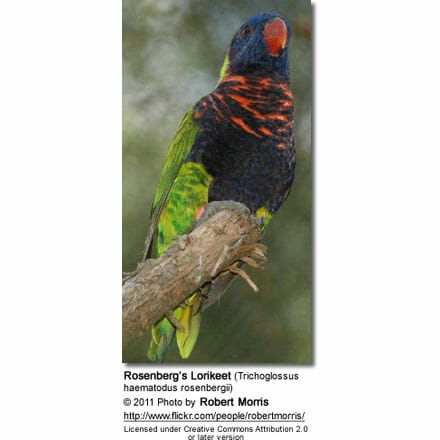 The bulk of their natural diet consist of nectar, flowers, fruits, pollen and seeds.