The White-eyed Conure or White-eyed Parakeet (Aratinga leucophthalma) is native to northern South America – with a range that stretches from eastern Venezuela, Colombia and the Guianas in the north across Brazil to northern Argentina and Uruguay.

Their habitats are forests, woodland areas, savannas and mangroves. The breeding season in Argentina stretches from November to December and in northern South America from February to June.

They usually nests in tall palms but in urban areas they are at times found nesting under roofs and in other cavities. The average clutch consists of 3 to 4 eggs.

They are nomadic and conspicuous because of their noisy calls. They are often seen flying and their flight is described as swift and straight with rapid wing-beats.

They occasionally are seen foraging with Blue-crowned Conures (Aratinga acuticaudata).

This conure is overall green, slightly paler on the breast and abdomen, with red on the shoulders and some random red specks on the head and neck. There are a few scattered red feathers to the bend and edge of wing, as well as outermost lesser under wing-coverts / feathers. The underwing primary wing coverts are red tipped yellow. The underside of the wing and tail feathers are olive-yellow. The irises are brown, the feet are grey, and the bill is horn-colored.

Juveniles have little or no red and yellow in their plumage and have dark irises.

Their call is described as sharp and metallic.

Their natural diet consists of fruits (including berries), seeds (grass), flowers, vegetable matter and nuts found in trees, as well as insects and their larvae.

Their captive diet should consist of a good quality dry mix that includes safflower and sunflower seeds, oats, hemp, buckwheat, canary seed and rowan berries. Seeds should also be offered in sprouted form.

They should also be given plenty of fruit, vegetables and greenfood. A regular supply of branches with flowers and buds provides extra nutrition and satisfies their urge to chew. Eggfood and dried shrimp are particularly important during the breeding season. A mineral and vitamin supplement, as needed.

The White-eyed Conures are amongst the better talkers of the conure family. Well-socialized White-eyed Conures can be sweet and loving pets. They are rarely destructive and are generally not screamers, often choosing to mimic speech instead.

Personality always varies from bird to bird, but they are generally known to be very playful and inquisitive. As is the case with most conure species, they can get loud at times – some more often than others, depending on personality and training. 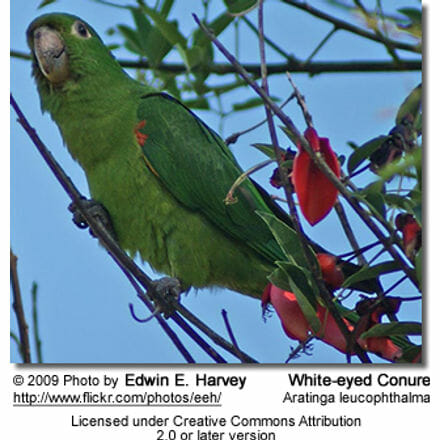 In North America, they usually start nesting in March or April, in Argentina November to December, and in northern South America from February to June. The usually nest in palm trees. The average clutch consists of 3 to 4 eggs, each egg measuring 31.0 x 25.0 mm (1.22 x 0.98 ins).

These are active, medium-noisy to noisy parrots. Imported birds are mostly shy and are slow to grow confiding with their caretakers. They greet strangers with loud screeching as they approach.

They are hardy when acclimatized. They are very hard chewers and need a constant supply of fresh branches. They enjoy bathing.

They require spacious flights, the minimum dimensions should be: 3 x 1 x 2 m (9 x 3 x 6 ft) with a sheltered area. It’s important to protect them from frost. They should have available a roosting box throughout the year, which will serve as a nest box once they get into breeding mode.

The White-eyed Conures are appreciated by breeders for their good parenting skills, although this species is rarely kept. They often only start breeding after several years.

Once they get started, they can be quite prolific and in the right climate, may even breeding throughout the year, producing up to six clutches – although most will only breed twice during a year. Double-clutching is possible if the first clutch is pulled for handrearing.

Breeding requirements for White-eye Conures are much the same as for other conure species. 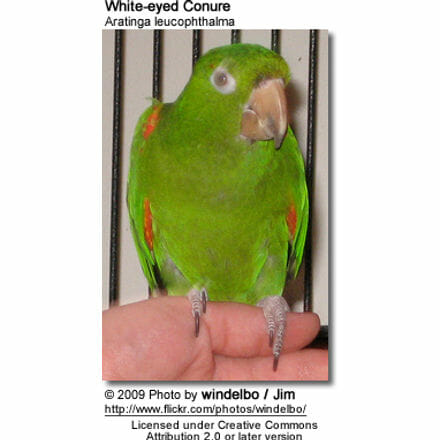 Distribution: They are endemic to the extreme southeast Brazil in Santa Catarina and Rio Grande do Sul; northeast Argentina in Misiones und Corrientes. They are typically observed along the forest edge, in secondary vegetation, in areas with deciduous and gallery forest; in mangroves; in rain forests along water courses; as well as partially forested humid areas in tropical and sub-tropical zones up to 1,800 m (6,000 ft), exceptionally to 2,500 m (8,300ft). They are endangered in their own habitat (CITES II)

For pet quality, breeding and care requirements, please scroll up …

Distribution: Their natural range is the tropical zone in Eastern Ecuador, North-eastern Peru, Upper Amazon, northwestern Brazil in the upper Amazon region. They are typically observed along the forest edge, in secondary vegetation, in areas with deciduous and gallery forest; in mangroves; in rain forests along water courses; as well as partially forested humid areas in tropical and sub-tropical zones up to 1,800 m (6,000 ft), exceptionally to 2,500 m (8,300ft). They are endangered in their own habitat (CITES II)

Description: They average 32 cm or 12.5 inches in length with a wing length of 170 – 186 mm (6.5 – 7.5ins). They look like the nominate White-eyed Conure (leucophthalma) featured above, but has a slightly darker plumage, most birds have red feathers on the lower cheeks, and their bills arelarger and heavier.

For pet quality, breeding and care requirements, please scroll up …