It formerly included the Red-browed Amazon as a subspecies, but is now considered monotypic (one single species).

This rare species is found in northeast South America; specifically in south-east Venezuela (Bolívar with an isolated record in Amazonas), north Guyana, north-east Suriname and north-east French Guiana. There are reports from Pará and Amapá, Brazil, where its occurrence seems probable, but there are no conclusive records.

They inhabit humid forest and cloud-forest in the lower subtropical zone, but are known from savanna woodlands in Venezuela. This species occurs up to 1,700 m in Venezuela and 560 m in Guyana.

There are some seasonal movements most likely in response to food availability, from interior to coastal Suriname in July to August.

The numbers of this species have declined as a result of trapping for food and pet trade as well as habitat loss, particularly in the Gran Sabana region of Bolívar and parts of coastal Guianas. 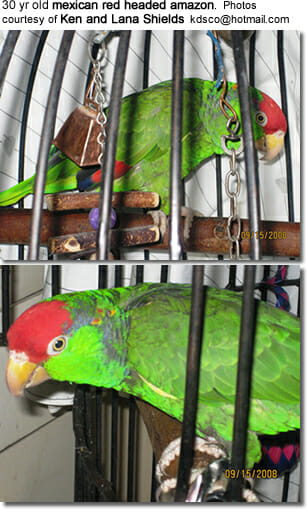 The plumage is mostly green. It has blue cheeks from around the eye to the neck (less on young). The have a yellow-orange wing speculum, a yellowish crown and orange lores (the region between the eye and bill on the side of a bird’s head).

The bill is grey with pink/red at base of upper bill. The eye rings are grey and the irises are orange/red.

Juveniles look like adults but duller. The forehead and lores are dull yellow. The crown and occiput are green. The lower cheeks to ear coverts (feathers covering the ears) are green, slightly washed blue.

There is less yellow on the outer secondary (wing) feathers. The bill is pale pink tinged grey. The irises are brown and the eye rings grey/white. 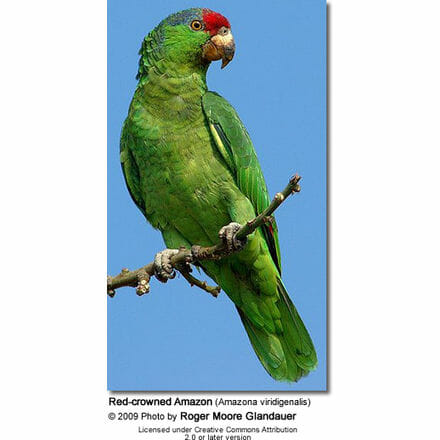