Its preferred habitat includes lowland forest areas (generally below 700m), open woodland, orchards and plantations, mangroves, dense scrub, and coconut groves; where it is commonly seen in flocks of up to 20 birds.

It mostly feeds on seeds, fruit and blossoms.

The average clutch consists of 3 to 5 eggs which are incubated for about 26 days. 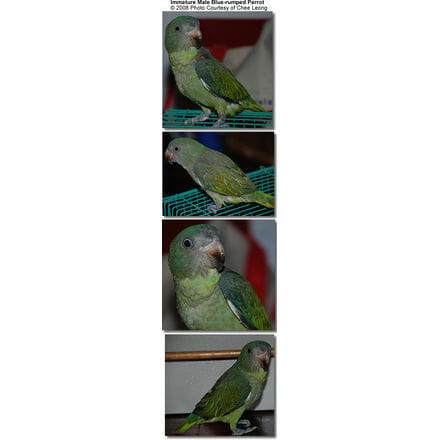 Chee (the contributor of most of the photos on this page) describes these birds as being active at dawn and dusk. They are not playful and don’t seem to interact much with humans.

They are described as docile that love to sing on rainy days. Because of their melodic voice, they are often kept singly – as singing birds. However, not all them are born singer – in fact, some are mute. It is recommended to buy young ones as they are more likely to sing. However, in general these are very quiet parrots with occasional whistling and high-pitch calling, which may be irritating to some individuals.

Sanggay – an owner of several Blue Rumped Parrots – stated that Blue-rumps have limited talking ability. Some of them learn to talk – but most never do.

Wild caught birds are quickly hand tamed by individuals with some bird training skills. Unfortunately, they are easy to catch as they freeze when they get scared. Hunters only need to shoot into the air or make some noise around roosting birds and they will freeze and can easily be picked up. This has lead to their endangered status..

This small parrot – averaging 7.2 inches or 18 cm in length – is primarily green, with bright red shoulder patches, and yellowish margins on the wing coverts.

The male has a black mantle, red upper beak, and greyish-blue head and rump, with a brighter blue to the forehead and crown. The breast and abdomen are greyish-olive. The thighs and under tail-coverts greenish-yellow with bluish tips. The back is blue-black with each feather edged greenish-grey. The lower back and upper tail-coverts are deep blue. The sides of the body and the wing-coverts and bend of wing are red. The outermost lesser wing-coverts are brownish-red. The wings and greater wing-coverts are dark green. The secondaries (shorter, upper “arm” feathers) and wing-coverts have a greenish-yellow edging. The upperside of the tail-feathers are greenish-yellow and the underside is yellow. The upper beak of the male is red and his lower beak is brown-blackish. The irises are pale yellow and the feet are grey.

This species is sexually dimorphic (which means that males and females can be visually sexed – once they have gained their adult plumage).

Females look similar to the male except hens have a grey-brown head. Her ear-coverts are tinged olive-yellow. The back, lower back and upper tail-coverts are green. There is a bluish patch to the lower back. The breast and abdomen are yellowish-green. The outer under wing-coverts are green. Both the upper and lower beaks of the hen are brown-blackish, while the upper beak of the male is red.

Immature birds look like females, but their head is green. Young males usually have a bluish tinge to forehead; under wing-coverts partially red. The irises are greyish-yellow. 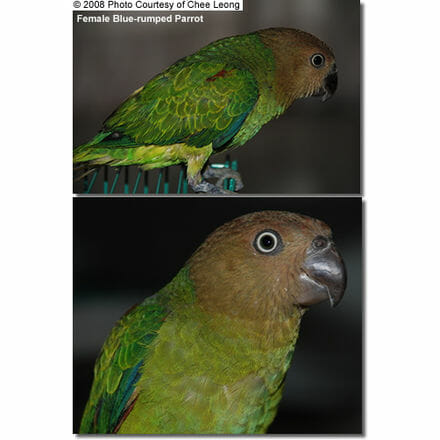