The colorful Crimson Shining Parrots (Prosopeia splendens) – also known as Crimson Musk Parrot or Kadavu Musk Parrot, are noisy and sociable parrot is usually seen in small flocks of up to a dozen birds that are mostly found in or near the forests on Kadavu and Ono. 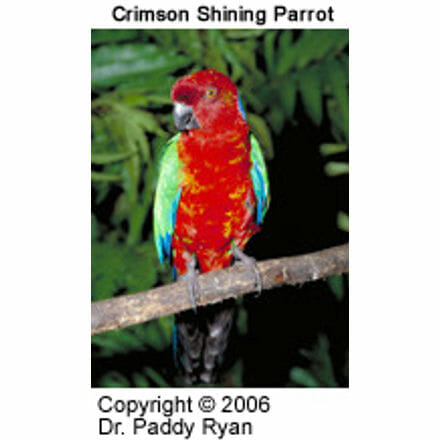 The colorful Crimson Shining Parrot (Prosopeia splendens) – also known as Crimson Musk Parrot or Kadavu Musk Parrot – is endemic to southwest Fiji, on the islands of Kadavu and Ono in the Kadavu Group, and has also been introduced to Viti Levu as escaped pet birds, but there are no known records of them successfully breeding outside of Kadavu and Ono. On Kadavu it is unlikely to be mistaken for the other species of parrot found on that island, the Collared Lory.

This noisy and sociable parrot is usually seen in small flocks of up to a dozen birds that are mostly found in or near the forests on Kadavu and Ono. During the breeding season, pairs usually isolate from the flocks and are often observed foraging for food.

The Crimson Shining Parrot is a common forest species that can be seen in mangrove to wet mountain forest areas, and recently has taken to visiting gardens and agricultural land. 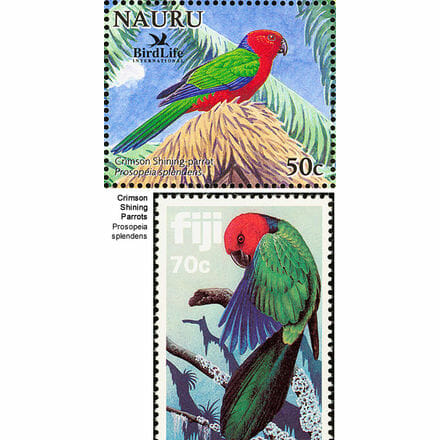 The Crimson Shining Parrots are popular cage birds and are highly prized in aviculture.

The Crimson Shining Parrot is listed as vulnerable because only one single population is recorded, and that population continues to decline due to illegal trade, habitat loss and habitat degradation. It is estimated that only 6,000 of them still exist on the island of Kadavu. The illegal trapping of these parrots for the pet trade presents a serious threat to its continued existence in its natural habitat.

Conservation projects have reduced the numbers trapped for trading off Kadavu; however, forest fires in recent years have further decimated populations.

The most serious threats to their survival constitute the destruction of its habitat and trapping for the pet trade. Predation by introduced mammals, such as feral cats and rats, also constitute possible threats.

The Crimson Shining Parrot is listed as Vulnerable under the IUCN Redlist of Threatened species and is protected by law against trading and transfers out of Kadavu and Ono.

Crimson Shining Parrots is a medium-sized parrot that is similar in size to Fiji’s other two endemic Shining Parrots – the Masked Shining Parrots (Prosopeia personata) and the very similar allopatric (geographically separated) Red Shining-parrot (Prosopeia tabuensis) – measuring 42 to 45 cm (~16.5 ins) from the tip of its beak to the tip of its tail, with a wing length of 215 – 245 mm or 8.5 – 9.6 ins. During flight, it has a long-winged appearance, flying with undulating bouts of flaps and gliding.

The Crimson Shining Parrot or Kadavu (splendens) is the most distinctive of Fiji’s colorful Shining Parrots. This parrot has a bright red and green plumage and a long tail. The head, neck, breast and belly are crimson-red. A broad blue collar extends across the back of the neck. The back, rump and tail are a bright green. The flight feathers and tail are green, strongly suffused with blue. The bill and feet are black, and the irises are orange.

Males and females are similar, however, the bill of males is larger and the head is more square-shaped than that of the hens.

The main features that distinguish the Crimson Shining Parrot from Fiji’s other two shining parrots – the Masked Shining Parrots (Prosopeia personata) and the very similar allopatric (geographically separated) Red Shining-parrot (Prosopeia tabuensis) – are the scarlet as opposed to maroon underparts and the striking blue collar at the back of the neck.

The Crimson Shining Parrot is considerably larger and longer-tailed than the only other parrot on Kadavu, the Collared Lory (Phigys solitarius)

Although they tend to be quiet during the daytime, towards the evening, the Crimson Shining Parrots get very noisy, giving a variety of raucous squawks, dry rattles and screeches, which are of a higher pitch than those of the Red Shining-parrot.

These parrots may learn to talk.

In their natural habitat, Crimson Shining Parrots normally nest between June and October. It is assumed that they are tree cavity / hole nesters like the Red Shining Parrot. They lay 2 or 3 off-white eggs.

Crimson Shining parrots are highly prized and extremely rare in captivity – only 6,000 of them are said to exist in their natural habitat. The numbers in captivity are unknown, and all indications are that captive breeding has seldom been achieved. As they are at serious risk of extinction, only the most experienced should attempt to maintain them in their aviaries, and all captive-bred should best be placed into breeding programs to hopefully establish a larger population and participate in the conservation of this bird species.

During the daytime they are generally quiet, although they are quite vocal towards dusk, at which time they tend to be more active. They are often observed flying around at night. They enjoy bathing and a bathing dish should be available at all times. These birds are susceptible during the acclimatization period, at which time they are particularly sensitive to cold. It’s important to keep the temperature above 23°C (72°F). Once they are properly acclimatized, the minimum temperature could go as low as 15°C (59°F) – but it should never be allowed to go below that..

In the northern hemisphere the breeding season may start in February or March and go on until May or June.

This energetic species would do best in a planted aviary that is long enough for them to fly to keep them in good physical condition. The recommended aviary dimensions would be close to these dimensions: flight / aviary 5 x 1 x 2 m (15 x 3 x 6 ft). If you have space to build a larger enclosure, even better.

The minimum length of the flight would be 14.7 ft or 4.5 m. They enjoy bathing, so it’s important to make available shallow water bowls for them to bathe in. An automated misting system would be optimal. A good supply of bird-safe fresh branches with flowers should be available at all times. Also fir, willow and pine branches make good perches for them. Additionally, they should be provided chew toys for exercise and entertainment.

Natural diet: They eat a variety of soft and hard fruits, including mangos, papayas, bananas and berries, as well as buds, seeds, young leaves and other plant material, as well as some insects, such as caterpillars. They may also visit farms and gardens, mangroves and secondary forest areas.

Captive diet: It’s best to stick to their natural diet as much as possible. Therefore, a variety of fruits, such as bananas, mangos, peaches, papayas, and berries (organic only) , should be part of their diet. Breeders also feed lory nectar from fruit, pollen, brewer’s yeast, rice and multi-grain flakes, dextrose, low fat yoghurt. They like biscuit softened in nectar, fresh branches for chewing with flowers and buds, as well as half-ripe maize. Various seeds – sprouted and unsprouted – should be offered daily.

Platycercus splendens Peale, 1848, Peale’s River, Viti Levu, Fiji Islands. Sometimes considered conspecific (of, or belonging to, the same species) with Red Shining Parrot (Prosopeia tabuensis) , but may be closer to the Masked Shining Parrots (Prosopeia personata). They are monotypic (a genus consisting of only one species).