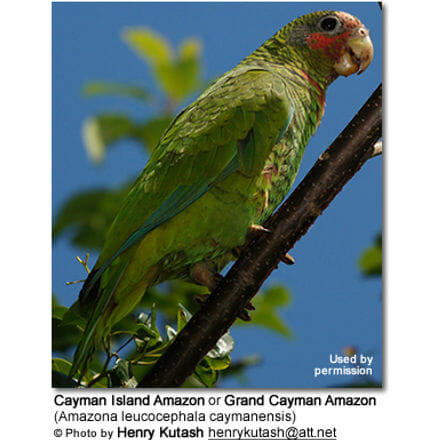 It is also named for its physical characteristics: Rose-throated Parrot or White-headed Amazon Parrot.

The Cuban Amazon is currently considered to form *superspecies with the Yellow-billed Amazon / Jamaican Amazon (Amazona collaria) and the Hispaniolan Parrot (Amazona ventralis), and all may be conspecific (one and the same species).

(*Superspecies are closely related species with non-overlapping distributions; they are thought to have evolved from the same species).

In the wild, they typically gather in large, noisy flocks, which separate into pairs during the breeding season.

Cuban Amazons are endangered and are on both the international and on the U.S. federal endangered species lists. This makes them illegal to ship across state lines to anyone that does not have a federal permit to keep them.

They are rare and expensive; in fact, this is one of the most expensive Amazon species on the market. 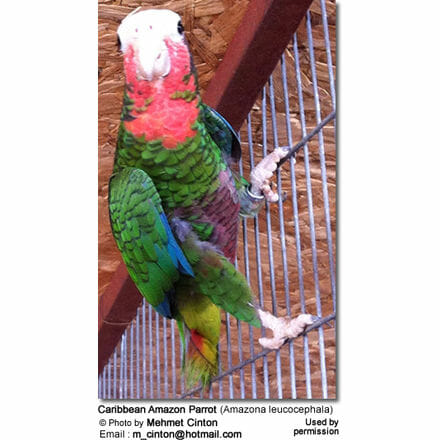 The Caribbean Amazon Parrot is native to the Bahamas, Cuba and Cayman Islands in the Caribbean. These parrots are rare in the United States and can mostly be found in Florida, where they were imported by Cuban immigrants and bird collectors.

The Cuban Amazon is classified by Birdlife International as Near Threatened as their numbers have been declining due to agricultural conversion of its habitat, hurricanes, predation by feral cats, and trapping for the pet trade.

This species is listed with the Convention on International Trade in Endangered Species of Wild Fauna and Flora (C.I.T.E.S.), as an Appendix I species (close to extinction).

They are also listed as an endangered species on the United States Fish and Wildlife Service’s (USFWS) Endangered Species List. A USFWS Captive Wildlife Permit is required for any international or interstate movement of these birds. 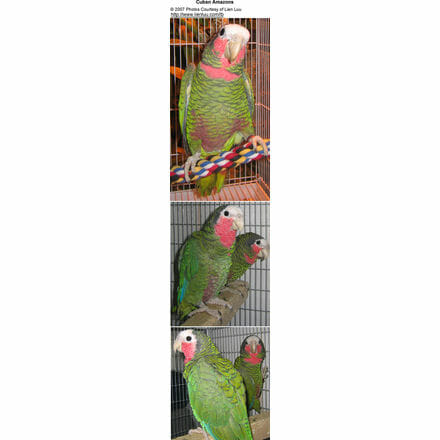 Formerly widespread and common, they have disappeared in some areas and their numbers have decreased in others due to habitat loss, hurricanes, and capturing of chicks and fledglings for the pet trade.

Even though their trapping is now forbidden in in Cuba and other Caribbean islands, illegal poaching continues.

However, due to conservation efforts in recent years, its numbers have stabilized and appear to be increasing particularly in protected areas.

Habitat: In Cuba (including Isle of Pines), they inhabit dense native broadleaf and pine woodland

In the Bahamas, they are restricted to Abaco and Great Inagua Islands, where they used to be common, but are not considered rare.

Historically, they also occurred on New Providence, San Salvador, Long Island, Crooked Island and Acklins, but they are now extinct on these islands.

Bones of this parrot were found on New Providence that have been dated back to the Pleistocene Era – more than 50,000 years ago.

On Abaco, the parrot’s ground–nesting behavior made them vulnerable to predation. A predator control program is being implemented in the park.

In the Cayman Islands, they only occur on the Grand Cayman and Cayman Brac islands – where they are fairly common.A survey in 2006 indicated that the population on Grand Cayman consisted of 3,402 individuals (in 1992, estimated population was 1,500).

On Cayman Brac, the population was estimated to be 400 – 500 birds. They are usually found in dry forests, palm groves, mangroves, plantations, agricultural areas and gardens. 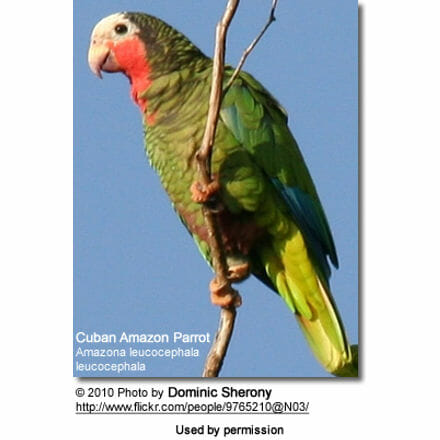 Presently divided into four subspecies, one occurring on Cuba, two in the Cayman Islands and one in the Bahamas:

Present throughout Cuba and the Isla de la Juventud (also known as Island of Pines).The population occurring on the Isla de la Juventud and western Cuba was formerly given subspecies status: Amazona leucocephala leucocephala (Todd, 1916), mostly based on the darker green plumage of a collection of specimen. But in 1928, it was decided that the color difference was caused by preservation.

Currently, two populations exist in the Bahamas; one on the Abaco Islands and one on Great Inagua

ID: Resembles the nominate form, except the plumage is a darker green. The patch on the belly is more extensive and the throat is a deeper red.

ID: Larger in size than the nominate form. Adult plumage is more yellowish-green, with less evident edging to the feathers. The chest and rump (lower back) is tinged with blue. The white on the head is confined to the forehead. The green on the sides of the neck separate the reddish throat from the cheeks. The belly patch is less extensive.

ID: Smaller in size than the nominate form. The adult plumage is more yellowish-green. The maroon-colored belly patch is larger. The cheeks and throat are a deeper pink/red. 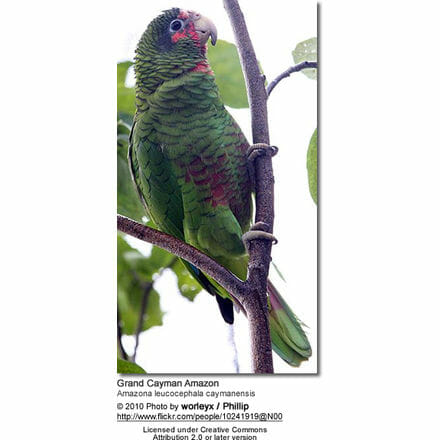 The plumage is mostly green, except for the bright pinky-red throat and cheeks, white feathers around the eyes and the forecrown, and the dull maroon to purple-pink abdomen.

The outer flight feathers (primaries) are blue. Plumage coloration varies between the different species, particularly on the face, chin and throat. The bill is a pale yellow or horn-colored. The eyes are olive-green.

Gender ID: There is very little difference in the coloration and/or size between males and females. DNA sexing is the most reliable method to determine their sex.

Immature birds have little or no red on the abdomen and less pink on the chin, neck and face. The forecrown is washed with yellow. The feathers have less black edging. 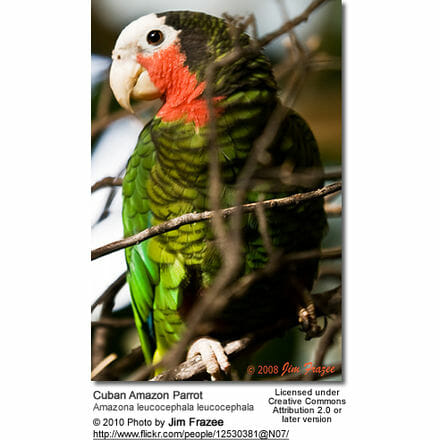 The breeding season usually starts in March and goes on until September.

Throughout most of their range, they nest in tree cavities (such as abandoned woodpecker nest holes) and dead palms that have lost their foliage. The Abaco Island (Bahamas) population, however, has adapted to nesting underground in limestone crevices, where they are protected from wildfires.

The average clutch consists of 2 – 5 white eggs, which are incubated by the female for 26 – 28 days. The male assumes responsibility for feeding the brooding female.

The young hatch about 12 – 72 hours apart. The hatchlings are blind with only little down. They are completely dependent on parental care. Their eyes open when they are about 2 – 3 weeks old.

The parents feed them regurgitated (predigested) food and brood them to keep them warm. These amazons have been known to double-clutch given the right conditions.

The Cuban Amazon is considered one of the more difficult-to-breed Amazon Parrots due to the fact that captive males commonly display aggressive behavior towards their mates and chicks.

Until the 1980s, the Cuban Amazon was rarely found outside of its native range and Florida, where it was imported and bred by Cuban immigrants. However, this species is now more readily on the market; however, it is still one of the highest-priced of all Amazons. Several color mutations have occurred in captive-bred stock.

In their natural habitat, these parrots feed on various fruits and seeds, including the fruits of many species of palm trees, oranges and other edible fruits, poisonwood berries, and West Indian mahogany (Swietenia mahagoni) seeds. They are sometimes a nuisance to local farmers.

Caribbean Amazon Parrots are very noisy, especially when they occur in flocks. Their calls are described as loud shrieks, whistles, screeches and some trumpet-like sounds. Some notes are drawn out and resonant.

Captive birds have the ability to make outstanding talkers.