This species was in the past thought to be a race of Salvadori’s Fig Parrot. The Edward’s Fig Parrot averages 7 inches (~ 18 cm) in length. The most distinguishing features of the male fig parrots are the broad blue-black band on the upper breast, the red belly and lower breast and the broad black line through the eyes to the hind crown and nape. It has a green forehead.

The lores (the regions between the eyes and bill on the side of a bird’s head) and crown are yellowish-green cheeks. The side of the head is yellow. It has greenish blue patches under the eyes. There is a narrow violet-pale blue band on the breast progressing to the red band.

Females lack the red on the breast.

Immature males start to show their typical male colouration at about ten months at the earliest.

Edward’s Fig Parrots in Aviculture or as Pets:

Rarely found in the pet trade, aviculturists insist that hand-raised parrots make excellent pets. They are vivacious, gregarious, very active and playful birds that tame easily. Their fascinating behavior patterns, coupled with their very bright and colorful plumage, make these little gems very attractive birds to own, both as pets as well as aviary occupants.

Breeding is regularly achieved. They do best in a spacious aviary / flight and their dietary requirements and the messy feeding habits they share with other fruit-eating birds necessitates strict hygiene to avoid a contaminated environment and resulting disease.

Fig-parrots generally breed prolifically and make good parents. Breeders can leave the chicks with the parents even after they have gone back to nest and older chicks will often assist in the rearing of future clutches. 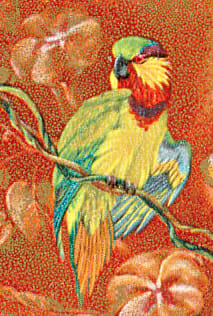 Diet of / Feeding Your Fig Parrots