The Hoffman’s Conure (Pyrrhura hoffmanni), also known as Sulphur-winged or Sulfur-winged Parakeet, is endemic to the highlands of southern Costa Rica and western Panama. Their preferred habitat includes mountain forests and open woodland up to 3000 m – but they sometimes move down to 1300 m in the wet season.

Sulphur-winged Parakeets feed in flocks of 5-15 birds at treetop level, taking various seeds and fruits including figs. Its flight call is a grating toweet-deet-deet-toweet, and when perched it has a reedy zeeweet.

During breeding season, hens lay, on average 3 white eggs in an unlined nest cavity 8-20 m high in a tree, which may be an old woodpecker hole or a broken stub. Both male and female incubate the eggs for about 23 days.

The Hoffman’s Conure is uncommon in aviculture and not readily available. The only birds in the U.S. belong to a breeding consortium owned and managed by Dale Thompson. 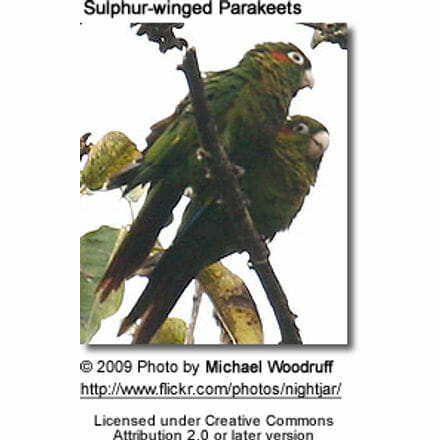 The adult is mainly green. scaled with orange on the head and chest. There is a red nape spot and the tail is dull red. The outer primaries (longest wing feathers) of the wing are blue, but the most obvious feature in flight is the extensive yellow on the inner wing.

Young birds are similar to the adults, but duller and with much less yellow in the wing.

There are two recognized sub species:

Sub-species Identification: They look alike except that the Chiriqui Conure has a more pronounced yellow on the head, which will shade to a orange on the crown and to a red on the back of the nape

Since they are so rare in captivity, it would be best to place any suitable conure into a breeding program to ensure species survival. If, for some reason, a conure proves unsuitable for breeding, they will probably be best suited for an aviary environment. If it is a young conure that has been socialized then it should make a nice pet.

Description: The Chiriqui Conure (Pyrrhura hoffmanni gaudens) looks like the nominate species featured on this page, except that the Chiriqui Conure has a more pronounced yellow on the head, which will shade to a orange on the crown and to a red on the back of the nape.