The Kākās, Nestor meridionalis, are parrots that are native to the forests of New Zealand, where they inhabit South and Stewart Island, larger offshore islands. These parrots live in the lowland and mid-altitude forest. They are mostly found in the offshore reserves of Kapiti Island, Codfish Island and Hauturu/Little Barrier Island.

The name Kākā comes from the Māori language but the name kaka is also the general Polynesian word for a parrot.

Plumage  Details:  The Kākā is a medium sized parrot, around 45 cm in length and weighing about 550 g, and is closely related to the Kea, but has darker plumage and is more arboreal.Greenish-brown; forehead, crown and nape greyish-white, sometimes feathers tipped dull green; neck and abdomen brownish-red, hind-neck more crimson and with yellow and dark-brown margins; breast olive-brown; ear-coverts orange-yellow; rump, upper and under tail-coverts red edged with dark-brown; under wing-coverts and undersides of flight feathers crimson; tail brown with pale tips; iris dark-brown; feet dark grey; bill brownish-grey.

Both sub-species have a strongly patterned brown/green/grey plumage with orange and scarlet flashes under the wings; color variants which show red to yellow coloration especially on the breast are sometimes found.

Immatures as adult, but with yellowish base to the lower beak. 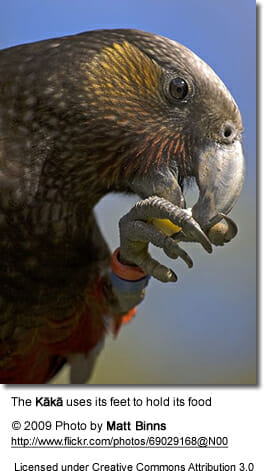 The Kākā feeds on fruits, berries, seeds, flowers, buds, nectar and invertebrates (i.e., insects). It has a brush tongue with which it feeds on nectar, and it uses its strong beak to dig out the grubs of the longhorn beetle.

CITES II – Endangered … The Kākā is considered vulnerable (CITES II). It has greatly declined, in part from habitat loss, in part because of introduced wasps and possums, which compete with the Kākā for honeydew, which is excreted by scale insects.Research has shown that this honeydew is very important for breeding birds, especially those breeding in southern beech forests.The difficult nature of controlling the wasps makes the Kākā’s future very uncertain. A closely related species, Nestor productus, the Norfolk Island Kākā, became extinct in 1851.

Immatures as adults, but with olive-brown breast.