The Red-lored Parrot – also known as Primrose-cheeked Amazon or “loro cariamarillo” (Amazona autumnalis autumnalis) – is endemic to the tropical regions of the Americas, from eastern Mexico south to Ecuador.

A disjunct population exists in central Brazil, where it occurs in humid evergreen to semi-deciduous forests up to 1,100 m altitude.

It is absent from the Pacific side of Central America north of Costa Rica.

Not originally known from El Salvador, a pair – perhaps escaped from captivity – nested successfully in 1995 and 1996 in the outskirts of San Salvador and the species might expand its range permanently into that country in the future.

It is one of the most common pet parrots here in the United States, although it is considered endangered in some areas, notably parts of Mexico and Venezuela. This parrot appears to adapt to human-altered habitat to a considerable degree.

However, the major threat to its existence is the trapping for the pet bird trade. 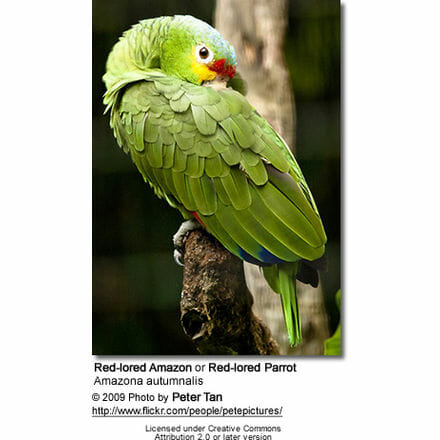 The plumage is primarily green, with red forehead, in some subspecies yellow cheeks (sometimes with red spots). The crown is blue and thick. The tip of the lower beak is gray horn; the upper beak is light horn-colored. The feet are light to dark grey.

Males and females look alike; although some breeders opine that mature females have brown irises while mature males have a golden iris. If identifying the correct sex is important, this imprecise technique may not suffice and DNA sexing is recommended.

Juveniles have less yellow on cheeks, less red on forehead, and dark irises. 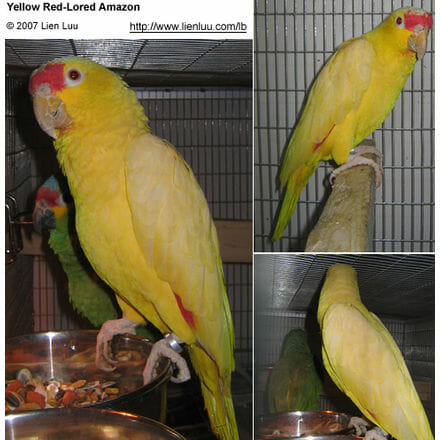 The Blue-fronted Amazon nests in tree cavities. The eggs are white and there are usually three or four in a clutch. The female incubates the eggs for about 26 days and the chicks leave the nest about 60 days after hatching.

Their natural diet consists of a variety of fruits, nuts and seeds.

Many consider the Red-lored Amazon to be one of the prettiest of the Amazon Parrots. They can make very affectionate, loyal and gentle pets.

Some make fairly good talkers. Like most Amazon parrots, they often have a tendency to vocalize loudly and biting can also become a problem.

Their behavior ranges from being quiet and curious to being aggressive, this can all be changed by basic training when the bird is of young age.

Red-lored Amazons are intelligent parrots that respond well to training.

They do discover their beaks as method of “disciplining us” once they are out of the “baby stage” and they can generally be somewhat naughty, and it really is important to learn to understand them and to guide their behavior before an undesirable behavior has been established.

Undisciplined amazons will chew on electric wiring potentially causing house fires. They regard anything in your home as a “toy” that can be explored and chewed on; destroying items that you may hold dear or are simply valuable.

Distribution: Western Ecuador North of the Gulf of Guayaquil in South America

Average Length: The Lilacine Amazon is a small parrot, approximately 34 cm or 13.6 inches long (including tail) when mature, with primarily green plumage. This subspecies of the Red-lored Amazon is generally smaller than its fellow subspecies, with a black beak and more subdued coloring. Like the Red-lored Amazon, it has red lores and yellow cheeks; its distinguishing features include a fully black beak, and lilac-tipped feathers on its crown