The Quaker Parrot (Myiopsitta monachus) is endemic to Central Bolivia and southern Brazil to central Argentina). This parrot got its name from the facial feathering that has a gray bibbed pattern, resembling an old fashioned Quaker costume.

The Quaker Parrot is the ONLY parrot species that builds its own nest made of sticks – rather than nesting in tree cavities, as is typical for parrots.

Quaker parrots don’t only build their own nests using twigs and other plant material, but they link their nests together to form structures akin to “bird condominiums” with individual chambers and separate nest entrances for each pay. These nesting structures can be the size of a small automobile and weigh 200 lbs (91 kg) or more.

The upper plumage is green. The face, throat, chest and legs are pale grey. The chest is brownish-grey, each feather edged with pale grey. The upper abdomen is olive-yellow and the lower abdomen, rump, thighs and upper tail-coverts are yellowish-green. The outer webs of flight feathers are blue. The tail upperside is green with a blue down center. The underside is pale green with a greyish-blue base..

The beak is brownish-horn colored; the feet are grey and the eyes are dark brown, with grey eye rings (periophthalmic rings).

Juveniles resemble the adults; but the grey forehead is tinted with green.

Quaker Parrots somewhat resemble the closely-related introduced parakeets; however, both of which are smaller and have green faces and chests; as well as an obvious yellow band on the outer surfaces of the wings: These species could only be confused by casual observers. 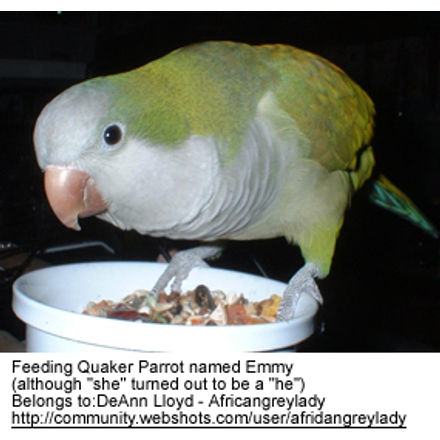 Native to, and generally common, in northeast Argentina where it occurs in the provinces of Entre Rios, Santa Fe, Cordoba and Buenos Aires; Bolivia; southern Brazil (Rio Grande do Sul); Paraguay; and Uruguay in South America.

Historically, this is a woodland species, but has adapted well to urban areas. 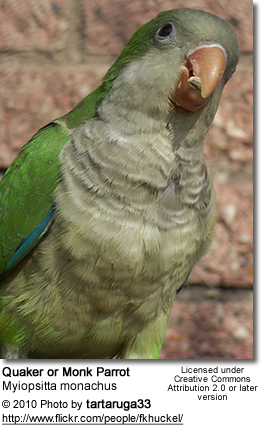 Their voices consists of shrill screeches, squawks made in flight or when perched; and loud chatters while feeding. These social parrots are usually quite noisy and in urban areas in particular can be considered a huge nuisance, as they form large, noisy flocks that can be heard for great distances.

Pet Quakers can irritate their human companions with their loud voices. So they are not recommended for those that are sensitive to noise. Quaker are, however, talented at mimicking human speech and other noises they hear in their environment.

Quaker Parrots often breed in colonies, building single large nests wth separate entrances for each pair. The nests are constructed out of sticks situated in trees or on man-made structures, such as radio towers, light poles and electrical utility poles. The exception is the Cliff Parakeets which nests in cliff crevices.

The average clutch consists of 5 – 12 white eggs, which are incubated by both parents for about 24 days.

Quaker Parakeet pairs may have “helper birds” that assist with feeding the chicks – often they are their grown offspring.

The following overview and table has been provided by Dr. Rob Marshall:

The Quaker Parrot, also known as the Monk Parrot, originates from South America. In the wild, these birds exist in large colonies with complex social structures.

They have an unusual ability to use twigs and pliable branches to build large, communal nests in which all members of the colony may breed. As a result of this rich social structure, the Quaker Parrot is a highly social, friendly and energetic bird and makes a wonderful pet.

They are playful, cheeky and inquisitive and make excellent talkers. The voice of the Quaker Parrot has a distinct croaky/clicking sound and raspy chattering is frequently heard from these birds. Socialisation and interaction form an important part of the Quaker Parrots daily routine. This positive training approach should be used to overcome the domineering behaviour that some Quaker parrots may exhibit. They should not be confined to the cage as this may lead to behavioural problems. Physically, the Quaker Parrot is a hardy bird and is able to tolerate cold temperatures well.

Quakers are active, inquisitive, mischievous, intelligent, playful, and engaging parrots. Their antics are a constant delight to their owners. They are completely devoted, bonding closely with their human owners. Purchasing a handfed, well-socialized baby is a good way to obtain a parrot with great pet potential, although with love and patience, most parrots can become great pets. Quakers are exceptionally hardy birds. They can live to be 25 to 30 years of age.

Quakers love their toys and will approach a newly introduced toy much sooner than the average bird.

They are strong chewers and can rapidly demolish even rigid items — which must be kept in mind for their safety. Keeping Quakers entertained will keep their minds off inappropriate activities.

They are also very “mechanically inclined” – being able to figure out most cage locks in no time, and disassembling toys with ease. Many pet owners describe how their pets industriously build nests placed around the house using shredded paper, pencils, tooth picks, or any material that they can find. Some single Quakers don’t actually build nests, but, enjoy weaving various materials through the bars of their cages.

Quaker Parakeets are usually very vocal and capable talkers. Many Quakers sing songs and pick up extensive vocabularies. Most Quakers learn to talk at about six months. They speak quite clearly and use their skills most appropriately. They can entertain themselves for hours chirping, whistling and practicing human vocalizations. The opinions as to how noisy they are as pets vary — some consider them very noisy, while others describe them as moderately noisy and might even enjoy their chattering. The rule, however, is that they will be noisier if other parrots are around, as they like to “hold long (and noisy) conversations” with them. The Quakers also acquire modeled loud sounds, such as barking, screaming and the chronic coughing of a human.

Quakers are notorious for being cage possessive. They could severely injure, or even kill, a bird that enters their cage uninvited. So it’s important to make sure that they are not placed together with other birds into the same cage until they have had time to bond with their prospective cage mate.

The Quaker Parakeets respond well to training. If these parrots are neglected, they can develop behavioral problems, such as screaming and aggressive behavior.

The Quaker Parakeets can develop behavioral issues, especially the following:

Quakers are usually pretty hardy — although can be afflicted with Fatty Liver Disease, which is mostly caused by all-seed diets that many well-meaning, but uninformed, owners provide them with. They should not be allowed to become overweight.

Feather plucking, and in some instances even self-mutilation (aka Quaker Mutilation Syndrome or QMS) are health problems that Quakers can develop. Purchasing a healthy, well-socialized parrot, and providing it with appropriate care and a stimulating and loving environment will be the best way to prevent these health issues. Once your bird has developed these health problems, an examination by an avian vet is strongly recommended.

Quaker parakeets are considered agricultural pests as they eat crop and build their nests in electrical installations.