The Red-faced Lovebird (Agapornis pullarius), also known as Red-headed Lovebird, has perhaps the longest expanse of territory of any of the lovebirds.

It is found in equatorial Africa, ranging from Sierra Leone to Lake Albert in Uganda. In the west of its wide range it extends down as far as northern Angola. This species has been introduced in Liberia.

This species typically settles along forest edges. On rare occasions, they are found in high forests. Outside the breeding season, they usually live in colonies of up to 30 birds.

During the day, they travel long distances to forage for food, which usually includes grass seeds, a variety of fruits and some cultivated crops. At night, they will return to communal roosts.

Curiously, they have been observed hanging upside-down, bat-like, from branches to roost or to engage in mutual preening. Captive birds have been reported to sleep upside down.

The Red-faced Lovebird may be the first lovebird imported into Europe. The Duke of Bedford mentions that it was used in portraits as early as the 16th century. 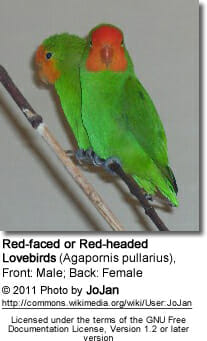 Their calls are weak and high-pitched; typically a twittering and trilling. Also abrupt, whistling notes can be heard when they are spooked or alarmed.

In their natural habitat, their breeding season starts at the beginning of the rainy season.

At this time, birds will pair off and build nests within ant and termite mounds located above the ground in trees or sometimes on the ground. The female may dig tunnels of up 30 cm in length.

They may nest in colonies with other lovebirds.

Their favored nest building / lining material includes seed husks and shredded grasses and leaves, which the female will transports by tucking them between her feathers.

The average clutch consists of five small eggs, which are incubated for about 24 days. Once the young hatch, they will stay in the nest for about 7 weeks before fledging.

Red-faced Lovebirds are uncommon in aviculture and are difficult to keep. Only few Red-faced Lovebirds exist in captivity. In the US, only a handful of breeders have had success with this species. The key to breeding these lovebirds appears to be in keeping pairs singly.

Breeding successes are rare — mostly because this nervous species easily succumbs to stress in addition to the difficulty of satisfying their specific nesting habits.

This species likes to burrow to make its nest and the nest chamber needs to be heated to about 27 degrees Celsius or 80.6 degrees Fahrenheit.

Some successes have been reached by inducing them to borrow into cork to build a nest.

One breeder, Grant Scopes, managed to produce young. He provided breeding cages measuring 40 x 20 x 16 inches and a nest box measuring 16 inches in length (the entire width of the cage).

The nest box was divided into 2 sections. One section was filled with peat, while the other section had a layer of wood shavings and peat placed at the bottom.

He noted that the parent birds began to dig out the peat and then dug through to the second chamber and had began to build a nest using grass and shredded newspaper.

The hen laid two eggs. He noted that theses lovebirds grew confiding surprisingly quickly. He fed them a variety of fruits, including apple, fresh figs, sweet corn and pyracanthaca berries.

He reports that the only green food they accepted was chick weed picked freshly from the garden. He also fed a good quality seed mixture (including a wild seed mixture) and some rearing food, grit and cuttlefish bone.

Water for drinking and bathing also should be available to them at all times.