They usually can be found in open forest areas or along forest edges, in mangroves, acacia scrub or wooded savannah, especially along rivers. They stay in pairs or family groups; however, occasionally larger flocks of up to 50 or more of them can be seen foraging at a favored feeding site.

Both males and females have vivid red wing-coverts after which they have been named. This parrot averages 12.5 to 14 inches (about 32 – 36 cm) in length. The red-winged parrot is sexually dimorphic (adult birds can be sexed visually by their physical characteristics). Mature hens and males have orange beaks, and grey legs and feet.

Males: Males are mostly green, with yellowish-green on the underside of the body. The forehead through the nape has a light blue tint. The scapulars (shoulder feathers) and upper part of the back is black. The lower back to the rump is blue. The tail feathers have a yellow tip. His irises are reddish orange.

Females: Hens are generally paler than males. Her plumage is mostly yellowish green. Her wings have a red and pink edging. Females have dark brown irises and the lower back and rump are a light blue. Females also have red wing coverts, but to a lesser extent.

Young birds look like females (hens) but have yellow beaks. Males attain their adult plumage when they are about 2 years old, while hens are sexually mature at about 1 1/2 years of age.

Sub-species Variations: In different localities, two to three different subspecies of the red-winged parrots exist, and slight size and plumage differences have been noted. 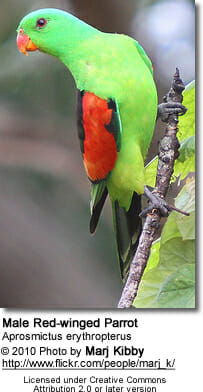 The red-winged parrots’ range extends from the Pilbara, Western Australia to Cape York Peninsula, Queensland, as south as northeast South Australia. They are also occasionally seen in Papua New Guinea.

Their diet typical consists of seeds from eucalyptus and acacia, as well as nuts, fruits (including berries), nectar, flowers, and insects and larvae.

They should be provided a wide range of food items.

The ideal composition would be:

*Please note: When feeding pellets to your pet, please be aware of the fact that overly feeding citrus fruits (including oranges) or vitamin-C-rich foods to your birds can lead to “Iron Overload Disease” as vitamin C increases the amount of iron absorbed from foods and supplements.

Dealing with Pests: Fresh foods in particular tend to attract a variety of pests (insects, mice). Placing the food dishes on a free-standing elevated stand or a pole, and spraying the legs/pole with oil (cooking spray) renders the “climbing” surfaces too slick for these pests to climb up on. To be effective, this coating would be re-applied several times a day. Another way of stopping some pests from climbing up to the food, would be to place the stand’s legs in bowls of water or some shallow body of water.

Their calls sound like “ching-ching”, “chink-chink” or a thin screeching.

Red-winged Parrots typically breed in spring and summer but breeding times vary depending on location. In their natural habitat, they usually choose a hollow space high up in a tree, about 11 meters from the ground. The hen lays three to six white, 31 mm long eggs a season, which she alone incubates for about 21 while the male forages for food and feeds both the hen and the young. The chicks are independent after about five weeks.

The Red-winged Parrot (Aprosmictus erythropteru) has hybridised with the Australian King Parrot (Alisterus scapularis)on several occasions. One particular specimen was described as having an overall dark green plumage with a red cap, bright yellow wing coverts, a green face, and red chest and abdomen from “chin” to vent. However, as is the case with most hybrids, the appears may differ widely. This hybrid is said to be fertile and breeds true to form.

Since this species is so uncommon in captivity and, therefore, quite expensive (up to a thousand dollars each), they are best suited for the experienced aviculturists.

Red-winged parrots don’t do well in cooler climates and shouldn’t be kept outside except in warmer / temperate-climate areas. Even in warmer climates, they still need heated shelters to protect them from cold spells.

They are best kept in pairs; however, mate aggression has been noted in some cases. Therefore, it is important to keep an eye on mated pairs and separate males should they turn aggressive towards the hens.

They need a roomy aviary, at least / about 8 feet long, 5 feet wide and 6 feet high. When constructing the aviary, avoid using galvanized wire for the enclosure as it contains zinc, which has been shown to cause heavy metal poisoning in parrots. A gauge of 1/2 inch by 1 inch, or smaller, is best to keep mice, snakes and other predators out of the aviary. Provide significant amount of natural perches. A well-planted aviary, especially with native species of trees or shrubs like acacia or eucalyptus, works best. Part of the aviary should be covered to protect them from the burning sun. Shadecloth put up over part of the aviary with convenient perches underneath would be suitable.

A shallow pan of cool water should always be available for bathing and drinking. These parrots generally enjoy bathing and there are multiple reasons both for their health and well-being to provide them with daily bathing opportunities.

Red-winged parrots enjoy toys for entertainment. Wooden toys, in addition to natural branches, satisfy their need for chewing. Very inexpensive toys can be made out of branches from non-toxic trees.

Ideally, the main aviary would be surrounded by another complete enclosure. This would prevent the parrots from escaping should the lock, for example, of the first aviary fail — the second enclosure would keep the parrots in safe confinement. Also, this set-up would literally eliminate the chances of a larger predator, such as a raccoon, fox or wild cat, from being able to pin a parrot by holding its toes as it grabs on to the side of the enclosure; or it would prevent them from grabbing the parrot’s leg or other body part through the wire.

Upon completion of the aviary and periodically, a thorough check should be done for any holes or gaps through which snakes and other pests or predators can get into the aviary.

These parrots are cavity nesters. In their natural habitat they will nest in tree hollows. In captivity, they will usually accept a nest box for breeding purposes. If they are kept outside, it is recommended that the nest box has a heat lamp or ceramic heater near it to protect the chicks from getting chilled during cold spells.

An average clutch consists of 3 to 6 eggs that are incubated by the female for about three weeks. The chicks fledge when they are about six weeks old.