The Uvea Parakeets (Eunymphicus uvaeensis), also known as Ouvea Parakeets, was once considered conspecific (of, or belonging to, the same species) with the Horned Parakeet of Grande Terre, but they have now been split into two species. 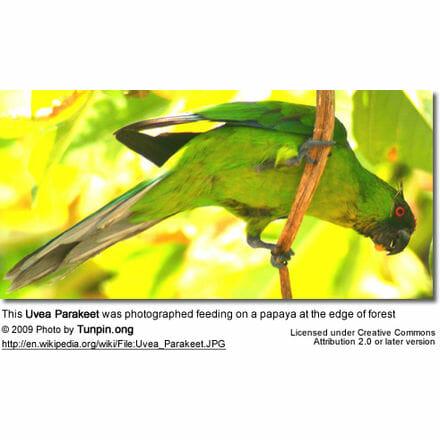 The Uvea Parakeet (Eunymphicus uvaeensis), also known as Ouvea Parakeet, was once considered conspecific (of, or belonging to, the same species) with the Horned Parakeet of Grande Terre, but they have now been split into two species.

The Uvea Parakeet is a parrot found on the island of Ouvea in the Loyalty Islands, New Caledonia. It once ranged across other Loyalty Islands, but attempts to reintroduce this species to Lifou in 1925 and 1963 failed, as the reintroduced birds simply flew back to Ouvea. This being said, nesting success on Lifou is unlikely unless the ship rat populations are controlled.

The Uvea Parakeet is threatened in its natural habitat by capturing for the pet trade and habitat loss as around 30-50% of its habitat has been lost in the last thirty years.

The Uvea Parakeet is a medium sized parakeet averaging 12.5 inches or 32 cm in length. The plumage is generally green; the underside tends to be yellower and there is bright blue on the wings and tail.

They look like the nominate Horned Parakeets (Eunymphicus Cornutus) but the ear-coverts (feathers covering the ears) and nape (back of the neck) are green, and only the center of the forehead is red. The facial area is greenish-black and the beak is black, lacking the yellow that can be seen on the face of the Horned Parakeet. The prominent crest consists of six green feathers that curl forwards.

Immature birds have shorter crest feathers and the cheeks are interspersed with green. The bill is horn-colored and the irises are brown.

These parrots are active in the early morning and late afternoon, and usually rest in the trees during the heat of the day.

They feed on a variety of foods, particularly the figs of the genus Ficus.

Within their natural range, the breeding season is from August to January. The nests are typically located in natural tree cavities in native trees.

Two to three eggs are typically laid and incubated for 21 days. The nestling period is around 43 days, with an average of around 1.5 chicks fledging. Fledging survival is lower, however, with around 0.75 chicks surviving a month after fledging. The main causes of the high chick mortality are starvation, Brown Goshawk predation and capturing for the pet trade.

Taxonomy / Other Names and Resources