Self-sustaining populations have established themselves in several cities in southeast Texas in the United States. It is unclear if the U.S. populations are feral released birds or may be some wild vagrants which have moved north from Mexico. The Green Parakeet is usually non-migratory, but will move depending on availability of food and suitable nesting sites.

This parrot is endangered in its natural habitat and is listed as CITES II. However, they are popular companion birds and are readily available in the pet market.

The plumage is mostly green with a yellowish-green to the breast and abdomen. Some Green Conures may have some scattered red feathers to their head. The under wing-coverts are dull yellowish-green and the underside of the flight feathers and tail are olive-yellow.

The periophthalmic (eye) rings are reddish-grey and the irises are orange-red. It has a yellowish / horn-colored beak with blackish markings to sides of tip. The feet are flesh-colored-grey.

Young birds have dark irises and lack any red feathers. 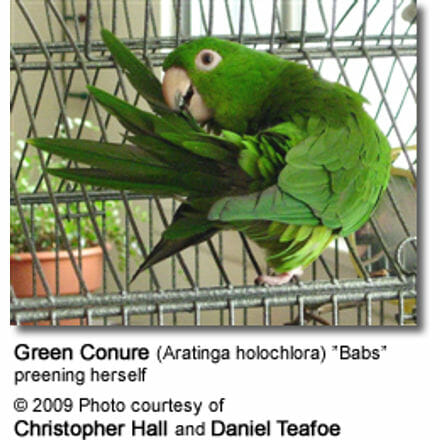 The Green Conures have big personalities for such small birds and are very active, requiring a good amount of exercise.

Owners report that they are smart and interactive, but are also more prone to behavioral problems than are cockatiels or budgies – but this would be the case with any conure.

They all require a committed owner who will work with their pets to guide their behavior, while cockatiels and budgies are “beginner birds.

These conures feed on seeds, various fruits, and corn. They are, at times, considered a crop pest. Wild birds primarily use scrub and swamp forests, woodlands, and forest clearings.

The U.S. populations take advantage of palm groves in the cities. 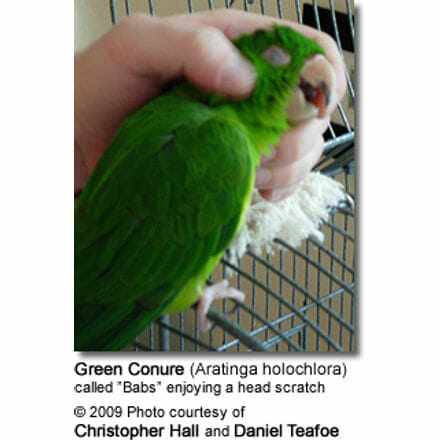 In the wild, Green Conure pairs usually find holes in trees to nest in where they lay 3-4 eggs. They will also nest colonially on crevices in cliff faces. After the breeding season is completed, the birds will form large communal roosts.

The preferences of the breeding birds can also be influenced by the size and type of nest-box / log in which the bird was hatched and reared.

If they are not accepting their nest box, it is recommended to provide them a choice of boxes / logs until they find one they like. They may also favor one particular area to nest in.