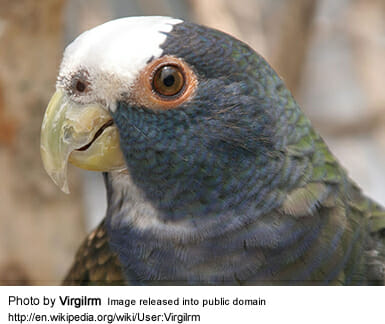 This small parrot is relatively common in captivity. In recent years, White-capped Pionus were imported in large numbers into the United States but are not commonly bred.

In the wild, White-capped Pionus can probably live up to 35-45 years or more. Little is known about their life span in captivity. Breeding age is approximately 3-5 years.

Their natural range extends from eastern Mexico to western Panama.It is found in tropical forests as well as oak and pine forests up to 6,000 feet (1600 m) altitude.

The White-capped Parrot feeds in social flocks of 30-50 birds, which may wander outside the breeding range once nesting has finished. They nest in tree cavities.

White-capped Pionus are listed on Appendix II of the Convention on International Trade in Endangered Species (CITES). Wild populations are generally large and locally common but are vulnerable to habitat destruction and have declined in some areas due to capture for export and use for pets locally in other areas. In the past very large numbers were traded and used locally for pets.

These parrots feed on taking various seeds, nuts and fruits, and can be pest in crops of corn or sorghum, and commercial fruit plantations. They can be unobtrusive when feeding since they are slow-moving and usually silent, well hidden in the canopy.

Their flight call is a screeched kreeah

The White-capped Pionus is a medium, stocky bright green parrot with a white crown. This pionus has a speckled brown patch on the dorsal wing-coverts and blue lacing on the neck. The under tail coverts are bright red as is the case in all Pionus. Primary and secondary flight and tail feathers are green edged in blue. Underside of flight feathers is aqua colored. The beak is horn colored and they have fleshy eye rings. The adult male has a white forehead and crown, the feature which, likened to an old man’s white hair, gave rise to the specific name senilis. The throat is white, and the rest of the head, neck and breast are dull dark blue. The belly is light green, and the upperparts are dark green, with a yellow-olive shoulder patch. In flight, the blue underwings and red vent are conspicuous features.

The female White-capped Parrot is similar to the male, but the blue plumage fades into scaling on the lower breast and the shoulder patch is duller.

Juveniles have little to no blue on the neck or red on the undertail and have a smaller white patch on the crown. Their crown feathers are green edged with white. The eyes or both juveniles and adults are dark brown.

White-capped Pionus are monomorphic (sexes are not visually distinct). Males are generally larger and have deeper and more extensive blue than females and have larger heads and beaks. Surgical sexing or DNA sexing must be used to confirm sex of breeders.

White-capped Pionus are popular and make excellent pets. Young birds are docile and tend to remain very tame and handelable if given a lot of attention. They are not known for their talking abilities. They are intelligent, inquisitive birds, but can be shy.

Mature birds, especially males, may become bonded to one person and aggressively protect that person from other people including other family members.

They are active by nature and may become overweight if closely confined.

Pionus parrots should be fed a formulated (pelleted or extruded diet) as a basis for good nutrition. Pretty Bird High Protein or Daily select is an excellent staple diet for Pionus parrots. They should be fed approximately 2 heaping tablespoons to ¼ cup of pellets. They will tend to waste less food if fed small sized pellets such as Pretty Bird Daily select small. The diet should be supplemented with the same volume of fresh fruits and vegetables daily to add variety and psychological enrichment. Monitor food intake. Overfeeding leads to pickiness, selective feeding and wasteful throwing of food. Pionus parrots should be fed little to no sunflower or safflower seeds or seeds should only be given as treats. Vitamin supplements are not needed for birds that are eating a formulated diet.

Birds, which are fed only seeds, will need vitamin and mineral supplementation to prevent deficiency diseases. Preferably vitamins should be added to soft food rather than putting in the water as this dilutes the vitamins, water soluble vitamins break down rapidly and water with sweetened and vitamins is a good growth medium for bacteria. Vitamin added to the outside of seeds is usually lost when the bird shells the seeds.

Pionus in general and White-crowns in particular are very difficult to handrear from the egg. They will do much better if allowed to be parent-fed for 1-2 weeks. They seen to require relatively high protein and fat in the diet. Pretty Bird 19/15 or 19/12 are suitable hand-rearing diets.

White-capped Pionus are very difficult to breed in captivity. In the wild, they usually lay 3-6 white eggs in an unlined nest, usually a natural cavity in a tree or a hollow palm stub. In North America White-capped Pionus breed predominantly in the spring and have a limited breeding season typically from February or March to June or July. Clutch size is typically 3 to 6 eggs. One inch by one inch by 14 gauge welded wire, or 1″ X ½ ” welded wire is a good choice for cage construction. A suggested size is 4 feet wide by 4 feet tall by 6 to 8 feet long suspended 4 feet above the ground or floor. When they are in breeding condition the eye-rings and feet become bright orange.

Incubation period: approximately 24-26 days. Chicks will usually fledge at approximately 8 to 10 weeks of age. White-capped Pionus are difficult to hand-rear from the egg. For best results they should be initially fed by the parents of fed very often in the first week. Pretty Bird 19/12 or 19/15 hand rearing formula is a good choice.

White-crowns are moderately noisy when in breeding season. When breeding Pionus parrots, noise and proximity to neighbors must be considered.

Male White-crowns can be aggressive toward their mates, as can sexually mature parrots to their owners. This is natural behavior but needs some training and understanding by the owner to prevent it from turning into permanent aggressive behavior.

Clipping the wings of the male prior to the breeding season may be necessary in aggressive individuals to allow the female to escape in case the male becomes aggressive. Males in breeding condition can be very aggressive to keepers.