The Yellow-lored Amazons (Amazona xantholora) – also also commonly known Yucatan Amazons, are only found in the Yucatan Peninsula and nearby islands,

They are common in their natural habitat yet rare in aviculture.

Within their natural range, they prefer tropical deciduous forests, tropical lowland evergreen forest, second-growth forests and woodlands. They typically occur at an altitude of 0 to 400 meters (0 to 1,640 feet).

These social parrots are usually seen in groups of 4 to 6 birds or larger flocks outside the breeding season.

They gather around in the evenings in roosting trees in large flocks of several thousand birds. At daybreak, they leave the roosting trees to feed on fruits, seeds and flowers.

Breeding pairs usually nest in tree cavities. Females lay 3 to 5 eggs, which are incubated for about 26 days.

The general plumage is green. Feathers are distinctly edged with black.

The forehead and forecrowns are white or, in some birds, cream. The lores (the regions between the eyes and bill on the side of a bird’s head) are yellow.

Primary coverts are red. The crown is dull blue with blackish edging to feathers. ear coverts (feathers covering the ears) are blackish.

The base to outer tail feathers is red. The bill is yellowish-brown and their feet are brown.

Females: are very similar to males, except her forehead and forecrown are -soft blue with faint red markings underneath the eyes to upper cheeks. The ear coverts (feathers covering the ear) are dark grey. The green primary (wing) coverts are intermixed with red.

Immatures: Juveniles mostly look like adult females, but their yellow lores (the area between beak and eyes) have scattered green feathers. The upper cheeks are green with a sprinkling of red. Young birds that have not gone through their first molt have a dull blue forehead. Red present in the wings of young males, but mostly interspersed with green in young females. The eyes are dark grey.

Sexing: Males and females look similar – except the white on the female’s forehead and crown are usually not so extensive The primary coverts are usually green, in some females several or all primary wing feathers are red.

Life expectancy: They may live 50 years or longer.

They make a variety of calls that could include loud trilling notes, squealing, barking, harsh crack notes, as well as short sharp sounds and trumpeting notes. The variety can probably be explained by their ability to mimic noises / sounds they hear in their environment. Many of them learn to talk as well.

As is the case with most parrots, most vocalizations are made early in the morning and in the late afternoon / evening. They also use them to communicate with their group or when alarmed.

They are generally quiet when perched in the trees, but noisy during flight.

Caring for the Yellow-lored Amazon Parrot:

These amazons are usually peaceful and can usually be kept with other species.

They are very active and should be provided the largest flight or cage possible. They have a tendency to get obese in small aviary or cage settings and require a lean diet. Their taking ability is very good.

A planted aviary is always preferable; however, if this is not possible provide the most spacious cage or flight that space and budget allows.

They need enough space to be able to fly on a daily basis. The recommended dimensions for an aviary would be 9 x 5 x 6 ft with adjoining shelter (5 x 3 x 6 ft); metal construction is advised, as they like to chew and could easily, over time, destroy an aviary made of wood.

For parrots that are generally kept indoors, it would be ideal to provide them with an outdoor space would be provided for enrichment, exercise and sunlight.

Minimum outside temperature they can tolerate is 65 Degree Fahrenheit (or 18 degree Celsius) during the acclimatization period. They are hardy once acclimatized. If temperatures go below that, heated areas need to be provided.

These parrots crave privacy and security and a “retreat” / secure area should be provided to protect against fear responses.

Durable cage construction is not as critical as it is for macaws and cockatoos, although metal aviaries are preferred to wooden ones. It may be recommended to use escape proof latches on cages / aviaries.

Amazons should always be provided with toys, blocks of wood or branches that they can chew. 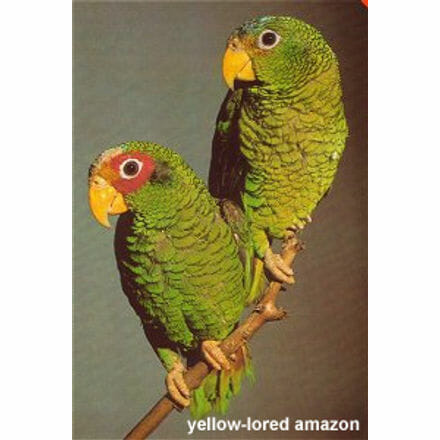 This amazon loves to fly and the ability to do so will prevent it from growing obese.

They can be very noisy in the morning and in the evening. They are easily tamed and usually get along with other bird species outside the breeding season.

During breeding season, they should be isolated from other birds. They are inquisitive and become easily confiding.

They enjoy bathing or being sprayed. A shallow pan of cool water should always be available for bathing and drinking.

There are multiple reasons both for their health and well-being to provide them with daily bathing opportunities.

Adding a few drops of GSE or hydrogen peroxide in its bathing water will help in preventing infections. As an additional benefit, GSE also has good anti-parasitic properties

They are very hard chewers and regularly providing them with fresh wood is recommended.

Their breeding season starts in March and goes on until August. In their natural habitat, they nest in hollow branches or tree cavities. Breeding in captivity is rare due to lack of availability of eligible birds. Breeding pairs should be isolated and high humidity levels should be ensured.

The female lays 3 to 5 eggs, which she incubates for 26 days. The young fledge after 7 weeks.