The Abyssinian Lovebirds or Black-winged Lovebirds (Agapornis taranta) are African endemics that occur naturally in the mountainous areas of Southern Eritrea and the southwestern highlands of Ethiopia, up to an altitude of 1,800-3,200m (6,000 – 10,000 ft) above sea level.

Locally, this bird is sometimes referred to as “Taranta” – after the Pass of Taranta in Ethiopia, where they occur naturally.

They typically live in small flocks of 4 to 20 birds. 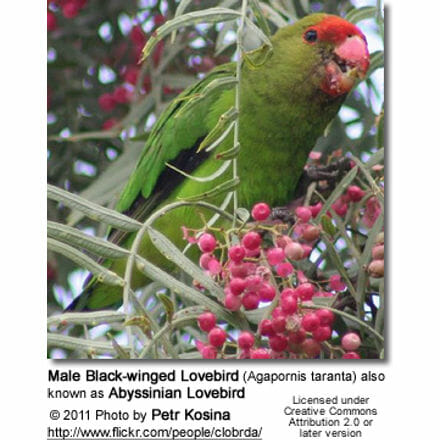 The nominate species (Agapornis a. nana) is slightly larger than its sub-species Agapornis taranta nana.

Some color mutations have been bred in recent history. 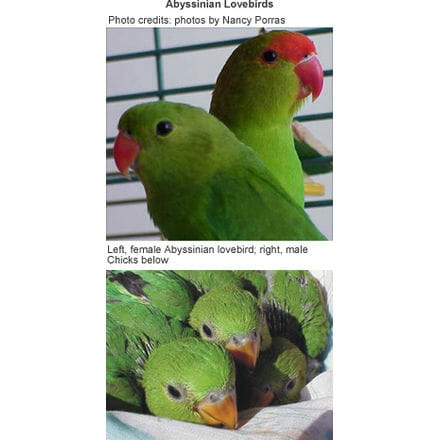 ID: Smaller than the nominate species, with a more intensively colored plumage. It has shorter wings and a smaller bill.

Interbreeding is likely to occur in captive situations.

Individuals occurring at higher altitudes are larger, but they are not subspecifically recognized.

The calls they make in flight are high-pitched, shrieky notes; or shrill, twittering notes. Captive birds are less noisy than other lovebird species, but their alarm and contact calls can be loud. Although for the most part, a harmonic twittering sound can be heard.

The Abyssinian Lovebird is reported to have a pleasant disposition. They tend to be more tolerant of other birds – provided plenty of space is available for all.

In cramped spaces, they can get aggressive and possibly cause injury. They are said to be less noisy than other lovebird species.

They are very social beings and are typically kept with another lovebird as companion to satisfy their strong need for companionship and they spend a good part of their day socializing and preening each other.

Hand-raised Abyssinians also make affectionate pets – although they do need a lot of attention if kept singly.

These active birds require a roomy cage that allows them to fly from one perch to the next and climb around. They need lots of toys to keep them mentally stimulated.

If kept in cages, they should be provided extended periods throughout the day to fly about and exercise outside the enclosures. 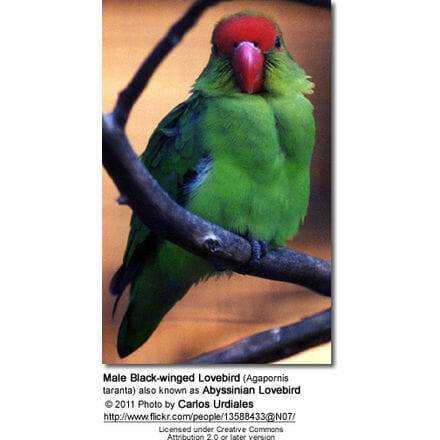 The Abyssinian Lovebirds’ breeding season within their natural range is recorded to commence in April and continues through September. However, nests with eggs have been found as early as March and chicks were produced as late as early November.

Their mating display is quite interesting. The male may jump over and around the female, with some shaking and scratching of the head to add interest. Once she is satisfied, she will let him know that she would like to be fed. He regurgitates food held in his crop into her open beak.

The nesting area is chosen by the female. It could be a crack in a rock or the dead limb of a tree, or a tree cavity. Outside the breeding season, these lovebirds typically use the chosen nesting area as a continuous roost for many years.

During the breeding season, Abyssinians are very territorial and protective of their nesting area, which they will vigorously defend against other pairs or intruders – to the death, if necessary.

They are not great nest builders and usually use very little nesting substrates. Materials found in nests have included bits of grass, bark, leaves, and the chest feathers of the hen.

The average clutch consists of 2 or 4 white eggs (rarely 5). The hen may start incubating after the first or second egg has been laid. The incubation period is about 23 – 25 days and the young leave the nest about 45 days after hatching.

The newly hatched chicks are covered with fine grey-white down, which will rapidly thicken as they grow. At around seven weeks, they are fully feathered and ready to leave the nest.

After fledging, the young will remain close to the parents who will continue to feed them for several weeks afterwards. In the wild, the Abyssinians tolerate their young quite well and form family units with them.

The young from previous years often assist their parents in raising the next generations. 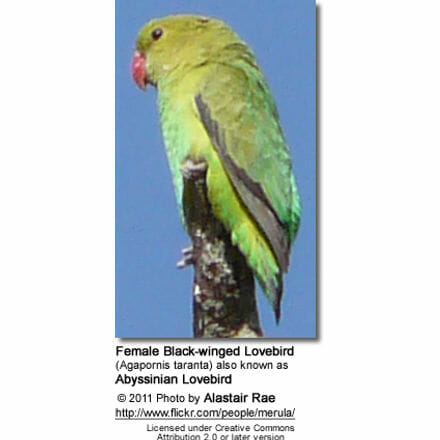 The Abyssinian Lovebirds are rare outside their range and difficult to find, mainly due to the challenges breeders face in breeding this species. Due to their high price tag, they are not commonly kept as pets and are probably one of the rarest lovebird species.

They are generally hardy (although to a lesser extent than say the Peach-faced Lovebirds). They are quite tolerant of cooler tatures, as long as they are protected from drafts and the temperatures are not overly extreme.

Obviously, as is the case with all birds, they need to be carefully acclimatized to local conditions.

Abyssinians prefer to breed during the colder season. The Abyssinian Lovebirds are unpredictable breeders. Some pairs are quite prolific while others show no interest in mating for several years.

One way to increase success is by allowing them to choose their mates naturally in a flock environment / communal aviary, and then to separate bonded pairs for breeding.

Pairs have even been unwilling to breed in communal aviaries and need to be kept singly – at the very least during the breeding season.

They didn’t even breed if their aviary was next to an aviary occupied by other lovebirds. They would still use the nest boxes for roosting, but they showed no interest in mating and producing young.

As a work-around, if aviaries are adjacent, hiding the nest boxes from the view of other lovebirds (with some dividers used between the aviaries, for example) may be a solution.

Several natural wood perches of various sizes / dimensions need to be provided, as well as plenty of toys to amuse themselves with.

These birds are intelligent and playful and spend hours amusing themselves with their favorite toy or game.

One game that has been observed is dropping of perches straight to the floor, but catching themselves inches off the floor to fly back up to a perch on the other side of the aviary.

The entrance hole should be in the upper center of the box and to keep the eggs from being dispersed at the bottom, a concave in the nest box floor is strongly recommended.

For roosting purposes, they will also use finch boxes hung near the nest box. In the wild, lovebirds use roosting boxes throughout the year and they should have access to one in captivity as well.

They are not avid nest builders – although the Abyssinian Lovebird hen may use her own chest feathers to line the nest with. It is important to line the nest box with a thick layer of suitable substrate.

Appropriate for this purpose are the following: dried grass (hay), peat and wood shavings, saw dust. It is recommended to microwave any dried grasses / hay for a couple of minutes to kill any pathogens.

Other lovebirds tend to use paper, twigs, leaves and other debris.

Box inspections are recommended when the pair is nesting to check on eggs and chicks. The nest box substrate should be changed once the nesting box gets too messy.

However, care needs to be taken not to scare / spook the parents enough to prompt them to abandon the eggs/ chicks or even inadvertently trample them.

The hen averages 3 – 6 eggs per clutch, which she incubates alone for 24 – 28 days, while the male feeds her and guards the nest.  The newly hatched chicks are sparsely covered with a grey-white down and have tannish colored beaks, which turn red as they approach the first molt.

Their eyes may not open until they are three weeks old.  They fledge when they are about 7 to 8 weeks old (sometimes earlier – may depend on the size of the nestbox).

In cases where the chicks need to be pulled and handraised, or feeding needs to be supplemented, Kaytee Handfeeding formula for Macaws is suitable and readily accepted by the chicks.

Once the young have become independent, it is best to separate them from their parents as the parents are inclined to pluck their young. Two breedings a year are typical. The immature birds are initially susceptible, but grow stronger over time. 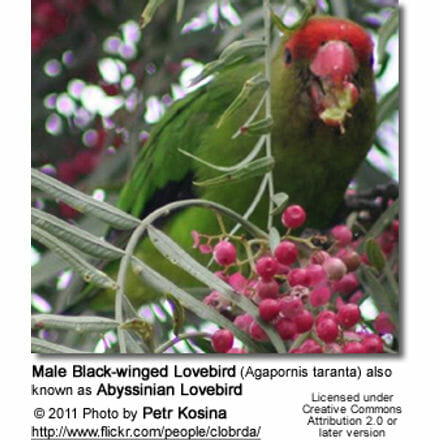 Their natural diet is quite diverse. They will feed on various small seeds, especially savannah grasses. They particularly seek out berries, fruits – the favorite of which being the fruit of the sycamore fig.

They will feed heavily on the berries of the juniper tree, which in large amounts is poisonous to some birds and mammals.

The juniper berries have a very high Vitamin B content — which meets the specific dietary requirement of the Abyssinian Lovebird.

In fact, the lack of success in keeping captive specimen alive is thought to be caused by a diet low in Vitamin B.

*Try soaking dry figs and juniper berries over night before feeding to soften them.

*Sprouted seeds, softened rusk and egg food should also be offered, particularly during the breeding season (rationed when not breeding).

Abyssinians require a higher fat content in their diet than other lovebirds; feeding additional sunflower seeds usually fulfills this requirement.

Mineral and oyster shell grit is also part of their captive diet.

Breeders also add avian vitamins and minerals to prevent nutritional deficiencies. Since this species is known for their Vitamin B deficiency, liquid B12 (i.e., Cytacon) may need to be provided twice weekly.

The Abyssinian lovebird is said to be a quieter and more intelligent than other lovebird species. It really is important to learn to understand them and to guide their behavior before an undesirable behavior has been established.

There are few things to consider …