During preening, birds gather oily secretions that contain diester waxes from their oil glands. This gland is located near the base of (just above) the tail.

Birds distribute the oil over the plumage. The function of this oil is somewhat disputed. All will agree that it serves to maintain and condition their skin and feathers. In all likelihood, it helps to waterproof the plumage (a concept that is not universally accepted, but appears likely – particularly in water birds).

However, some authorities state the water-proofing effect is primarily achieved by dense feathers that insulate by trapping air thus maintaining an air-tight surface and – in some birds – a water-tight structure.

Some bird species- those that are less likely to bathe or immerse themselves in water – produce feather dust instead of oil glands. They have powder down feathers that shed a very fine, white, waxy powder composed of keratin that is spread through the feathers when the bird preens itself.

This “dust” fulfills the same function of the oil glands, as it forms a waterproof barrier for contour feathers. Those species that produce the greatest amount of feather powder are Cockatiels, Cockatoos and African Greys.

The secretion from this gland also has antibacterial and anti-mycotic properties; as well as a potential odorant and/or pheromonal function (aids in the attraction of possible mates).

The oil glands of some bird species (i.e., Hoopoes) produce a foul-smelling liquid (specifically when breeding) that birds rub into their plumage. The bad smell is believed to keep predators away from nesting females and their young, as well as deterring parasites. The bad odor of the secretions ceases just before the young fledge. 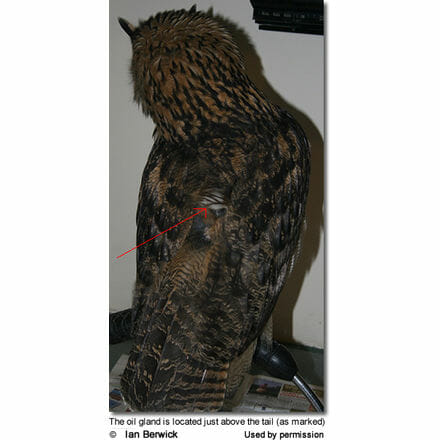 A well-functioning oil gland will help a bird keep the feathers in good condition, in addition to water proofing and insulating the plumage.

The gland occasionally gets blocked or stops producing some or all of its oil, at which point the feather quality typically deteriorates.

An impacted oil gland is usually clearly visible by the time you notice a difference in feather quality.