This lory is evaluated as Least Concern on IUCN Red List of Threatened Species. It is listed on Appendix II of CITES.

Sub-species of the Black Lory 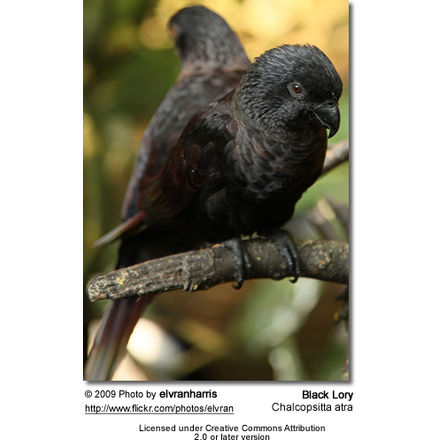 This lory averages 12″ (30cm) in length. One of the rarities of the parrot world, a nearly 100% black bird. The under tail is red and yellow. Young birds have red feathers scattered throughout the plumage.

This species – along with its cousins, the Yellow-streaked C. sintillata sintillata another very beautiful lory with a dark green body set off by bright red forehead, lores (the region between the eye and bill on the side of a bird’s head), thighs, underwings and the underside of the tail. The green parts of the plumage are covered with electric yellow streaking; and the Duivenbode’s C. duivenbodei which is mostly dark brown. The head is has a golden yellow ring around the face. The forehead is yellow. Underwings and thighs are bright yellow. There is a violet/blue patch on the lower back.

These three probably are among the best of pets. They crave human attention and love to rough house, but are also very gentle. Noise can be a factor, especially when excited, such as at feeding time, but their personalities greatly over come this negative. Handfed babies of all three species are in great demand as pets, but there is a shortage of female Duivenbode’s, so when possible sex should be determined and hens held for breeding. In my opinion, any of these make one of the best of the larger lories for pets. (Description by Dick Schroeder – Owner of Cuttlebone Plus and Expert Breeder / Keeper of Lories). 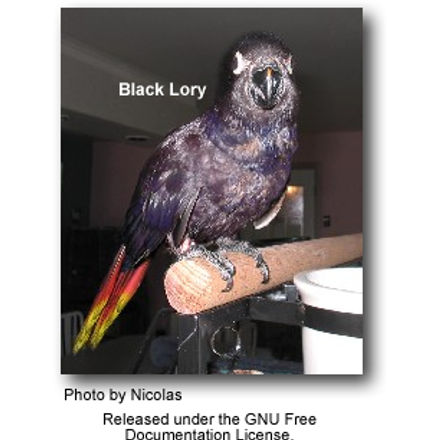 Black Lories are said to be amongst the gentlest and best natured of the lories. They are easily tamed. Their obvious drawback is the shrill cries they often emit. Not everybody can tolerate them.

The Black Lori, Chalcopsitta atra, is the least colourful member of an otherwise very colourful genus. It is, in aviculture, therefore the least popular. This is regrettable for it is equally as interesting as the other members of the genus. It is certainly one of my favourites ones. I acquired my first atra in 1971 and, since then, there has been a period of only six years when this species has not been in my care. Today, I keep the subspecies C. amsignis, the care of which is identical in every respect. (The only difference, in my experience, is that the nominate race can be sexed fairly readily by the larger head of the male whereas, in C. aminsignis, head size and shape is not indicative of gender.) The Black Lori measures 31 cm and weighs about 250g. Males of the nominate race are the heaviest.

The nominate race occurs in the westernmost part of West Papua (formerly Irian Jaya) – the Indonesian part of New Guinea. Specifically, they are found in the western Vogelkop, also on the islands of Misool (Maluku province), Batanta (Papua province) and Salawati (West Papua), off the coast. Handbook of the Birds of the World, volume 4, gives this information under the heading of Habitat for Chalcopsitta atra: “Open habitats including coastal plantations, grassy savannah and forest edge; also mangroves. Nypa palm forest, freshwater swamp and dryland forest; even very open stunted forest on limestone.”

When I kept Black Lories in the 1970s I was often asked by visitors: ‘Are they parrots?’ People found it hard to associate black plumage with a parrot. In fact, in sunlight it is evident that this species is not truly black: it has a plum-colored sheen. Some young adult birds and all immatures have scattered red feathers, usually on the head. One Black Lori developed these scattered red feathers after it had been in my possession for two years, and lost them two years later. A Black Lori bred at the San Diego Zoo in the early ’70s was almost entirely red in nest feather but moulted out black. The possibility exists that it was plucked in the nest, causing red feat­hers to appear, but this is not certain. It may be that the Black Lori evolved from a red bird and that these red feathers are an atavistic feature. Of course, C. aminsignis has much more red in its plumage and, to my eyes, is one of the most beautiful parrots in existence. You need to see a mature bird in sunlight to appreciate its beauty.

My first Black Lories were privately imported in 1971. Until that year only the occasional specimen had been imported into Europe; they were rare and expensive. It was not long before dealers started to bring in this species from Singapore and the price came down. Most of these binds were extremely nervous and took several years to settle down in captivity. They were nearly all wild-caught adults and did not adapt well to confinement. Losses during the first few months were high. Not many people persevered with them and inte­rest in this Lori was low.

In the late 1980s a few European dealers were foolish enough to flood the market with lories as the price in Asia was very low. During this period, from 1987 to 1990, 2808 Black Lories were recorded was being exported from Indonesia, but of course not all of them came to Europe. I would be surprised if even eight of them were alive today. This is a very wasteful trade with high mortality and a lot of suffering for the birds involved. Fortunately, commercial importation of this species into the EC was banned in 1991.

My first three birds were all females, although I could not be sure of this. I remember making a journey of several hours to acquire a male, only to reject the bird at a glance because it had a severe candida infection. This was common in newly imported birds and became serious if left untreated.

Finally, in 1975 I obtained from a friend a bird whose mate had died. I knew at once (before the days of surgical sexing) that I at last had a male. Its larger size and more massive head made both my birds look very feminine. The newcomer was housed with one of my birds and the first breeding occurred in 1977. This was the first time the species had been bred in England since EJ Brook was successful in 1909.The first clutch was laid during the second week in May, but did not hatch. The first egg of the second clutch was probably laid on July 9. On August 5 I heard a chick which could have hatched one or two days previously. On the following day work commenced on rebuilding the adjoining block of aviaries. A screen was erected so that the Black Lories could not see what was going on — but there was much disturbance which often brought the female out of the nest. However, she always returned in a matter of minutes. Two chicks could be heard in the nest. Both fledged but, sadly, one died soon after.

They were reared on the usual nectar mixture which consisted of glucose, malt extract, condensed milk and Farex baby cereal (later replaced by Milupa). Some wheat germ cereal was added during the nearing period. Occasionally ripe pear was taken; fresh corn on the cob was refused. In those days, of course, there were no commercial diets for aries. On this homemade nectar mixture they thrived. I have to say this is more than can be said for some commercial Lori mixtures. In my experience, one well-known product does not suit Chalcopsitta species. I ceased to use it after I lost two adult C. adnsignis and, at about three weeks old, a parent-reared C. scmntmllata chick. It is interesting that the Yellowstreaks have reared a chick in the two successive years on a diet of Nekton Lori, or Nekton and my own mixture, both being given each day during the second year. My own mixture now consists of malt extract and honey, with smaller amounts of CéDé Lori food and Complan. The Complan cannot be fed during warm weather unless the food is changed after about four hours, as the skim milk content turns the nectar sour. I do not recommend the Cédé as 100% of the nectar offered, as it is too thick. (It might be reformulated soon.) Here I would like to point out that on my nectar mixture of the 1970s the first pair of Duyvenbode’s Lories, C. duivenbodei, which neared young in the UK (in 1983, and still with Bob Gnantham) are still rearing young. They have been on this food for at least 22 years.Whereas some Lori species, and this includes Stella’s, Charmosyna papou goliathina, and Greennaped Lorikeets, Trichoglossus h. haematodus and Dusky Lanes, Pseudeos fuscata, seem to thrive on various kinds of nectar, I do not believe that this is true of the Chalcop­sitta species. This is, in part, because the latter take a larger proportion of their diet as nectar so if the nectar is not correct, they will not thrive. Black Lories take, in addition, fruit such as pear (not too hand or too soft), apple, and sweet oranges (preferably soft Satsumas) but grapes* and pomegranates are the preferred fruits. Soaked raisins* and sultanas are also relished. They are seldom interested in green foods or vegetables other than raw carrot. (*AvianWeb Note: Raisins have the potential of toxicity if fed in too high a quantity. Caution is advised. It is also recommended not to feed more than one grape to a LARGE parrot a day. Less for smaller birds. Some birds have developed renal failure because of grapes. )

The clutch size is two — invariably, in my experience. The incubation period is 24 days, although the first egg usually hatches after 25 days. Only the female incubates but most males spend long periods in the nest with the female. Newly hatched chicks weigh about 6g. They have whitish or pale grey down, dark brown beak and dank feet. Chicks are ringed at about 17 days with 7.5mm rings. From about this age the nest litter will need to be changed at least a couple of times a week, depending on whether there are one or two chicks. Nest inspection should take place fr­om a service passage and not by entering the aviary. Males can be loud and aggressive when there are young in the nest and entering the aviary will result in unnecessary confrontation. Also at this time, the wisdom of the use of notary feeders will be realised! Young spend ten or 11 weeks in the nest. Although there have been reports of aviary-bred birds breeding at the age of two years, it is more realistic not to expect eggs from a female until it is four years old.

On fledging the eyes are dank grey and the area of bane skin surrounding the eye is white (dark grey in adults). There are usually a few scattered red feathers on ear coverts (feathers covering the ears) and body. In birds kept outdoors, the peniorbital skin starts to turn grey (in patches) about four months after they leave the nest. In birds kept without exposure to sunlight, it might stay white.

Distribution: Occurs in the westernmost part of West Papua (formerly Irian Jaya) – the Indonesian part of New Guinea. Specifically, they are found in the western Vogelkop, also on the islands of Misool (Maluku province), Batanta (Papua province) and Salawati (West Papua), off the coast. … CITES II – Endangered Species