Blue-fronted Amazons are commonly seen as a pet in South America, the United States as well as other parts of the world, where they have been appreciated for their intelligence, beauty and talking abilities for over a century.

Their talking ability is ranked third among birds when compared to African Grey Parrots or Yellow-naped Parrots – although their talking ability varies greatly from individual to individual. Some speak nearly as well as the Yellow-headed Amazon group (Yellow-naped, Panama, Yellow-crowned, Double Yellow-headeds). The Blue-fronted Amazons seem to have a special talent for singing.

They require interaction but also can play with toys contently for several hours at a time. Pets require plenty of toys, perches, and climbing room. As with some other birds, under no circumstances are Blue-fronted Amazons to eat avocado. Some individuals, particularly males, can be aggressive in spring, the mating season.

Males tend to be slightly more aggressive – particularly when they are in breeding condition.

These parrots are hardy and have a long livespan – some living to the long age of 100 years or even older (oldest known lived to 117 years). 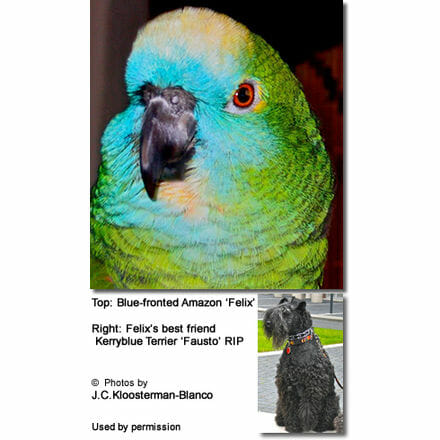 J.C.Kloosterman-Blanco send us a touching e-mail about his pet Amazon Felix (pleaes refer to photos):

“Our Bluefronted Amazon ‘Felix’ is 43 years old, lovely and stubborn as he can be, when in the mood he thinks he’s Pavarotti.

His best friend was our 15 years old Kerryblue Terrier ‘Fausto’ who sadly and, unfortunately, passed away two weeks ago, they were all the time together, wherever Fausto went Felix followed him. It was unique!

During the last two months Felix clearly wanted to care for Fausto in the most amazing way, he even climbed in bed to be by him as he knew the days were counted. When Fausto died we kept him at home for 48 hours and Felix would not leave from his side, not even for one minute! Unbelievable.

The days following Fausto’s death Felix has been terribly quiet. Here is a picture which needs no comments.

Also, we have Beatrix our Kerryblue Terrier,10 yrs. old but Felix and Beatrix have never been ‘friends’ and, although Beatrix highly ‘respects’ Felix and avoid him, everytime Felix gets the chance he chases her like telling her clearly enough ‘get lost’ in the most amusing way!

Our Felix is one out of millions!

Janet has been owned by Kaci for 30 years, raising him from a chick. She describes her experience of living with a blue-crowned amazon as follows:

“They are wonderful pets but they do have a tendency to get a little attitude of independence. You have to be careful. Sometimes for no reason he’d get aggressive but I think it was only if he was startled, scared or didn’t trust you. The center of his eye would get very small and that’s when I’d start the “big birds don’t bite” line. He knew what that meant.

I got Kaci at about 12 weeks. He didn’t even have all of his feathers and I had to feed him with an eye dropper every 3 hours. My husband did not interact from the beginning so he and Kaci had a love/hate relationship. He bonded very closely to me and he loved most women and children.

He started to talk within two months. If I’d been a trainer and really pushed it I think he would have talked a lot more. He spoke and communicated without repeating. He’d always say goodbye or hello or just Hi when coming or going, he’d tell you when he wanted to go to his room by rubbing his head and eyes and saying “Go Nite, Nite or Go to bed”.

He’d climb our carpeted steps with his brother cat and go to his room. If he wasn’t ready to go to bed after I covered him up he’d stand in the bottom of his cage and cry. I’d give him 5 more minutes of play time, wind up his music box cover him back up and he’d be fine. During dinner he ate with us and we shared the healthy food. If I had something he shouldn’t have he’d stand on his play stand and say Hmmmm,,, that good ?????  and beg like a dog. 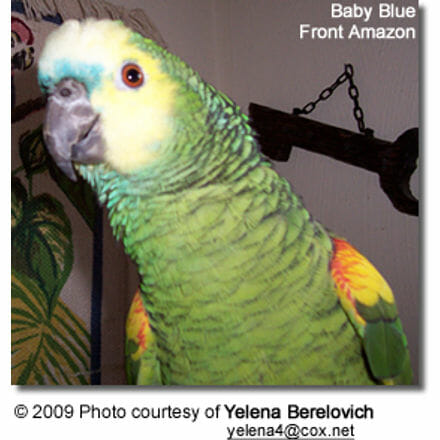 He’d always tell you to come here when he wanted something and if you’d call him he sometimes said “What?”. I didn’t let him fly so he didn’t really try very often. He did have a weight issue from his slow thyroid so it was dangerous to clip his wings in case he bailed out off of the cage on accident. I think if everyone handled this type of bird from infancy and formed bonds he wouldn’t become a one person bird like Kaci was. He had a lot of friends and he loved to laugh with you and loved company.

He sounded exactly like me (my friends said) and he even lowered his voice to imitate my husband when he said “Hi Buddy” when my husband would enter the room. They were definitely close friends in the end. It just took patience and time and a little bit of bribery  🙂

Since Kaci did have a bit of an aggression issue I was very careful when he was around children. Though, he loved it when kids came to visit and always wanted to be picked up and sit on our shoulders. He’d get very upset and fight me when I decided his time was up when playing with the kids. I’ve read that the younger you get your amazons and interact them with the family (kids included) the more likely you are to have a gentle kind bird. I believe that to be true.

Kaci wasn’t mean, he was just apprehensive of men due to my husbands attitude toward him as we were raising him. Kevin wasn’t always kinda at voice. He didn’t understand training and learning so he got bit a couple of times. I got bit too but you must know your bird’s moods. I don’t know anyone who has a bird that hasn’t gotten nipped a couple of times.

So, that’s our life with Kaci. I’d urge anyone to get a Blue Front Amazon. The younger the better.   Janet” 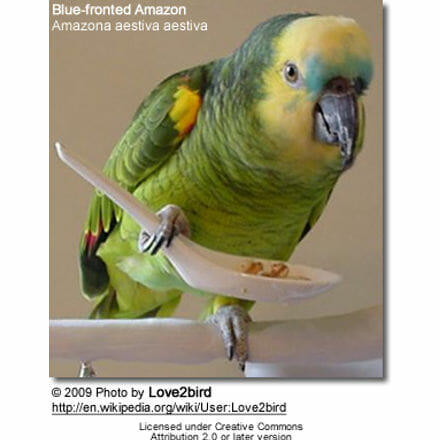 Amazon ownership generally presents multiple challenges, such as excessive chewing, biting or voicing – especially at certain stages in their life.