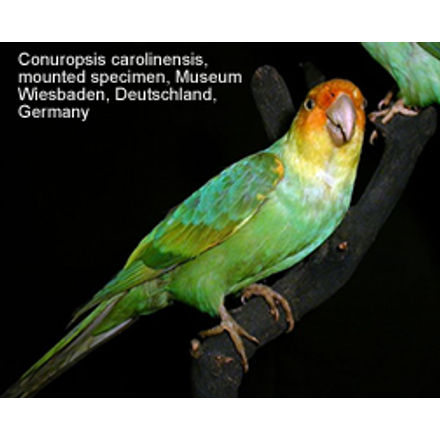 The Carolina Parakeet (Conuropsis carolinensis) was the only parrot species native to the eastern United States; where it was found from the Ohio Valley to the Gulf of Mexico, and lived in old forests along rivers.

The Carolina parakeet was an remarkably social bird, living in vast flocks.

The plumage was mostly green, with a yellow head, and red feathers in its face around the beak.

The Carolina Parakeet became extinct because of a number of different threats:

Their flocking behavior contributed to their extinction as they returned to mourn their flock members that had just been wounded or killed by hunters, making themselves easy targets.

The last wild specimen was killed in Okeechobee County in Florida in 1904. The last captive bird died at the Cincinnati Zoo in 1918.

Description: As Carolina Parakeet above, but generally more bluish; thighs without yellow; median and greater wing-coverts with pronounced yellow edging; lesser wing-coverts turquoise in many birds.