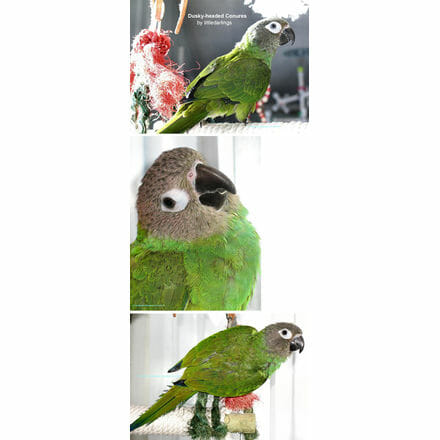 This Dusky-headed Conure Is endemic to and common in the western Amazon Basin, specifically South-eastern Colombia South through Eastern Ecuador to Eastern Peru, North-eastern Bolivia, Western Mato Grosso and Brazil.

These parrots prefer semi-open habitats, such as várzea, forest edge and forest remnants. However, they also occur in coffee plantations. It is generally common and its habitat preference makes it less vulnerable than many other Amazonian species.

This social conure is usually found in pairs or small groups. In areas where food is plenty, they may form flocks of up to 100 members.

Dusky-headed Conures are not common in the pet trade, but their popularity is increasing.

Their main diet consists of fruit, seeds and flowers. They will also search decaying wood for insect larvae. They ingest mineral-rich soil, e.g. from a clay lick, as a supplement.

The pair raises their offspring together, nesting in woodpecker holes in trees or arboreal termite nests. 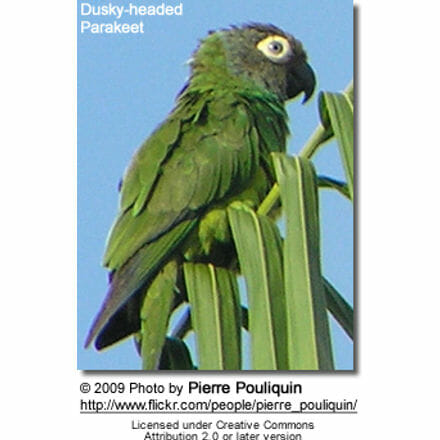 This long-tailed species is generally green in color; except the tip of the wing feathers and the tail feathers are blue.

Blue mutations are rare, but do exist in captivity.

The head is grey-brown. They have a blue-tipped tail and remiges (flight feathers – typically only visible in flight) that are dark gray from below, mainly blue from above.

The bill is black, and it has a broad bare white (sometimes yellow-tinged) eye-ring.

A blue mutation can be found in aviculture, although it is a rare find.

Both sexes look alike – if the gender is important (for example as would be the case with breeding birds), surgical or DNA sexing is strongly recommended. 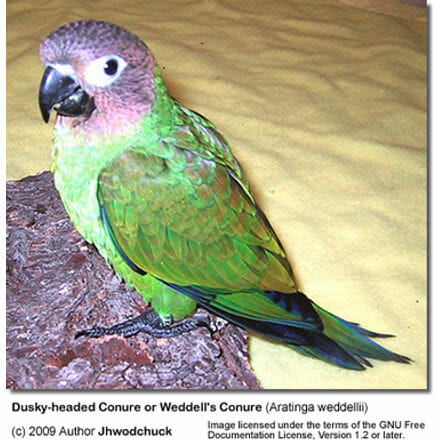 They are not known for their talking ability, but they are fun-loving, friendly and like to be cuddled – provided they have been hand-raised and properly socialized.

They are not as active or as noisy as some of the other species of conures, but they do tend to get loud when they get excited. Mostly, they are said to make a pleasant chirping sound.

They are relatively easy to breed. The nest box should be around 10 x 10 x 18 inches. They can have several clutches a year; however, good breeding practices stipulate that they should be allowed to have more than two or three clutches to allow them to rest, which is important for their health. The usual clutch size is 3 to 4 eggs, which are incubated for about 23 days. Both parents raise the young. The chicks fledge after about 50 days.