The Sun Conure, also known as Sun Parakeet (Aratinga solstitialis) is a parrot that is native to the north-eastern coastal forests of South America, specifically northeastern Brazil and Guyana. They were thought to occur in eastern Venezuela, French Guiana; Suriname. Their current status in these areas is unknown.

Within its natural range, this species is endangered by loss of habitat and trapping for the pet trade. Their numbers are declining, and they are now very scarce or absent across many parts of its former range. However, they are popular and relatively common in the pet trade.

These social parrots typically congregate in noisy groups of up to 30 individuals. They are often seen foraging on fruits, flowers, berries, seeds, nuts, and the occasional insects (particularly during the breeding season, when they require more protein in their diet.

Captive Sun Conures can live for 20 to 30 years – provided they are properly cared for and don’t fall victim to accidents. In the wild, they usually don’t live that long due to predation, accidents and adverse environmental / climatic conditions. These conures are old enough to reproduce (breed) when they are about 1 to 2 years old (some start sooner than others). They typically lose fertility as they age and are typically no longer productive at an age of 9 or 10 years. 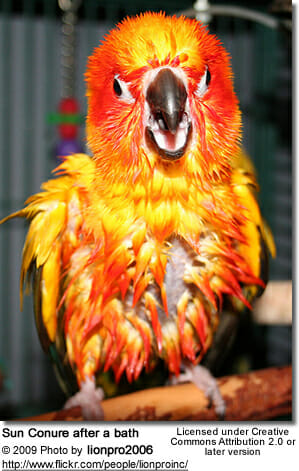 As with all conures, the Sun Conure has the bare, white skin patch around the eyes.

The plumage of the sun conure is a strikingly beautiful red/orange/yellow over most of the bird. The wings have a slight green on the wings.

Both males and females look alike. However, according to some breeders, one can take a guess by looking at the shape of the bird’s head. Females have a rounder and smaller head than the male. The male’s head is squarer, with a flatter forehead.

This method most certainly isn’t foolproof and if identifying the right sex is important, DNA sexing (or surgical sexing) is recommended.

Immature Sun Conures have a mostly green plumage. As they mature, more and more of their green feathers on the back, abdomen and head are replaced with yellow, orange and reddish feathers of the adult.

They usually attain their adult plumage when they are about 18 months old.

Reproductive maturity is reached when they are about two years old. 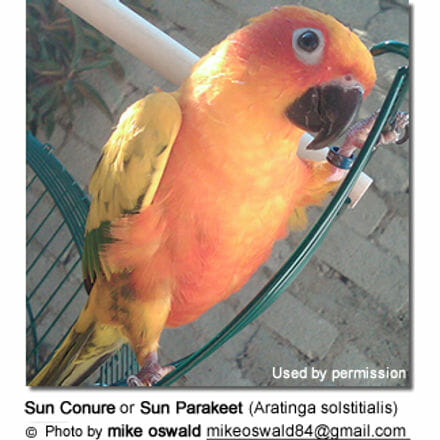 The Jenday Conure A.jandaya) looks similar, but lacks the yellow markings on the shoulders.

Sun Conures are most vocal in the morning and in the evenings.

In flight, they make screechy and rapidly repeated sounds.

While perched, chuckling and thin, high-pitched wheezy notes can be heard.

The Sun Conure is noted for its loud squawking compared to its relatively small size.

The bird is capable of mimicking humans but not as well as some larger parrots.

This being said, there are some amongst them that are very capable talkers. 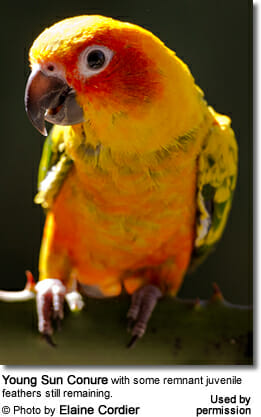 This is what Ellen Musgrove, from PA, says about her sun conure Princess, featured on this page:

My sun conure is 18 months old and can VERY verbally speak BRAT, OUT, LUV and MINE, EAT.

They are especially popular as pets because of their fun personality and bright coloration. Due to their inquisitive temperament, they demand a great deal of attention from their owners, and can sometimes be loud. Like many parrots, they are strong chewers and should be provided plenty of toys and natural branches to chew on.

They are very cuddly birds and like to climb in and under things. They love sleeping in a bird tent, although they usually chew on it and will destroy it in a few months. In nature, they spend considerable time “customizing” their nesting sites with their beak — this is natural behavior and the urge of chewing on their bird tent or nest box is an innate need that is natural and shouldn’t be discouraged. Some owners who are fed up with buying new tents every six months or so, prefer to provide a nesting box.

The below photos show very well the lovely personality of this little and colorful parrot.

Gerda George is equally enthusiastic about her Sun Conure. She writes …

“I was privileged to own a number of dogs, cats, horses and one mini parrot in my life — only the bird is my old-age companion now — talking to me as if i would be a parrot.

I let him fly free around the living room and kitchen as he pleases and did not cut his wings as the breeder and store owners suggest. Cutting a bird`s wings make him to be an invalid and i would not do that to Peetee!

He loves to watch T.V. – whenever he likes to leave his cage, he places himself in front of the gate and calls: “Peetee, Peetee pretty bird”.. again and again – until i open the gate of his house.

He thinks that i am Peetee and not he. At least that what he calls me when he wants something. I taught this phrase to him when he was apr. 3-5 months old — now he is going on two years old and he retained this phrase. He is a truly beautiful bird of many colors — a Sun Conure.

Whenever he roams flying or rests on my shoulder he would fly back to his cage, places himself on the open gate and goes to the bathroom — always in the same area – leaving his droppings. I have never found them in any other place in the house when he is out. I am so amazed as to how clean and intelligent these small creatures are.

Soo enjoyable – Peetee screams when i leave the room or house – and greets me when he hears me opening the garage-or house door. I do love all animals and their stories — they are so special.”

Amy Hayward reports the following about her pet Sun Conure:

I have a Sun Conure who’s age is unknown, but he is relatively young. He has lived with us for only 6 months and has learned to say “yeah” and “no” (two words that are said to him often, lol). While he does not say these words with much enunciation, you can certainly tell what he is saying. I am confident that, over the years, he will learn to say other words as well. It may be beneficial to your other readers to know that there is a possibility that their Conure might talk too.Thanks for all the info you give on your site!

They are monomorphic and reach sexual maturity at one or two years of age. In the wild, they typically nest in palm cavities.

The average clutch consists of 2 to 4 eggs, which are incubated for 23 to 27 days. While the female handles the incubation tasks, the male usually sits on or near the nesting box.

The young fledge (leave the nest) when they are about 8 weeks old.