The Glossy Black Cockatoo (Calyptorhynchus lathami) is the smallest member of the subfamily Calyptorhynchinae found in Australia.

The species is uncommon although widespread throughout suitable forest and woodland habitats in Australia, from the central Queensland coast to East Gippsland in Victoria, and inland to the southern tablelands and central western plains of NSW, with a small population in the Riverina. An isolated population exists on Kangaroo Island, South Australia.

This species inhabits open forest and woodlands of the coast and the Great Dividing Range up to 1000 m in which stands of she-oak species occur. In the Riverina area, they inhabit open woodlands dominated by Belah (Casuarina cristata).

The Australian Government has listed the South Australian race, (including Kangaroo Island), halmaturinus, as being endangered.

The birds are often found in open forest and woodlands, and usually feed on seeds of the Casarina (sheoak)

They feed almost exclusively on the seeds of several species of she-oak (Casuarina and Allocasuarina species), shredding the cones with the massive bill. 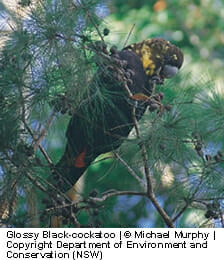 They dependent on large hollow-bearing eucalypts for nest sites. One or two eggs are laid between March and August. Three subspecies were proposed by Schodde et al. in 1993, though Forshaw has reservations due to their extremely minimal differences.

As this species is rare and at risk of extinction, every effort should be made to place any eligible captive glossy black cockatoos into a well-managed breeding program to ensure their survival.

If individuals of this species are not good prospects for breeding for whatever reason and you are considering it as a pet, the following should be of interest.