Coconut aka Massena’s Lories or Lorikeets

This species is endangered due to loss of habitat and capturing for the pet trade.

It is a subspecies of the Ornate Lory (Trichoglossus ornatus).

The plumage is similar to that of the nominate Ornate Lory — except the mostly green plumage is generally paler. The head is blue with lighter blue streak feathers moving backwards to a chocolate brown with lighter brown streaks.

The breast is reddish-orange with a very narrow dark blue edging. In some instances, some yellow areas in the chest plumage can be seen. The abdomen is green; but there may be some violet-blue marking in the lower abdomen.

The eyes are orange in the adult and brown in juveniles. The beak is an orangey red.

They may start breeding in September to October. The hen incubates the eggs for about 24 to 27 days and the young fledge when they are about 80 days old.

Lories as Pets or in Aviculture

Lories are typically quite easily bred, so mopular companion birds due to their intelligence, entertaining personality and stunning At times, they can even be seen sleeping on their backs.

They are known for their playfulness. In their eyes, evers around the cage are reco 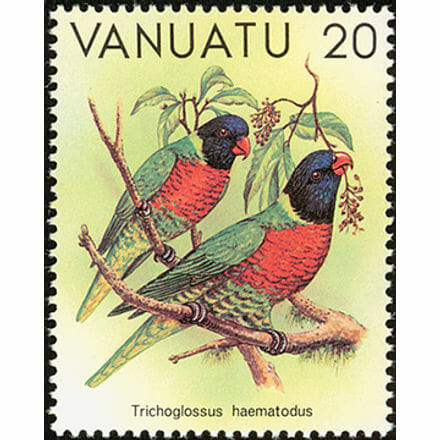