This parrot belongs to the genus barnardius, along with the Mallee Ringneck, Cloncurry Parrot, and the Twenty eight Parrot.

These parrots all have a green body and a yellow ring or collar around their necks and are referred to as Australian Ringnecks.

The plumage is mostly green. The head is dull black with cheeks tinged bluish. Some birds have a narrow red band to forehead. There is a yellow band to the nape. The lower back, upper tail-coverts and lesser wing-coverts are blue-green. The outer wing-coverts are yellowish-green.

The throat and breast are bluish-green. The abdomen is yellow turning yellowish-green on the under tail-coverts. The under wing-coverts are blue. The middle tail-feathers are bronze-green with blue tips.

The outer tail-feathers are blue with pale tips. The bill is grey-horn colored. The narrow periophthalmic ring is grey. The iris is dark brown and the feet grey.

Females have a slightly paler plumage. Her head is mostly brownish-black; and occasionally they have pale under-wing stripes.

Immatures have duller plumage. Their head is brownish. The under-wing stripe is present in young females, but usually absent in young males. 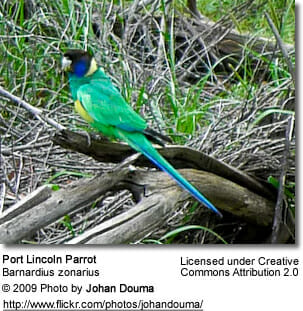 The Port Lincoln is quite easy to care for compared to other parrots, as long as you can accommodate its need for space and are not looking for a cuddly pet.

Port Lincoln Parrots are relatively easy to breed, as long as their need for space has been accommodated. They do require roomy aviaries.

These parrots spend considerable time preparing the choosing and preparing the nesting site. They line the bottom of the tree hollow or nest box with decaying wood dust and make a shallow depression for the eggs.

The courting male chatters constantly while crouching in front of the female, with his tail fanned and  moving quickly from side to side. During this mating display, he squares his shoulders and wings and vibrates them slightly. 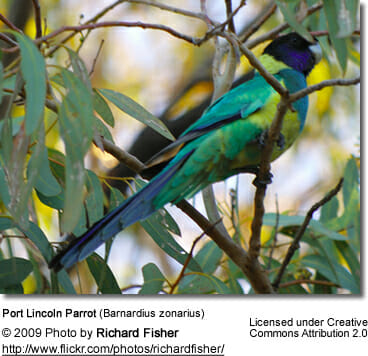 They are aggressive towards other birds, and it’s best to house them one pair per aviary. The minimum aviary size should be about 10 feet (3 meters) in length and 3 to 3.5 feet (about one meter) wide.

Double wiring between each aviary flight is necessary. Non-toxic leafy branches can be placed in the aviary for the birds to chew up.

This will entertain the birds and give the birds some beak exercise. Natural branches of various diameters, and placed at various angles, make great perches.

They require a quality parrot seed mix along with a variety of fruits, green leafy vegetables and vegetables. Seeding grasses and green can be offered.

Offering a choice of sizes and types of logs or nest-boxes, and placed in various locations within the aviary, will allow the parent birds to make their own choice.

They will readily nests in natural logs or nest boxes (24″ x 24″ high – floor area: 8 x 8 inches). The inspection hole should be around 4 inches (square or round). A removable top / lid is recommended for easy inspections and for cleaning.

The best location for the nest box / log is high in the covered part of the aviary, but not too close to the roof to be affected by heat from the roof in the summer months.

The young should be removed from the parent birds after they have become fully independent to avoid possible aggression from a parent bird and to allow the adult pair to possibly start another clutch.

The young reach full plumage at 14 to 15 months of age.